The controversial billionaire and hedge fund guru George Soros is undoubtedly one of the best investors on the planet today. At age 83, he is estimated to be the seventh-richest American, with a net worth of approximately $23 billion -- making him the world's wealthiest hedge fund manager as well.

Given his outstanding track record at picking winners in the stock market, he has also become one of the most closely watched money managers. The activity of Soros Fund Management draws interest from nearly every major media outlet on a quarterly basis.

One reason the Street eyes the Soros Fund like a hawk is because it has a long history of opening positions in extremely risky companies. Unlike most other funds, which tend to stick to tried and true names in their quest for stable long-term growth, Soros has shown a penchant for going after some of the spicier names in the market in the hopes of catching lightening in a bottle.

Soros buys a highly speculative biotech in the third quarter
The Soros Fund bought 25,000 shares of the struggling small-cap biopharma Aegerion Pharmaceuticals (NASDAQ: AEGR) in the third quarter. For those of you who haven't heard of this name, suffice to say that this was a surprising buy in light of the company's recent problems and poor outlook going forward.

After badly missing consensus sales estimates for its rare disease drug Juxtapid -- indicated as a treatment for homozygous familial hypercholesterolemia (HoFH) -- in the first-quarter, Aegerion continually lowered its 2014 sales projections throughout the year, and even tempered expectations for 2015. The net result has been, well, this: 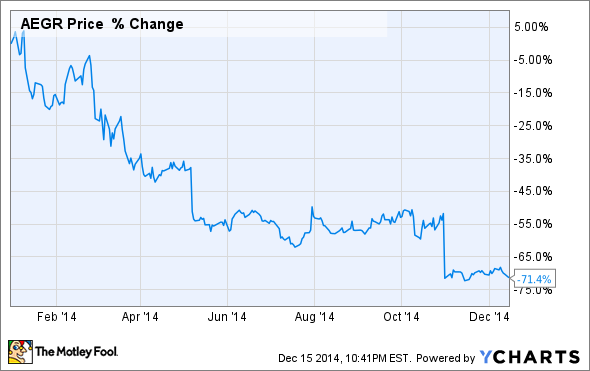 Most worrisome is that experts are predicting that the new class of lipid-lowering drugs known as PCSK-9 inhibitors, being developed now by behemoths like Amgen (NASDAQ:AMGN), Pfizer (NYSE:PFE), and Sanofi (NASDAQ:SNY), should make Juxtapid essentially obsolete. This assumption is clearly reflected in Aegerion's whopping forward price-to-earnings ratio, which stands at 104, despite a 71% decline in share price so far this year.

With the first PCSK-9 inhibitors on track to reach the market by mid-2015, Aegerion's main revenue source could come under heavy pressure.

Aegerion buys another rare disease drug to give investors hope
Although Aegerion's management is publicly stating that they expect Juxtapid sales to grow by roughly 30% next year because PCSK-9 inhibitors will "expand the HoFH market by identifying new patients", their actions speak louder than their words.

At the start of the fourth quarter, after Soros had taken a position, the company spent $325 million to acquire AstraZeneca's (NASDAQ:AZN) Myalept, a rare disease drug that treats complications of leptin deficiency in patients with generalized lipodystrophy.

There are two points to keep in mind with this purchase. First, Aegerion spent 88% of its entire cash position to acquire Myalept, meaning that it may have to resort to a secondary offering in order to raise the funds to support the drug's commercial launch.

Second, Aegerion is forecasting Myalept's peak sales to range from $200 million-$250 million. As with Juxtapid, these estimates appear to be overly optimistic. Put simply, drug companies tend to sell products at multiples of peak sales, not a fraction of them. Based on this price, AstraZeneca seemed to believe that Myalept was worth significantly less.

Soros has bought troubled biotechs before -- and lost
In the second quarter, the Soros Fund bought another high risk clinical-stage biotech in Sarepta Therapeutics (NASDAQ:SRPT), which ended up in disaster quite frankly.

As the story goes, Sarepta was on the verge of submitting a regulatory filing for its Duchenne muscular dystrophy therapy eteplirsen to the Food and Drug Administration. When the FDA questioned the integrity of the therapy's clinical data and required further studies prior to a formal review, though, Sarepta's shares plummeted. 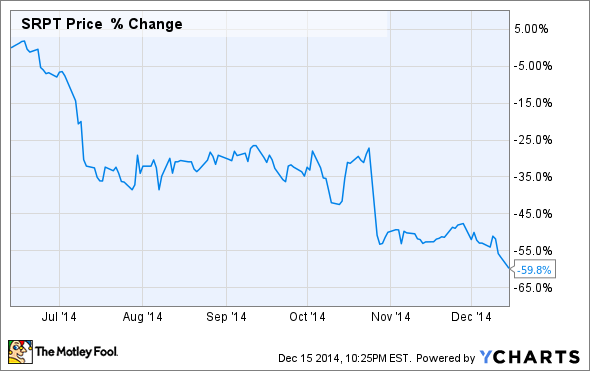 Per the third-quarter filings, we learned that Soros sold off most of this speculative position, taking a substantial loss in the process.

Is Aegerion a diamond in the rough or another Sarepta?
Regarding Aegerion, Soros' investing thesis appears to have centered solely on Juxtapid, as Myalept wasn't in the picture quite yet. Although it's impossible to say exactly what the fund saw in this stock at the time, one likely hypothesis is that Juxtapid sales won't crater after the introduction of PCSK-9 inhibitors into the HoFH market, making the stock undervalued at current levels.

As Amgen, Pfizer, and Sanofi are some of the best at marketing new drugs and have budgets that dwarf Aegerion's, it's hard to see this rosy scenario panning out. And indeed, Aegerion's purchase of Myalept looks like a last ditch attempt to generate growth at any cost. Aegerion thus appears well on its way toward becoming another Sarepta.