Windstream Holdings (NASDAQ:WINMQ) is running headlong into its upcoming REIT conversion. As a real estate investment trust with the purpose of managing Windstream's networking assets, paired with a separate operating business that sells services based on the REIT's assets, the company hopes to become more flexible and efficient.

Shareholders will get to decide whether to own the plodding but dividend-spouting REIT or the faster-growing service business. And oh yeah, the telecom's total tax bill will be lower, too.

Last week, the company refined its REIT spin-off plan, adding some new wrinkles to the reorganization. Here's what investors need to know about the fresh refinements.

First, the core Windstream company will retain about 20% ownership of the spun-out REIT -- but not forever. The company will hang on to 19.9% of the REIT's shares after the spinoff procedure, and then sell these shares "opportunistically" over the next 12 months. The resulting additional cash will be used to retire debt.

Windstream's management expects the retained shares to be worth roughly $1 billion. If the market agrees with Windstream's assumptions, that would put the REIT's initial market cap somewhere near $5 billion. Deduct that from the combined company's current market value of $5.2 billion, add back the $1 billion ownership of the REIT, and the operating stock should be worth a little more than $1 billion at first.

These estimates may not be correct, and the market will probably take some time finding the proper valuation for each of these new entities. But if management turns out to be in the right ballpark here, then the REIT maneuver would appear to unlock nearly $1 billion of additional value right off the bat. 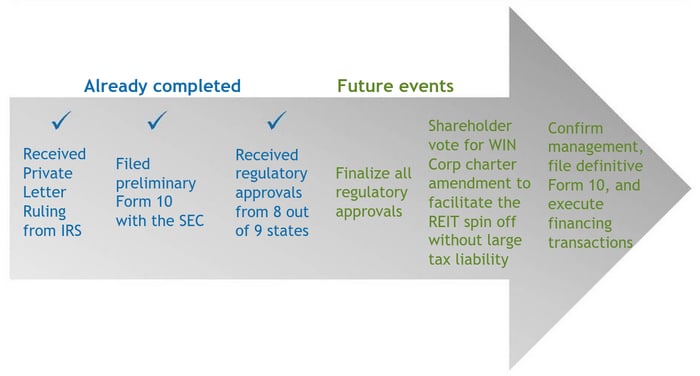 Here's how the REIT conversion process is moving along. Source: Windstream.

The operating company will also shift an additional $150 million of debt balances to the REIT, improving the balance sheet of Windstream "Proper" and placing a little more strain on the REIT's dividend payout ratios.

Credit ratings giant Moody's says that the new plan will indeed improve Windstream's overall credit quality, just not enough to affect its current ratings. Instead, the improvements serve to stabilize Windstream within the bounds of its speculative-grade Ba3 rating. That's three steps below what Moody's would call Prime or "investment-grade" credit quality, and Windstream is staying there until further notice.

Windstream is tweaking the deal in a couple of smaller ways, too. After the spinoff, the current Windstream stock will see a 6-for-1 reverse stock split. The company converts into a limited liability concern, wholly owned by the holding company that will be represented by the reverse-split shares. Doing so avoids a $600 million to $800 million tax liability, so the layered ownership approach makes sense from a financial standpoint.

These last two items must be approved by shareholders in a special meeting held on Feb. 20. I'd be shocked to see either point voted down, since reverse splits are a non-event for most purposes and the LLC conversion keeps a lot of money out of Uncle Sam's pockets.

So there you have it. With these tweaks, the REIT conversion is poised to deliver some additional debt reduction and a quick, tax-free spinoff process. None of these changes are expected to affect the dividend payouts per share for either one of the two post-split stocks.

The stock looks interesting as Windstream heads into the final stretch of its REIT conversion. Many investors could benefit from owning Windstream, but there are several different ways to go about it.

Investors strictly interested in dividends or growth stocks should probably hold off on buying Windstream until they can get their hands on the stock that represents their particular interests. Anyone else could jump in now, learn a lot from the conversion process itself, and save some money on trading fees by buying one stock instead of two.