I've been eyeing EOG Resources (NYSE:EOG) for quite some time. In my opinion, it's one of the finest oil companies in America. Its management team organically built what appears to be the best low-cost tight oil position in the country, and did so while maintaining one of the better balance sheets in the energy industry. About the only thing I haven't loved about the company is its valuation, which has never looked cheap to me. However, with the stock now down 24% from of its 52-week high, I might finally have the entry point I've been seeking. Let's see if we've reached that point.

Drilling down into the numbers
In late September, I took a close look at EOG Resources' valuation across a basket of valuation multiples. I compared the company to its historical average and to valuations at some of its closest peers. In both cases the stock appeared neither cheap nor overly expensive. In fact, as we see in the table below, the company's valuation at that time was pretty much in line with its historical averages over the past decade.

As the chart below shows, the company's valuation metrics at the end of the second quarter suggested the stock was fairly valued, at least historically. However, with the stock now off by nearly 25% and another exceptional quarter in the books, today we have a completely different valuation story. 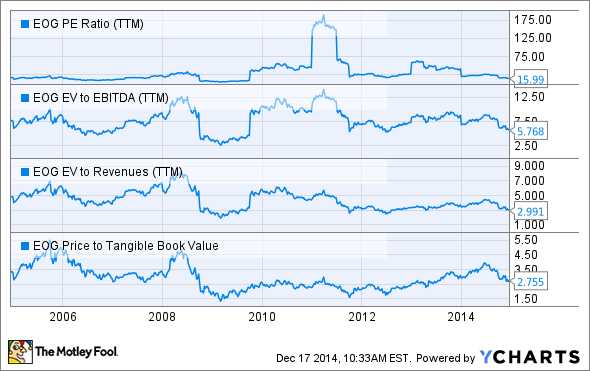 Another compelling reason to take a closer look at EOG Resources right now is because it is one of the few oil companies that can thrive in a low oil price environment. As the following slide illustrates, most of the company's key oil plays can still make money even at $40 per barrel. 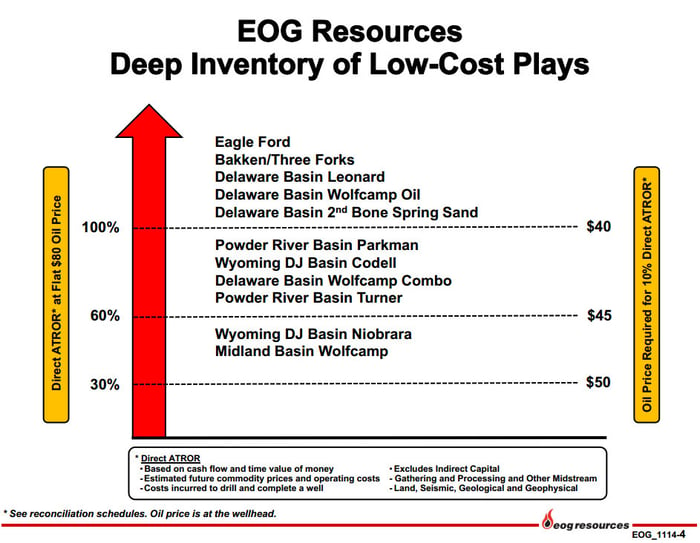 The company has over 8,000 future well locations in just the top three plays listed on the above slide. At its existing drilling rate it can drill in those three plays for more than a decade and still make plenty of money at current oil prices. That said, the drop-off in oil prices means the company's drilling rate will likely slow, as EOG Resources typically stays within its cash flow. However, even if it grows at a slower pace the company can still deliver very profitable growth in the years ahead.

Investor takeaway
Oil prices could continue to head lower and stay there for a long time. However, for investors who hold the opposite view and are bullish on oil prices over the long haul, it would appear now is one of the best times to buy EOG Resources' stock. Not only is the company's valuation compelling, but its balance sheet is in great shape and it is one of the few oil companies that can actually thrive with lower oil prices. This is why I'm seriously thinking about finally adding EOG Resources to my own portfolio.