Please ensure Javascript is enabled for purposes of website accessibility
Log In Help Join The Motley Fool
Free Article Join Over 1 Million Premium Members And Get More In-Depth Stock Guidance and Research
By Tyler Crowe - Dec 27, 2014 at 10:00AM

A golf clap for anyone that bought shares of these companies this year.

If you see any poor sap at the end of the bar drowning his or her sorrows, there's a decent chance he or she is an energy investor, and they have been looking at the performance of their portfolio for the year. So far in 2014, the Vanguard Energy Index Fund has lost more than 12% of its value while the S&P 500 has gained just a hair over 12%. 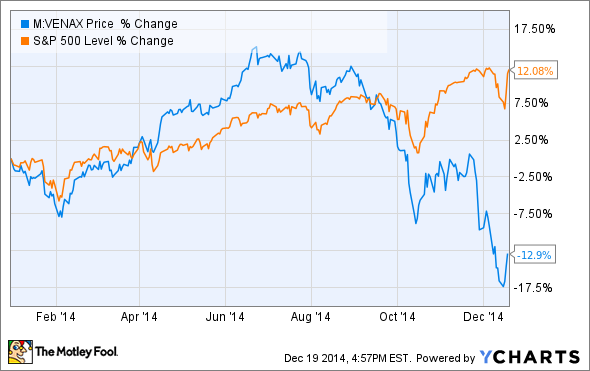 If you see that person at the end of the bar, be sure to wrap your arm around their shoulder and remind them that not every company in energy has been so miserable this year. In fact, the top five performers in the sector did pretty well -- and I'm not talking "skinniest kid at fat camp" good, either. Let's take a look at what the top five performers did this year to rise as much as they did. 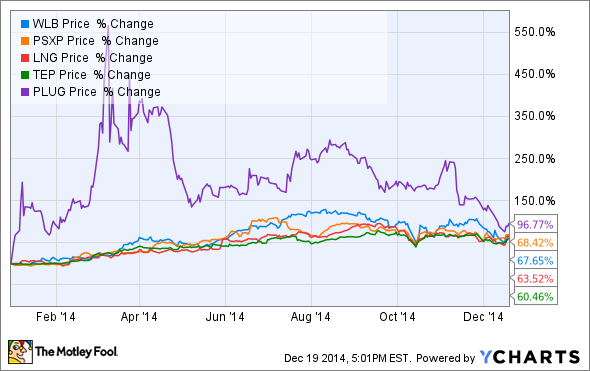 No. 5: Tallgrass Energy Partners (NYSE: TEP), up 60.5%
If the saying goes "when life gives you lemons, then make lemonade," then one of the themes for the energy world was if oil prices plummet, buy energy investments isolated from oil prices. Tallgrass certainly fits that bill with its interstate gas transmission lines and partial ownership of the Pony Express crude pipeline.

On top of the company's revenue security with fee-based contracts for its pipes, Tallgrass has been busy this year expanding its footprint through the acquisition of the Trailblazer nautral gas pipeline and the aforementioned share in Pony Express. These acquisitions have allowed the company to grow its distribution to shareholders by more than 50% this year alone, and with a solid balance sheet, it looks as though it's ready to keep expanding in one of the fastest-growing areas in the U.S. for oil and gas production growth -- the Rocky Mountains.

No. 4: Cheniere Energy (LNG -0.30%), up 63.5%
Four years ago, investors in Cheniere Energy probably wanted to have CEO Charif Souki drug tested when he announced that the company would start to pursue an export terminal for liquefied natural gas in the US. Since then, though, the idea has seemed even better, and the company has set itself up quite well in 2014 to meet those goals. Not only has construction of its export terminal stayed on track for first deliveries in 2015, but the company was also able to secure 20-year sale contracts that will transport 7.7 million tons per year of LNG.

With these contracts and the ones already signed, Cheniere's Sabine Pass facility -- Trains 1-4 -- are more than 88% contracted with those fixed-fee, 20-year contracts, and its Corpus Christi facility is now 62% contracted. Every day, this hairbrained idea is looking better and better, and the performance of Cheniere's stock in 2014 is a reflection of that.

No. 3: Westmoreland Coal (WLB), up 67.6%
Yes, you read that right, a coal company is one of the best-performing energy stocks of the year. When you look at the performance of the major coal companies so far this year, this one really stands out. 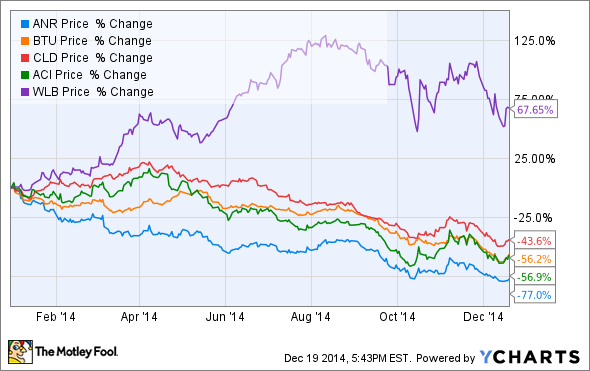 There are three things that has made Westmoreland do so well while the rest of the coal bunch has struggled: 1) It has been able to maintain cash flow from operations in excess of its capital expenditures, 2) It has a much more manageable debt profile, and 3) it has been able to grow production capacity through acquisitions as well as lower cost mines that have favorable long-term sales contracts in place. Overall, the market for coal doesn't seem to be in a good position, but Westmoreland is making the best of a bad situation while the rest of its peers suffer.

No. 2: Phillips 66 Partners (PSXP), up 68.4%
Like Tallgrass Energy Partners, Phillips 66 Partners is one of those investments that gives investors exposure to the energy space without the nausea that can come from volatile oil prices. However, this is a much more niche investment than other MLPs since it is a spinoff of Phillps 66's pipeline and logistics assets. So far, the partnership doesn't own very much, just a few refined product pipelines from Phillip 66's refineries as well as a crude import terminal and pipeline. 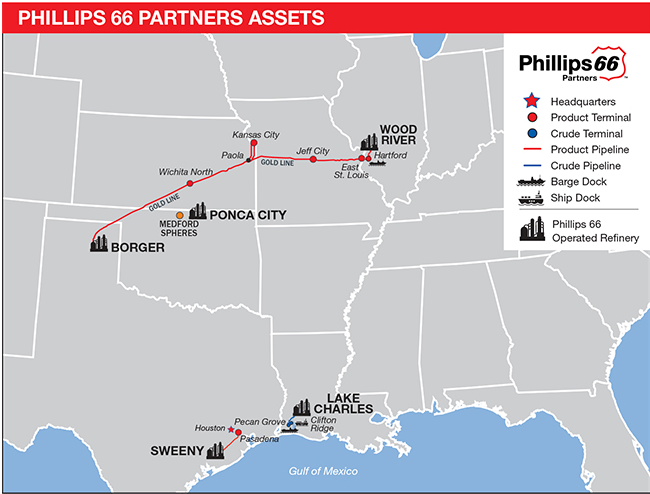 That being said, it has plenty of room to grow through drop downs from Phillips 66 and acquisitions from third parties. Plus with a distribution growth of near 50% year over year that is pretty safe -- a very impressive distribution coverage ratio of 1.3 times -- it's hard to argue with its success so far.

No. 1: Plug Power (PLUG 4.40%), up 96.7%
A near doubling in share price in 2014 is about as good as it gets. But shares of the company have been on a pretty steady decline since April after the announcement of the major deal it struck to supply Wal-Mart with hydrogen fuel cell battery replacements for its warehouse equipment.

So much of the company's performance this year has been centered around that deal, as investors got excited for the prospects of hydrogen fuel cells as another competitor in the "alternative to fossil fuel power" market. However, the company has not been able to deliver on the predictions that management made at the end of last year, so much of the hype has lost momentum. Could Plug Power gain it back? Sure, maybe, but it has a lot of operational things it needs to get right before it will be able to replicate this kind of success again.