In just the last three months, oil prices have fallen by 40% to their lowest levels since the financial panic of 2008-2009. Citigroup estimates this might provide the global economy with the equivalent of more than $1.1 trillion in stimulus. 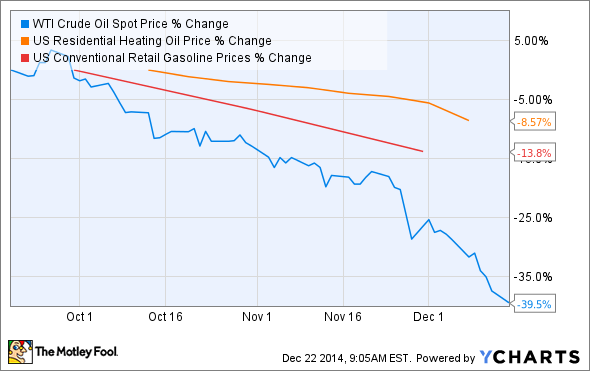 However, while the benefit to consumers is apparent at the pump, the potential threats caused by the pace and severity of the decline might not be. Let's explore two ways that rapidly falling oil prices might actually be a drain on the economy in the long term.

The effects of lower oil prices on U.S. job creation
As this chart shows, the U.S. shale boom has been a major growth catalyst for domestic job creation, much larger than the rest of the economy. 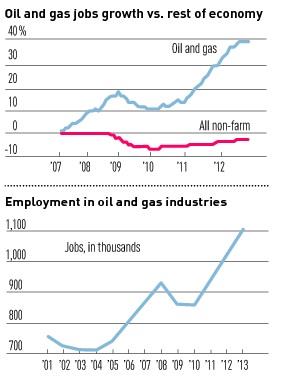 According to Investor's Business Daily, "Employment is up 40% in the oil and gas fields since the recession began in late 2007. But in every one of the 10 states where hydrocarbon production is on the rise, overall employment growth has outperformed the nation."

In addition, U.S. shale oil has attracted massive amounts of foreign investment, with 100 factories that will produce oil and gas infrastructure such as pipelines, servicing equipment, and drilling rigs, scheduled to open over the next two years. This is projected to boost the nation's economy by $300 billion and create an additional 1 million jobs. At least that was the plan before the bottom fell out of the oil market.

According to the Norwegian energy consulting firm Rystad Energy, the oil crash is likely to result in the delay or cancellation of over $150 billion worth of oil and gas projects around the world.  In total, 800 oil and gas projects worth $500 billion targeting 60 billion barrels of oil and oil equivalent might be cancelled or delayed if oil goes lower or stays suppressed throughout 2015.

Goldman Sachs believes the situation is much worse, with $60 per barrel oil threatening $1 trillion of new investment that would have produced an estimated 7.5 million barrels per day.This includes many U.S. shale projects in basins where the breakeven cost is now below the current $57 per-barrel price of West Texas Intermediate oil.

Already, ConocoPhillips, which has major operations in the Eagle Ford, Permian Basin, and Bakken fields, has announced plans to cut spending by 20% in 2015. Meanwhile, Chevron, which operates in the Permian and Utica basins, has decided to withhold its 2015 capital expenditure budget while it decides which projects no longer make economic sense.

In addition, Oasis Petroleum and Goodrich Petroleum have already announced 50% cuts to their exploration and production budgets next year thanks to crude's sharp plunge. To add insult to injury, Reuters reported that the precipitous drop in oil prices initiated a 40% decline in new drilling permits in November across all major U.S. basins.

With such drastic declines in energy investment, massive layoffs in the oil and gas sector are likely in 2015 and beyond, unless the price of oil recovers.

Energy junk bond crisis
Another potentially large threat to the U.S. economy might be a contagion effect resulting from oil and gas junk bond defaults. For example, according to Deutsche Bank, since 2010, energy companies have raised $550 billion in cheap bonds to increase oil and gas production and fund acquisitions.

As this table shows, the yields on the bonds of some of these sub-investment-grade companies have soared by 77% to 200% over their coupon rates as investors who own these debt holdings run for the exits in fear the oil crash will cause producers to default on their debts. Across the industry, the yields on these so-called junk bonds have soared 67% since June.

Energy XXI Vice President Greg Smith recently told Bloomberg, "we think the sell-off has been a little over done," and reassured investors that the company has "plenty of liquidity," and, "come January we'll be free cash flow positive," which is "a rarity in this business." However, the company did need lenders to amend its debt covenants in August as earnings declined due to falling oil prices.

According to Martin Fridson, chief investment officer at Lehmann Livian Fridson Advisors, 30% of high-yield energy bonds are trading at distressed levels. That means these companies might not be able to raise the capital they need to complete even their greatly reduced investments and service existing debts, and instead might be forced to sell assets at fire sale prices to stay afloat.

The fear over the inability to service or roll over high debt levels is partially why the collapse of the share prices of Energy XXI, Midstates Petroleum, Magnum Hunter, and Linn Energy has been more severe than the collapse in the price of oil itself. 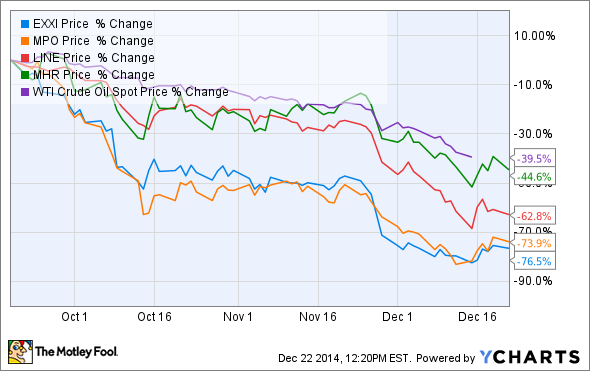 Another credit crisis brewing?
While the losses of junk bond investors might not seem particularly important in the grand scheme of the U.S. economy, it's important to realize that over the last few years energy has come to represent 22% of the junk bond market, up from 9% in 2009, according to Goldman Sachs and JPMorgan Chase.

Deutsche Bank said the spike in yield indicates the market is predicting a 30% default rate from smaller oil and gas producers, with JPMorgan estimating that, if oil stays at $65 for the next three years, default rates could reach 25%-40%. While JPMorgan believes that scenario is "unrealistically draconian," if it were to occur it could have broad implications for banks, asset managers, and pension funds. That's because, in an era of near-zero interest rates, these institutions have eagerly bought up these high-yielding securities.

Some experts, such as Larry McDonald, head of U.S strategy at Newedge USA's macro group, believe a massive series of energy junk bond defaults could set off another credit crisis. "This is the one thing I've seen over and over again," McDonald recently told CNBC, "When high yield underperforms equity, a major credit event occurs. It's the canary in the coal mine."

The takeaway: plunging oil poses economic risks as well as rewards
Don't get me wrong, I love paying less at the gas pump and to heat my home. But I also recognize that the recent boom in shale oil and ultra-cheap credit has left many oil producers up to their eyeballs in debt. In a highly complex world, where junk bonds are owned by banks, investors, and even pension funds, a series of bond defaults could have a powerful domino effect that might impact not just the United States, but also global credit markets.

In addition, the decline in new oil investments could result in a large number of layoffs within the oil and gas industry, which is responsible for 7% of U.S. gross domestic product.Should energy bond defaults result in a credit crunch this could drastically lower the energy market's access to credit in the coming years. That in turn could result in far slower oil production growth and higher energy prices in the future.