With oil prices continuing to plunge, oil companies really have no choice but to cut spending in 2015. This past week much of the news coming out of the oil sector had to do with capex spending cuts. Shale drillers Oasis Petroleum (OAS) and Goodrich Petroleum (NYSE: GDP) both announced spending cuts of around 50% while even the well-established oil giant ConocoPhillips (COP 0.39%) slashed its spending by 20% next year. We also learned that Chevron (CVX 0.57%) is now delaying the announcement of its capex budget until early next year as it decides on what cuts to make. Needless to say, capital spending in the oil industry is expected to see a significant drop in 2015.

Shale cuts the deepest
Years of outspending cash flow in order to chase shale growth has finally caught up with shale drillers. The sudden drop in oil prices is causing drillers to make deep cuts in order to make it through the current downturn in prices. That said, despite the deep cuts in spending shale drillers still expect to grow oil production next year.

Oasis Petroleum, which is cutting its capex budget from $1.43 billion to $750-$850 million still expects to grow production 5%-10% over the next year. A strong hedge position along with ample liquidity is expected to provide the company with the cash it needs to fund its 2015 growth plan. Further, the company still has very attractive economics even at a $60 oil price. So, while it is cutting spending in 2015, the company is still expecting to deliver economically driven growth and as the following slide notes it has a lot of options at its disposal. 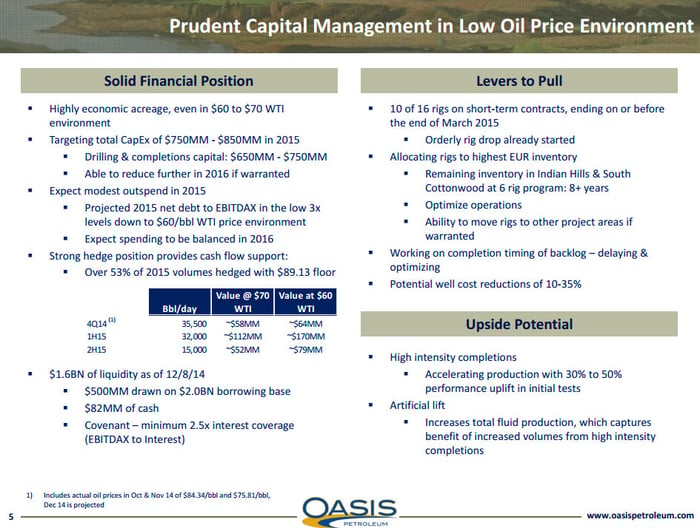 Meanwhile, Goodrich Petroleum is planning to spend $150-$200 million in 2015, which is about 50% less than the $375 million the company spent in 2014. However, those investments will still drive 30%-42% oil production growth next year, albeit off of a very low base. The reason the company is still in growth mode is because its costs in the Tuscaloosa Marine Shale are dropping while its results continue to improve. Further, the company also has strong oil hedges in place, plenty of liquidity and has assets that it's monetizing to bring in more cash. In fact, the company announced that it is exploring its strategic options for the company's Eagle Ford Shale assets. A sale of these assets could boost liquidity further which would allow it to expand its capital spending plan later on next year if oil prices improve.

Big oil cuts, too
Shale focused drillers, however, aren't the only ones cutting spending due to the current market conditions. America's top independent oil and gas company, ConocoPhillips, announced that it was cutting its spending by 20% in 2015. While those cuts were across the board, the deepest cuts were made to spending on unconventional exploration plays in the U.S. and Canada. Specifically, the company is deferring the development of shale plays in the Permian Basin and Niobrara as well as Canada's Montney and Duvernay shale plays.

That being said, it doesn't mean the economics of shale drilling are poor as ConocoPhillips is focusing its development efforts on the Eagle Ford and Bakken shale plays, where it enjoys the lowest cost of supply as we see on the following slide. 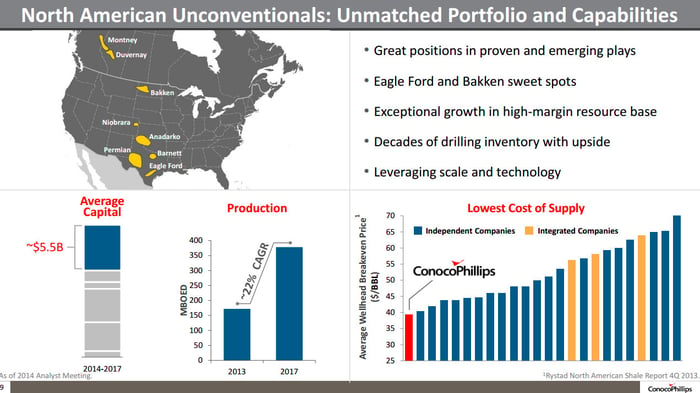 However, it's not just shale plays that are seeing capital cut. ConocoPhillips is winding down spending on major global projects and it isn't sanctioning any new major projects at the moment. Meanwhile, Chevron, which has $150 billion in major oil and gas developments currently in progress, is delaying the announcement of its 2015 spending plan as it reviews and evaluates spending in light of the worst slump in the oil markets this decade. Analysts now expect that the company will shave about 11% off of the $40 billion it spent this year. However, the company could make even deeper cuts and defer projects until there is more clarity in the market.

Investor takeaway
So far 2015 looks like it will be a much, much slower year for the energy industry. That said, despite all of the cuts drillers still plan to deliver production growth next year, though at a much slower rate than previous years. However, if demand for oil doesn't improve, and prices along with it, further cuts would be necessary as drilling shale wells becomes uneconomic at a higher price than where OPEC can drill. While the breakeven point varies, for a lot of drillers oil would need to fall another $20 per barrel or more before even deeper cuts need to be made.