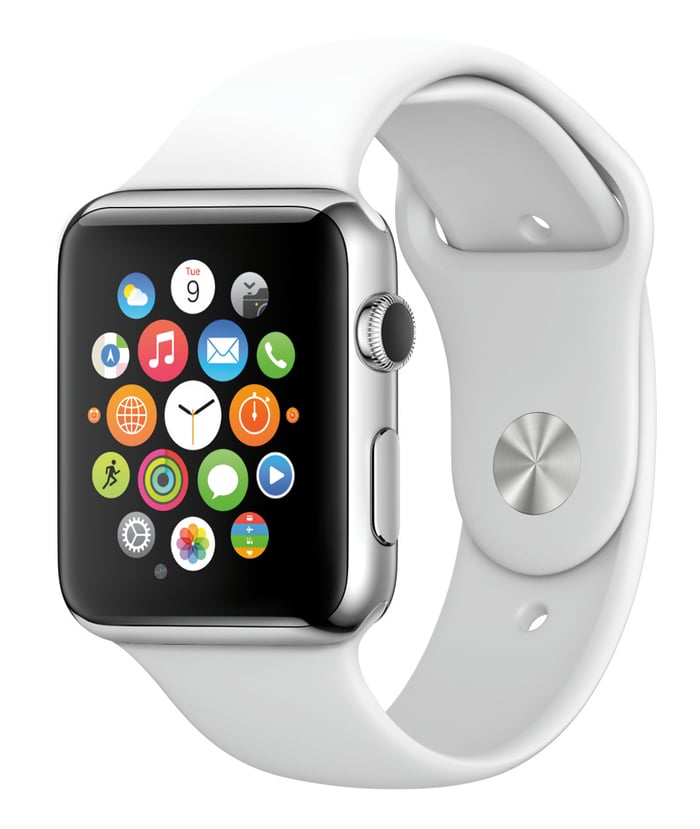 After Apple (NASDAQ:AAPL) regained investors' faith in 2014, plenty of prognosticators predict another home-run performance from the stock in 2015.

Overall, I agree that Apple still has plenty of near-term catalysts to support its recent rally. However, an increasing amount of the 2015 investing commentary I encounter on Apple seems to rely on the success of an unproven device -- the Apple Watch.

And not to rain on Apple's parade, but here are three reasons I'm not so sure Apple Watch will prove to be the growth catalyst so many people expect it to be in the year ahead.

Reason 1: Nice but not necessary
In my mind, the biggest argument against the Apple Watch is one of functionality, although clearly not everyone agrees with me here. In a recent research note, Global Equities Research analyst Chip Chowdhry argues, "Since Apple Watch extends iPhone functionality and provides user convenience with 'Glance' and 'Notifications' to an iPhone user, almost every current iPhone user will also be an Apple Watch user."

Pardon the skepticism, but I'm by no means convinced. It's certainly no grand insight, but it's also an inescapable truth that the Apple Watch does little more than repackage the functionality of a smartphone, only in a slightly more readily accessed package. In terms of a user value proposition, that falls well short of compelling to me, especially at a starting price of $349. I certainly believe that the wearables category as a whole could eventually usher in some genuinely game-changing functionalities, like advanced integrated biometric sensors. However, the absence of these more revolutionary innovations will probably limit the Apple Watch's appeal among consumers when it's launched next year.

Reason 2: Apple Watch economics
Although it's difficult to measure in the absence of the kinds of device teardowns that follow the release of any new Apple product, plenty of estimates have emerged as to just how financially accretive the Apple Watch will prove to be.

There are a few things to consider here. Although other devices contribute significantly, the iPhone is in many ways the true financial engine that makes Apple's money machine hum. It accounted for 56% of Apple's sales in its recently completed fiscal year, a number that should increase in the quarters ahead because of the likely windfall success of the iPhone 6. It's also important to understand because of that incoming iPhone-related sales glut and the iPhone 6's roughly 70% gross margins, the Apple Watch's lower-margin profile is more likely to lower Apple's overall gross margins next year. Also, although Apple doesn't break out device-specific costs for investors, it's probably fair to assume that Apple will have to lean heavily on its famous marketing machine in 2015 to raise the awareness of the Apple Watch, which will increase the costs associated with the Apple Watch. And if you assume modest initial Apple Watch sales in 2015 (more on that in a moment), all these factors combine to a sense that the Apple Watch will be more of a financial headwind for Apple in the year ahead.

Reason 3: A victim of its own success
The final reason not to get overly excited about the Apple Watch next year boils down to Apple's sheer size. We all know it takes billions, not millions, in new profits to generate a meaningful impact to Apple's bottom line. However, it appears that Apple Watch is less than likely to produce this kind degree of financial windfall, especially in its first year on the market.

Of course, no one knows what Apple Watch's 2015 sales will look like, so let's work with some of the more "consensus" estimates. Recently, Piper Jaffray noted that Apple analyst Gene Munster published a research note arguing that the Apple Watch will generate 10 million unit sales in its first 12 months on the market. Now, in the context of the still-nascent smartwatch market, 10 million sales would certainly establish the Apple Watch as the dominant device in the industry. However, assuming a $500 average selling price, those 10 million Apple Watch sales would translate into only 2% of Apple's annual sales. Again, Apple's simply so big that the Apple Watch will have to absolutely shatter initial sales estimates to make a meaningful contribution to Apple in 2015.

Still plenty to like about Apple
To be clear, I'm still confident that Apple stock is headed in the right direction. I don't want to come across as overly negative. My real point here is that in the context of all the other storylines in motion at Apple, I believe Apple Watch will prove to be a relatively low-level contributor to Apple's financial performance in 2015.

Apple has plenty of tailwinds that should help support a rising stock price, the iPhone 6 supercycle, and a new capital return program, among others. So while I remain bullish on Apple, I won't be holding my breath for Apple Watch to change the game financially for Apple in the year ahead.