Here's how GM will expand Cadillac's product line to take on the Germans.

The latest Cadillac to be unveiled is the high-performance CTS-V sedan, set to go on sale next summer. A slew of new Cadillacs will follow. Source: General Motors.

It was one of the more surprising trends of 2014: After a big year in 2013 -- and in a market where luxury sales have continued to be strong -- General Motors' (GM 0.81%) Cadillac brand had a very tough year.

Through November, Cadillac's 2014 U.S. sales were down almost 20%, a number that isn't expected to change much when December's totals are released next week.

There are several reasons the old luxury brand's sales fell this year. But most observers agree that Cadillac's tiny product line is a big part of its problem. Here's why.

Cadillac's current models don't come close to covering the market
Cadillac is undergoing a huge overhaul. GM's plan is to boost Cadillac's quality and reputation up to the levels enjoyed by Mercedes-Benz, BMW, and Audi -- and to boost its profit margins as well.

That work will unfold over the next several years. But Cadillac is being held back by a host of issues now, starting with this one: Its product lineup consists of just six models.

As you can see in this slide from a presentation given by Cadillac president Johan de Nysschen in November, those models don't come close to covering all of the segments that make up the premium market nowadays. 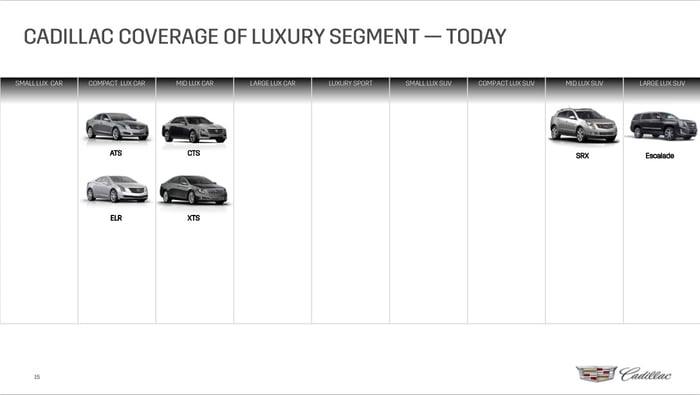 Whatever else may be wrong with Cadillac right now, it can't compete with BMW and the others in many market segments because it just doesn't have the products. A buyer looking for, say, a big luxury crossover like the Audi Q7 is going to skip right over Cadillac because Cadillac doesn't sell anything like that right now.

And given the boom in crossover sales, that right there is a big part of Cadillac's problem right now. 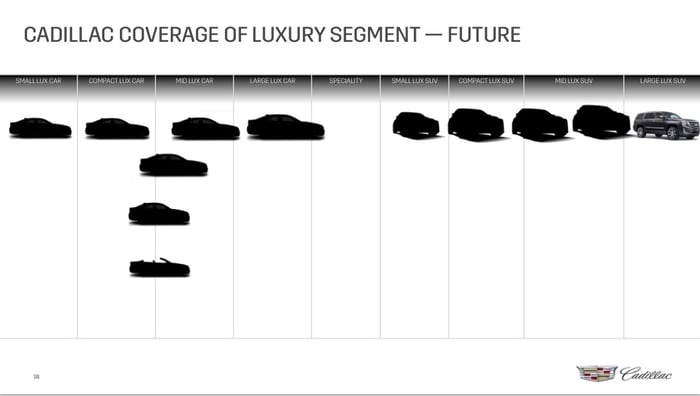 So, what does this all mean? Let's go left to right.

Small luxury car: That's one size smaller than today's Cadillac ATS, comparable to the Mercedes-Benz CLA or the Audi A3. GM has hinted that it wants such a car in order to draw younger buyers to the brand. But it's not clear what this car will look like or when it will arrive.

Compact luxury car: That's today's Cadillac ATS, including the new-for-2015 coupe version (and the new-for-2016 high-performance ATS-V variants). GM has dropped hints that a convertible version of the ATS coupe could be in the works; if so, expect it as a 2017 model.

Sales of the ATS slumped in 2014 after a strong debut in 2013, but this new-for-2015 coupe version could help spark a rebound next year. Source: General Motors.

Midsize luxury car: Right now, that's the rear-wheel-drive CTS sedan, new last year, and the slightly larger front-wheel-drive XTS. GM has hinted that the XTS is a transitional model; it may be phased out after a few years.

Large luxury car: GM is expected to unveil an all-new large Cadillac sedan this spring. It'll be called the CT6, it'll be based on a new rear-wheel-drive platform, and it'll be offered with a bunch of new high-tech features (including a plug-in hybrid drivetrain).

This slide released by GM last fall is believed to show the general shape of the upcoming Cadillac CT6. Source: General Motors.

The CT6 is expected to go on sale next fall as a 2016 model. De Nysschen has hinted that an even larger and more expensive sedan could be in the works, but that's unlikely to appear before the end of the decade.

Small and compact luxury SUVs: Cadillac desperately needs more crossovers, particularly small crossovers. At least one of these is likely to arrive in the U.S. as a 2018 model -- but there have been hints that it could be launched a year earlier in China.

Midsize luxury SUVs: The current Cadillac SRX has been a strong seller since its introduction, but it's nearing the end of its model life. Spy photos have already surfaced of its successor, which is expected to arrive at dealers in about a year. It's likely to have a new name, XT5, following Cadillac's new global naming scheme. There's also a larger Cadillac crossover expected in 2018.

Many changes are coming to Cadillac, but GM isn't expected to mess with the big (and profitable) Escalade. Source: General Motors.

Large luxury SUV: This is the Escalade, the brash truck-based luxury SUV that is all-new (and much-improved) for 2015. It's a hugely profitable product for GM, it sells well, and it isn't going anywhere. But GM is likely to add a diesel or hybrid option (or possibly both) over the next couple of years.

The upshot: More evidence that GM is serious about this Cadillac thing
A half-century ago, Cadillac was a dominant and respected luxury brand. It has fallen a long way since then, but GM's efforts to turn that around are already bearing some fruit: The ATS and CTS are arguably the best sedans Cadillac has ever built.

If GM can maintain that level of quality while expanding the brand's lineup, it could very well become a serious global luxury contender over the next several years. De Nysschen has made it clear that GM is going to try. Will it work? We'll find out.