Like that old E.F. Hutton commercial, when billionaire value investor Seth Klarman speaks, people listen. Or they should.

The somewhat reclusive Klarman has developed a cult following among investors who have watched him found and turn the Baupost Group into the world's 11th-largest hedge fund, with roughly $30 billion in assets under management.

If you want insight into his investment methods, you can pick up a copy of his classic book Margin of Safety -- currently fetching $1,700 on Amazon.com for a used copy.

At the end of last year, when Klarman had 40% of his portfolio sitting in cash and felt he could find no more opportunities in the stock market, he returned $4 billion to his investors.

So when Klarman finds stocks worth investing in, people take notice. And when he dumps the stock, that registers just as high on the register of investor psyche.

A big bet on casinos
Earlier this summer, the billionaire took an interest in Boyd Gaming (NYSE:BYD), amassing a 2.8 million-share stake worth almost $34 million. It was a relatively small position within his portfolio as a whole, but it would have put him within the top 10 institutional holders of the casino operator's stock.

Yet just as quickly, he dumped it. Baupost's third-quarter filing with the SEC showed the legendary investor had sold two-thirds of his holdings.

What initially attracted Klarman to Boyd, just as he was also establishing positions in the following companies?

And why did he get rid of the casino operator while pretty much maintaining his positions in the other companies?

Without exposure to the biggest gaming tables in the world, Macau, Boyd Gaming is suffering from a dearth of gamblers. Photo: Amiga-Commodore via Flickr.

A classic value play?
Boyd is a beaten-down gaming stock that has been one of the weakest casino operators in the past five years, generating a return of just 37% compared to the 122% return to investors in MGM Resorts International (NYSE:MGM) and the 269% return from Las Vegas Sands (NYSE:LVS). 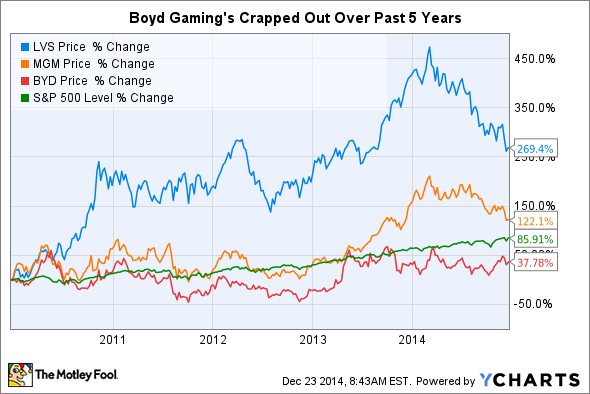 Although it has operations in several regional markets, its biggest bet is in New Jersey's Atlantic City, where Boyd has a 50% partnership in the Borgata hotel and casino with MGM. The profitable Borgata provides a large part of Boyd's revenue, accounting for 28% of its net total in the third quarter.

But East Coast gambling mecca is dying. The Revel, Trump Plaza, and several other casinos have all disappeared from the boardwalk this year. The Taj Mahal might not survive long into 2015.

And Boyd has no exposure to the biggest gambling center in the world, Macau. The regional markets and even the Las Vegas casinos it runs don't attract the big money like the Chinese special administrative region does, and that leaves a major void for growth. 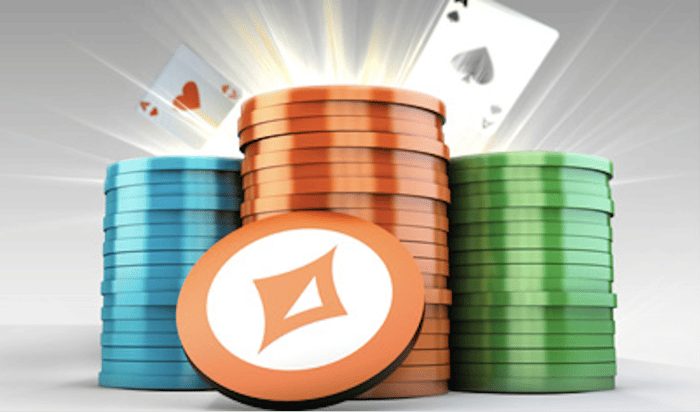 Online gambling was legalized to help casinos in New Jersey, but it hasn't worked out as planned. Image: PartyPoker.net.

Betting it all on red online
What might have attracted Klarman, however, is New Jersey's online gambling opportunity.

Legalized last November as a means of reviving struggling casinos, pundits estimated it had near-$1 billion potential in just its first year, and Boyd's Borgata jumped out to the forefront with a 38% share of the online gambling market through its partnership with partypoker.

Unfortunately, the reality has not lived up to the hype, and that might have discouraged the billionaire investor. Through the first 11 months of 2014, Internet gambling in New Jersey has generated just $111 million in revenue. Last quarter, the Borgata's take was $6.1 million, down from $6.7 million in the second quarter and off further from the $7.7 million it recorded in the first.

Boyd Gaming's stock has bounced 35% off its October low as third-quarter revenue beat expectations, even if adjusted profits fell short.

Hedging a bit for insurance
Klarman's entrance into and exit from the casino operator might not have been the best, unless he timed it just right, but Baupost Group still has a position of nearly 1 million shares that has gained nearly $2 million in value since he updated his holdings last month.

That means he hasn't given up completely on Boyd Gaming, and that's a message its investors might need to hear.