Please ensure Javascript is enabled for purposes of website accessibility
Log In Help Join The Motley Fool
Free Article Join Over 1 Million Premium Members And Get More In-Depth Stock Guidance and Research
By Dan Caplinger - Dec 30, 2014 at 8:30AM

The once down-and-out social-media stock has roared back over the past two years.

It's hard to believe that just two short years ago, social-media giant Facebook (FB 1.29%) was the laughingstock of Wall Street. With shares plunging after its 2012 IPO, Facebook faced the scorn of average investors who had bought in during the stock's short-lived first-day hype and who found their hopes of quick riches thwarted. Yet for those who have taken a longer-term perspective for their investing, Facebook has proven extremely lucrative, with shares tripling since the beginning of 2013. With a market cap of more than $220 billion, Facebook's biggest challenge is whether it can continue to boost its share price at a similar rate in 2015. Let's look more closely at how Facebook enjoyed such a successful 2014 and what's in store for the social-media company next year and beyond. 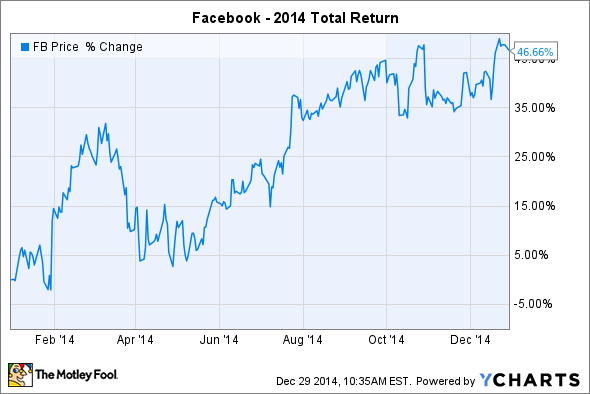 How Facebook stayed on Wall Street's friends list in 2014
The thing that investors want most from Facebook is growth, and the social-media giant delivered growth in spades throughout 2014. In its latest earnings report in October, Facebook saw sales jump nearly 60% from the previous year, and the biggest contributor to that growth has been the company's increasing penetration rates in the mobile market. Facebook now gets about two-thirds of its overall advertising revenue from the mobile platform, showing the immense growth the company has captured from a customer base of more than 1.1 billion mobile-device users worldwide.

Even more impressively, Facebook has not sacrificed its bottom-line profit in the process of grabbing sales. Facebook's adjusted net income soared 73% year over year during its most recent quarter, and much of this success has come from its ability to target advertising as effectively as possible. For example, Facebook has capitalized on users who are willing to see ads in free mobile apps rather than paying for premium ad-free access. By leveraging its high-margin advertising business in as many ways as possible, Facebook has avoided giving up net income in its quest for greater sales.

Facebook's success has been substantial enough to draw high-profile criticism from competitors. Apple (AAPL 2.54%) CEO Tim Cook has attacked Facebook and search giant Google (GOOG 1.66%) for using members' information as a commodity to generate profits, arguing that the iDevice maker does not take advantage of the data users store in their Apple products for monetization purposes. In response, Facebook CEO Mark Zuckerberg defended the company's advertising-based business model, arguing that Facebook has a strong interest in serving ads that its users actually want to see in order to keep them satisfied with the service.

What's ahead for Facebook?
Despite Facebook's success, some investors worry about the future. Facebook believes it will have to spend significantly more money in 2015 in order to take full advantage of its opportunities, warning that overall expenses could jump 55% to 75% next year compared to 2014 levels. That temporarily sent shares falling following the announcement, although investors have since grown more comfortable with the idea that Facebook can bring in enough revenue growth to justify this investment in its business.

In particular, broadening its capabilities to serve advertising customers better promises to be a high-growth strategy for Facebook. For instance, Facebook has looked into video ads as a possible revenue source, with some early marketing deals with major partners showing a great deal of potential. With Facebook receiving so much feedback from its members about what content they want to see, the opportunities to offer customized packages to targeted users are almost limitless.

Perhaps most important, Facebook has learned the value of diversification. Some younger users complain that its namesake website has stopped being cool, and Facebook has noted small but still noticeable declines in usage among teens. Yet as much as many investors questioned acquisitions of services such as Instagram and WhatsApp, Facebook's growing network of websites has helped the company cover all of its demographic bases effectively. As different Internet properties go in and out of favor, Facebook has the capacity to blanket the entire addressable market and build a platform in which anyone can find a natural place.

Facebook sickened its initial investors with an early share-price plunge, but those who remained confident in the company's long-term strategy have seen rich rewards. Facebook can't expect 50% returns each and every year, but the company still has a long path of potential growth ahead. If it can keep executing on its successful strategy, Facebook shareholders could easily see substantial gains in 2015 and beyond.