Please ensure Javascript is enabled for purposes of website accessibility
Log In Help Join The Motley Fool
Free Article Join Over 1 Million Premium Members And Get More In-Depth Stock Guidance and Research
By George Budwell - Dec 30, 2014 at 7:14AM

GlaxoSmithKline has had a rotten 2014, leading to a dramatic downturn in its share price. Can this high-yielding dividend stock rebound in 2015?

British Pharma giant GlaxoSmithKline (GSK -4.01%) has had an awful 2014 by any measure. Over the course of the year, this healthcare stalwart saw payers in the U.S. reject preferred reimbursement status for its next-generation respiratory drugs Anoro and Breo Ellipta, causing sales to fall well below expectations.

Then there was a bribery scandal in China, which concluded with a fine of almost $500 million and sparked allegations of bribery in a host of additional emerging markets, which triggered investigations that are expected to lead to more fines down the road.

Glaxo also threw in the towel on its highly profitable oncology unit, at least for the time being, after its cancer vaccine, MAGE-A3, failed a second pivotal late-stage trial for non-small cell lung cancer. Following this high-profile clinical flop, the company swapped its oncology unit, which had generated roughly $1.5 billion in sales in 2013, for a portion of Novartis' (NVS -0.46%) vaccine unit and about $9 billion in net cash.

Investors have steadily marched out of Glaxo in the face of this avalanche of bad news, resulting in a double-digit decline in share price: 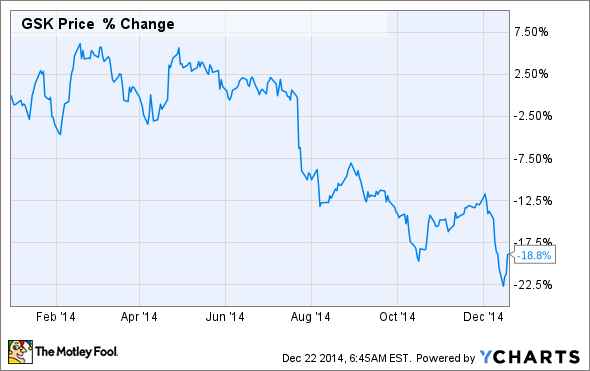 Despite the plummeting share price, though, Glaxo's management has not touched the dividend, and reportedly remains committed to maintaining the payout at $2.45 per share through 2015. As a result, Glaxo currently offers one of the richest payouts in the healthcare sector at a stately 5.72% yield. The average yield in the healthcare sector, by contrast, sits at a mere 2.22%.

Should investors jump on this monster dividend?
Before doing so, investors should understand several issues first first. Chief among them, Glaxo has fundamentally altered its core business structure and focus going forward. According to its third-quarter earnings release, management intends to reorganize the company to reflect its renewed emphasis on vaccines and consumer healthcare.

These two units are thus expected to generate more than 40% of all revenue within the next two to three years. For comparative purposes, vaccines and consumer healthcare presently make up about 35% of total revenue.

As part of this slight pivot away from pharmaceuticals, Glaxo is also exploring a potential IPO for a minority stake in its fast-growing HIV business, ViiV Healthcare, which it co-owns with Pfizer (PFE -0.87%) and Shionogi.

Although an IPO is not expected anytime soon, I think the idea is to have a source of funds on tap in case the company pushes deeper into the realms of vaccines and consumer healthcare, presumably by significantly increasing their research and development budgets (Glaxo's management isn't known for pursuing huge buyouts).

So is Glaxo a buy or not?
The bottom line is this: Glaxo is destined to become a smaller, less profitable company. Oncology products tend to have some of the highest margins and sales growth in the pharmaceutical industry, and you simply can't replace such a high-impact unit with vaccines and consumer healthcare products.

So while management has repeatedly stated that a dividend cut is not on the table, I question whether the company can live up to this promise. The sale of its oncology unit should provide enough cash to perhaps float the dividend next year. But once all of these broad changes are firmly in place, say by 2016, management might have little choice but to reduce the payout.

The alternative, in the face of lower profit margins and cash flows, would be to keep R&D budgets -- the lifeblood of any healthcare company -- static. If I was a shareholder, I would rather management sacrifice the dividend, for the sake of future growth.

All told, this healthcare giant might have further to fall before it hits bottom, due to its dramatic reorganization effort that centers around business areas with slower growth and lower profit margins.