There are few trends larger than big data, the catch-all term for the seemingly endless stream of bits and bytes being generated, collected, and stored across every sector, industry, and business. The growing Internet of Things, including the networking of all things electrical, is creating substantial challenges for companies eager to find new ways to mine increasingly larger data sets to improve and protect their businesses.

That has thousands of companies turning to Splunk (NASDAQ:SPLK) products and services to turn data into real-time insights. As a result, Splunk's sales have grown significantly over the past three years, but top line growth doesn't necessarily make Splunk a great investment. Plenty of growth stocks roar out of the gate only to trip and stumble over competitors and ultimately many fail to deliver bottom-line success. Let's take a closer look and see if Splunk has what it takes to avoid those pitfalls and reward investors.

First, a bit of background
Splunk has been around for about a decade, but its business has really taken off over the past few years as companies have torn down data silos and increasingly become interconnected.

Splunk's products, including Splunk Enterprise and Hunk, help these companies collect, index, and search, explore, monitor and analyze data regardless of format or source. They're specifically tailored to parse data produced by software applications and electronic devices, including data on transactions, customer and user activities, and security threats. As a result, Splunk products aim to provide businesses with an ability to analyze data to find ways to improve service, increase sales, cut costs, and prevent hackers.

Historically, those kind of things were often handled by internal IT departments, but given the explosive growth in data and increasing complexity in managing it, demand for outsourced, automated, solutions has proven to be a boon to Splunk's revenue. Since Splunk's IPO in 2012, the company's trailing 12 month sales have jumped from less than $125 million to more than $400 million exiting the third quarter. 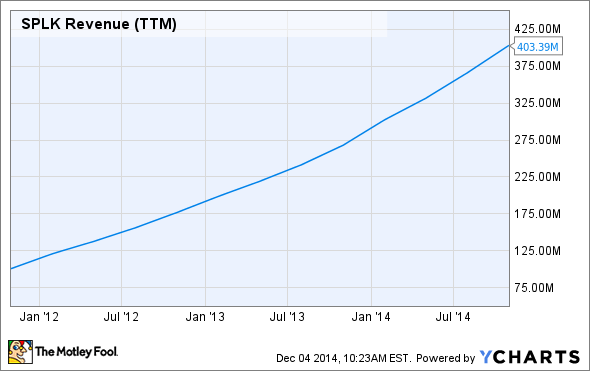 In the third quarter alone, Splunk's sales jumped 48% year over year to $116 million, but as I said previously, sales growth doesn't necessarily translate into investor-friendly profit. In order to fuel additional growth, the company has been spending heavily on product development and on hiring new employees. As a result, the company remains unprofitable on a GAAP-accounting basis and eked out just $0.02 in earnings per share (after adjusting for pesky one-time charges and foreign currency translation).

Financial condition
Since Splunk's investments back into its business means that profit remains lackluster, let's consider how the company stacks up on various financial ratios in a bid to see whether or not it is or isn't likely that those investments will eventually pay off.

First, let's consider the current ratio, which provides insight into whether a company can meet its short-term obligations if debtors come knocking.

The current ratio measures a company's liquidity by taking a company's current assets (cash, cash equivalents, receivables, inventory) and dividing them by the company's short term liabilities (notes payable, current debt payments, payables, accrued expenses, and taxes). The higher the number, the better. Thanks to a cash stockpile of nearly $800 million and no debt, Splunk's 3.5 current ratio suggests that investors shouldn't be too worried about the company making good on its financial responsibilities.

In addition to a solid current ratio, investors should also be encouraged by Splunk's healthy gross-profit margin and free cash flow growth.

While gross margin has fallen from a peak of 90% in 2012, it still remains strong at 86%, which matches up nicely against many of the company's software peers. Meanwhile, Splunk's trailing 12 month free cash flow has jumped from less than $15 million when the company IPO'd, to nearly $75 million exiting the third quarter. Since earnings can often be clouded by accounting gimmickry, and Splunk's earnings are (so far) anemic, free cash flow may be a better metric for insight into the company's financial health. Since free cash is accelerating, investors may want to look beyond current earnings and assume greater profit will come in time. 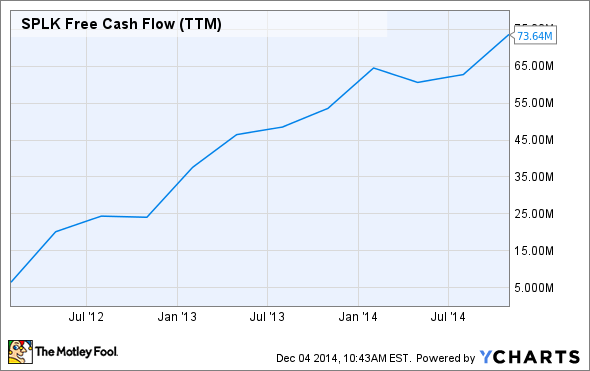 Valuing growth
Valuing growth stocks like Splunk that are investing heavily in the future is a bit tricky. One-time expenses can sink operating results in the short term, but may provide profit tailwinds later on.

As a result, investors need to approach companies like Splunk differently than they do established blue chip stocks.

Regardless, Splunk shares aren't cheap by traditional measures. Based on analyst's estimates that Splunk will notch EPS of $0.11 next year, the company is trading at an eye-popping 560 times forward earnings estimates. Even with Splunk's rapid sales growth, the company is rich in terms of price to sales, too. It's price-to-sales ratio of 19 is far from levels that would entice bargain hunters.

Since Splunk doesn't pass muster on valuation, its likely most attractive to growth investors, who are typically more intrigued by future growth opportunities, rather than low multiples. After all, some of the most impressive shareholder returns over the past decade haven't been tied to valuation, but from the ability of growth companies to disrupt their industry.

Right, for some
Value investors will likely want to steer clear Splunk, but growth investors may want to think long term. Data is growing exponentially, so the need for data-driven business intelligence isn't likely to fall. That may suggest that the investments Splunk is making today, may eventually translate into investor friendly profit. If so, then Splunk could prove to be a good fit for investors willing to accept a bit of risk in portfolios.