Please ensure Javascript is enabled for purposes of website accessibility
Log In Help Join The Motley Fool
Free Article Join Over 1 Million Premium Members And Get More In-Depth Stock Guidance and Research
By Dan Caplinger – Dec 30, 2014 at 10:22AM

Many factors helped boost the old-school tech stock, but this man proved to be more important than all the others.

The pace of innovation in the technology sector has always been breathtaking, and with moves toward cloud computing, the Internet of Things, and other key initiatives, it's been challenging for the older and larger players in tech to find their way in the rapidly changing space.

But after years of miscues and stagnant stock prices, Microsoft (MSFT 3.37%) broke out of its doldrums last year, and it took the opportunity in 2014 to build on that momentum with gains of more than 27%. Despite enjoying several positive tailwinds that helped push the stock higher, Microsoft's success in 2014 boils down to one simple thing: the successful entry of new CEO, Satya Nadella, and his ability to reenergize the tech giant.

Let's look more closely at Microsoft's 2014 and whether the company can make 2015 an even more successful year. 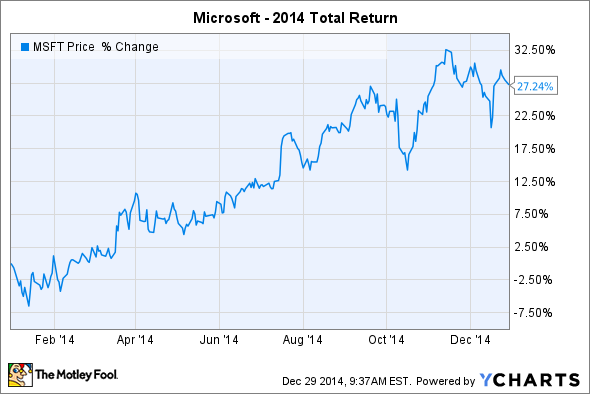 How Microsoft made the most of a strong 2014
Clearly, Nadella wasn't the only factor that helped Microsoft score strong gains for the year. One surprising boost came from Microsoft's decision to end its technical support for the aging Windows XP operating system, which was a favorite among businesses who weren't in any hurry to upgrade to newer systems. Microsoft's decision spurred a rash of replacement PC buying among consumers and corporate clients, and that was substantial enough to turn semiconductor giant Intel's flagging PC-chip sales around and boost Microsoft's PC-related sales in the process.

Moreover, Microsoft has followed through on initiatives that were set in motion long before Nadella took the reins as CEO. The software giant has done an excellent job in getting users who formerly bought permanent licenses to shift to its cloud-based Office 365 system, which operates on a subscription basis and therefore guarantees recurring revenue for Microsoft going forward. Without the need to coax customers into making upgrades that often require major commitments of time and effort, Microsoft instead simply delivers its improvements on a regular basis and can focus on keeping long-term customers satisfied. Similarly, Microsoft's cloud services have taken off as it competes against other giants in the industry.

How Nadella pushed Microsoft forward
Yet the impact Nadella has had on Microsoft is undeniable. Even though he has continued some of the strategic moves that former CEO Steve Ballmer advocated, Nadella put his own spin on them, getting investors excited about Microsoft's future. For instance, incorporating Nokia's handset business into Microsoft's corporate structure, Nadella has focused not on trying to establish dominance in the hardware-device market but rather on using Microsoft's strength in software to make a splash in the applications market. Nadella's willingness to give customers access to Microsoft products regardless of the hardware platform they use has opened new doors to the company that didn't exist when Microsoft was simply trying to build its own closed ecosystem to answer challenges from its rivals.

Moreover, Nadella has given investors hope that Microsoft can keep reaping profits from its most important legacy software. Despite negative responses to the Windows 8 operating system, Nadella remains convinced that the coming Windows 10 release can reverse bad sentiment and give users an experience that can even top Apple's iOS. Even though Windows 10's release is likely almost a year away, Nadella's enthusiasm is contagious, and it shows how he's likely to move forward in other areas of the business.

Even Nadella has had to deal with some tough decisions. In July, Microsoft laid off 18,000 permanent workers, with most of them coming from the legacy workforce it inherited from its Nokia acquisition. That decision will cost Microsoft $1.1 billion to $1.6 billion in severance and benefit-related charges to earnings. But by doing so, Nadella emphasized the importance of sticking with his broad-based strategy, even when it means short-term financial pain and reductions in personnel.

To be clear, Microsoft still faces plenty of hurdles ahead, with competitors working hard to fight back against its recent resurgence. Yet with Nadella at the helm, Microsoft has a greater chance of evolving into a next-generation tech company and avoiding the danger of becoming increasingly irrelevant in the fast-moving industry going forward.