Ford's new ads talk up the 2015 F-150's durability and features, but neglect to mention the elephant in the living room.

If not, you're about to: The Blue Oval said on Tuesday that it's unleashing "its most comprehensive truck marketing campaign ever" in support of its all-new pickup.

The campaign begins with three new TV commercials that will debut on Wednesday during the NCAA Division I college football playoff games.

Those commercials talk up the new truck's capabilities and features, as you'd expect. But what's interesting is what they don't emphasize: fuel economy.

What Ford isn't telling you in its new truck ads

Unless you've been living under a rock since January, you've surely heard that the new Ford pickups have aluminum body panels -- or as Ford says in its new ads, "a high-strength military-grade aluminum alloy body."

The thinking behind Ford's move to aluminum has been obvious from the start. It certainly wasn't about cost: Aluminum is considerably more expensive than steel, and building aluminum-bodied trucks requires different techniques and tooling, meaning Ford has had to extensively (and expensively) overhaul its two truck factories to make the new F-150. And it wasn't really about towing capacity.

It was all about fuel economy.

The U.S. Corporate Average Fuel Economy rules are set to get a lot tighter over the next few years. To meet the upcoming new standards, Ford knew it would have to squeeze more miles per gallon out of its best-selling and most profitable product -- without sacrificing any of the capabilities or "toughness" that has made it America's best-seller for decades.

All other things being equal, a lighter vehicle gets better fuel economy. Ford executives gambled that they could build a tough-enough truck with aluminum -- and sell it to skeptical buyers -- while getting the fuel-economy gains they would need to meet those tough new rules.

It worked: The new F-150s do in fact get significantly better fuel economy than the outgoing models, thanks to their reduced weight and Ford's advanced turbocharged "EcoBoost" engines.

But you won't hear any of that in the new TV ads. 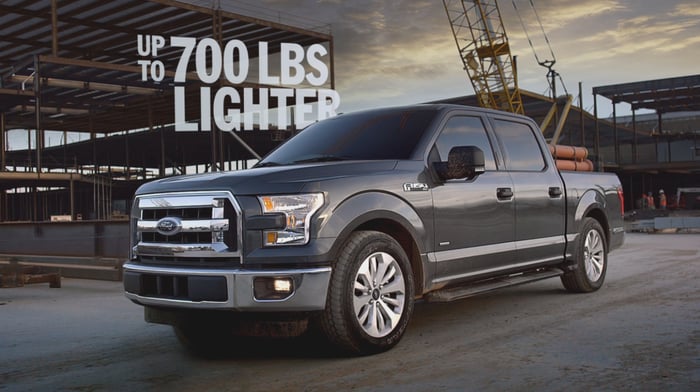 The first TV ads for Ford's all-new F-150 play up the new trucks' reduced weight -- but not for the reason you'd expect. Source: Ford Motor Company.

The ads also tout several of the truck's new optional features -- LED spotlights in the side mirrors, a 360-degree camera, remote-control tailgate release, and so forth. That's no surprise. In fact, the ads themselves aren't surprising at all if you've seen other recent Ford truck commercials.

The only surprise is the extent to which Ford has (so far, at least) completely ignored fuel economy in making the case for its new truck. But given the recent steep drop in oil prices, it's not all that surprising that Ford has decided to tout the new truck's durability and capabilities before rolling out the fuel-economy argument.

The upshot: Cheap gas probably won't spoil Ford's party
Ford's decision to build an aluminum-bodied F-150 was a "bold move," to steal an old Ford ad tag line. And while it'll be months before we know for sure, so far it looks like a great bet: The first new F-150s to reach dealers have been selling very quickly, and Ford reports that interest in the truck is sky-high.

Ford knew all along that it would have to make a case for its truck that went well past fuel economy -- all the more so now, given the recent steep fall in oil prices. These first TV ads seem to do a good job of making that case in a way that will resonate with buyers.

Will strong sales follow? It looks likely, but we'll find out over the next few months.