Please ensure Javascript is enabled for purposes of website accessibility
Free Article Join Over 1 Million Premium Members And Get More In-Depth Stock Guidance and Research
By Daniel B. Kline - Dec 30, 2014 at 6:15PM

This year saw some clear winners and losers during the busy Christmas shopping season.

For technology companies, the holiday season represents more than just a huge sales opportunity. This "most wonderful time of the year" provides them an opportunity to solidify market share, reboot a struggling product line, or see where they stand among peers.

This year, the holiday shopping rush helped one sales leader fortify its No. 1 position while showcasing a surprising contender and exposing a number of weaker companies as well. It also showed a change in the buying patterns of consumers, which may impact what devices are made going forward.

Apple was the leader
If you had any doubts of whether Apple ( AAPL -1.17% ) still holds a dominant position in phones and tablets, the company's holiday sales total should put them to rest. The company accounted for 51% of all new device activations worldwide between December 19 and 25, according to Flurry, a data analysis service owned by Yahoo!.

Samsung (NASDAQOTH: SSNLF) was a distant second with 18% of new activations.

"To put this in perspective, for every Samsung devices that was activated, Apple activated 2.9 devices," according to Flurry's report. "While the holidays in general and Christmas in particular are not the sole indicator of the smartphone market share and trends, it is safe to say that Apple's newly released iPhone 6 and iPhone 6 Plus have had a blockbuster holiday season, despite a lackluster holiday season for the consumer electronics industry."

Flurry, which said that Christmas Day is the biggest of the year for new device activations, compiles its data by tracking more than 600,000 apps.

Microsoft can claim victory, too
In some ways, Microsoft ( MSFT -1.97% ) won the holidays just by managing to have its devices -- mostly phones marketed under the Nokia brand -- break out at all. The company had 5.8% of new activations, which falls well behind Microsoft and Samsung but makes it the clear No. 3.

From all other manufacturers, only Sony (1.6%) and LG (1.4%) had more than a 1% share. That's good news for Microsoft, which has struggled to establish Windows Phone as an iOS and Android alternative. It also suggests the company is making some headway in its efforts to market mid and low-priced smartphones as an alternative to high-end devices.

Tablets are becoming phablets?
While the overall market share for tablets -- if you count large ones, small ones, and phablets -- has remained about the same since 2012, phablets are cannibalizing their larger cousins. In 2012, tablets accounted for 36% of new device activations -- with about 92% of that segment coming from large and small tablet activations. In 2013, that started to shift, with tablets overall delivering 33% of total activations but 88% came from large and small devices.

Most recently in 2014, consumers showed a real desire for phablets as overall tablet activations bounced back up to 35% of all devices, but large and small tablets now comprise just 63% of that segment. A big part of that trend is likely the iPhone 6 Plus, which Flurry said was a top five most-activated device, as well as Samsung's Galaxy Note line.

"The phablet's popularity seems to come at the expense of full-sized tablets and to a lesser extent small tablets, Flurry wrote. "Even so, the medium-sized phone is still favored by most consumers and saw the largest share of device activations this Christmas." 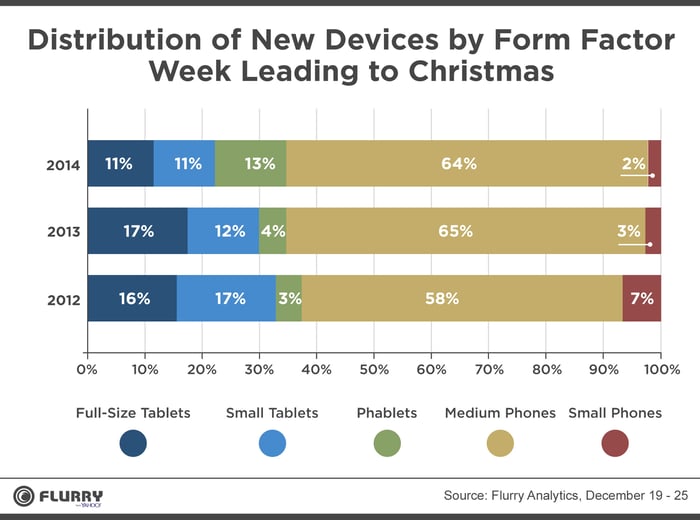 Trends are becoming clear
Whether Microsoft, Sony, or LG can improve their prospects is yet to be seen, but the other industry players like Xiaomi, Huawei, and HTC have a lot of catching up to do. It's also clear that consumers are looking for larger screens on their phones -- probably to avoid carrying a separate tablet.

This was a holiday season where the rich -- Apple and Samsung -- got richer and only one other company, Microsoft, has anything to celebrate. The major question for next year is whether the Windows-maker can grow beyond a niche audience to become a true alternative, and if that happens, who the market share will come from.

Apple, on the other hand, has received full justification for its decision to enter the phablet market with the iPhone 6 Plus and continued validation for the iPad mini. Those devices may have poached iPad sales, but if they did not exist, it seems likely Apple would have lost market share as consumers flocked to competitors for their holiday shopping.