When making an analysis of an industrial conglomerate such as 3M Company (NYSE:MMM), many investors settle on comparing segmental operating margins. However, a deeper analysis would also involve looking at segmental return on assets, or ROA -- defined here as segmental income divided by assets. This is a useful measure that helps investors to understand how the company makes best use of its assets and where it should invest for growth. Let's see how this applies to 3M.

The company reports out of five operating segments. I have broken out segmental operating income for 2013 so readers can gauge the relative importance of each unit. The industrial segment -- contributing around a third of overall income -- is the most important, with healthcare contributing more than 23% and the other three segments all less than 20%. 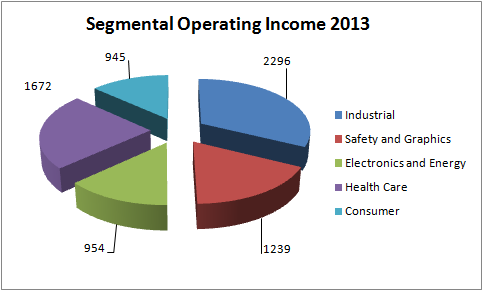 As shown below, healthcare is the standout performer when it comes to operating margin. This might surprise many investors, as 3M is best known as an industrial company. 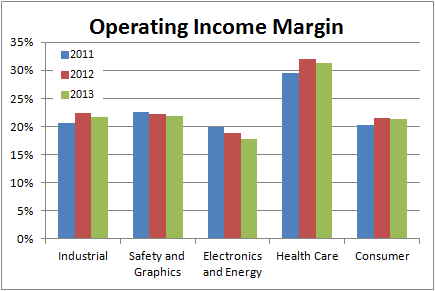 On an operating income basis, it appears the company should be investing in the healthcare sector. However, as indicated earlier, ROA is a more helpful measure, because it demonstrates the most productive areas in which the company might buy or build assets.

Segmental return on assets
3M generates very high ROA from its healthcare and consumer products segments. However, when compared to General Electric, another large-cap industrial company, it's clear 3M tends to generate relatively high ROA across all its segments. 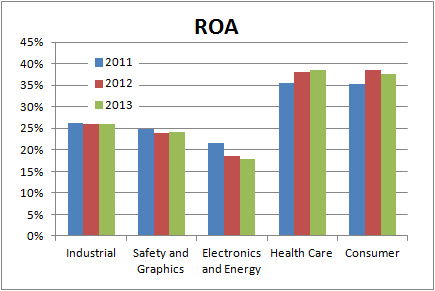 The big surprise here is probably that consumer ROA is so high. With that said, what are the key takeaways from this analysis for 3M investors?

4 key conclusions
First, the good news is that 3M's fastest-growing segment, healthcare, also has the highest ROA. At the 3M outlook meeting in December, management affirmed its targets for revenue growth through 2017. Healthcare is forecast to grow revenue the most, at 4%-7%, slightly ahead of overall revenue growth of 4%-6%. Incidentally, consumer products growth is predicted to grow at 3%-6% from 2013-2017.

Second, the company has an opportunity to grow internationally in both its healthcare and consumer units, particularly within developing markets. Expanding in developing markets is a key aim for 3M; indeed, management forecasts the revenue mix between developed and developing will be 60%/40% in 2017, compared to the 65%/35% split in 2013. From 3M's recent presentation, the U.S. alone contributed 44% of healthcare revenue (Europe, Middle East, and Africa contributing 30%) in 2014. Meanwhile, the U.S. contributed 56% of consumer revenue . In other words, both of the high-ROA segments have the potential to increase their developing-markets exposure.

Third, one reason 3M commands such high segmental margins and ROA is that its products tend to have a strong brand identity. As CEO Inge Thulin said at the outlook meeting in December, "[W]e have made a step change relative to investment in research and development because we are a company that would not like to be commoditized."

Management expects research and development spending as a percentage of sales to increase to 6% in 2015, compared to an estimated 5.6% in 2014.

Fourth, the high ROA in its consumer and healthcare segments strengthens the case for 3M being a relatively diversified industrial stock.

All told, 3M has some surprisingly high-ROA businesses, and investors should look out for future investment in its healthcare and consumer businesses, particularly as its sales grow in developing markets.