Please ensure Javascript is enabled for purposes of website accessibility
Log In Help Join The Motley Fool
Free Article Join Over 1 Million Premium Members And Get More In-Depth Stock Guidance and Research
By Sean Williams - Dec 31, 2014 at 10:03AM

With its shares up 500% over the past two years, is Inovio poised for more upside or a 50% haircut? 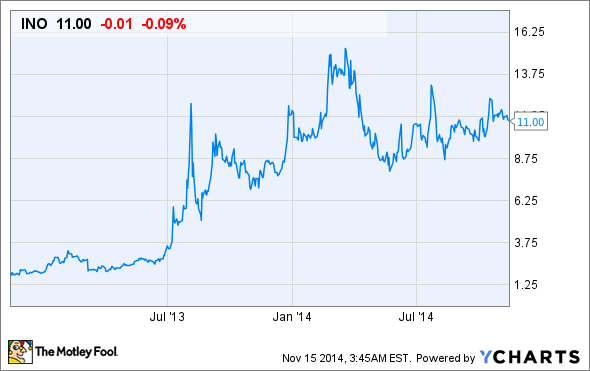 There are few biopharmaceutical companies that have delivered a more robust return over the past two years than Inovio Pharmaceuticals (INO 6.91%). Over the trailing two-year period, its shares have rallied about 500% on the excitement surrounding immunotherapy vaccines in general, as well as its well-rounded pipeline and key partnership with Roche.

Shares of Inovio are down around 19% since the year began, largely as investors digest last year's monstrous gains, react to November adjustments to the Roche deal, and adjust to the idea that losses are likely to continue for the immediate future.

Today, we'll dissect the good and the bad surrounding Inovio and try to establish what outcome is more likely: Inovio rising to $15 per share, or retracing back to $5.

Inovio hits the mark
There are three particular reasons why Inovio investors can be excited right now.

First, the scope of Inovio's research is cutting-edge and geared toward cancer immunotherapies and viruses. Its cancer products are specifically designed to work in conjunction with a patient's immune system to help better recognize and kill cancer cells. Not to mention, Inovio is working on a number of hot-button vaccines, including Ebola, hepatitis B, and HIV. Secondly, and building on the first point, Inovio has an impressively deep pipeline for a company its size. Currently, the company is undertaking 11 different clinical and preclinical studies, of which six are geared toward oncology, and the remaining five are infectious disease oriented. Even better, only five of its 11 programs are internally funded. This means that Inovio will potentially burn through less of its cash on hand, allowing it to continue researching additional compounds.

Third, Inovio's most advanced internal program, VGX-3100, a vaccine designed to treat cervical dysplasia associated with human papillomavirus types 16 or 18, excelled in a midstage study by meeting both its primary and secondary endpoints. VGX-3100 led to a statistically significant regression of cervical intraepithelial neoplasia, or CIN, 2/3 in patients to a CIN 1 or no disease 49.5% of the time compared to just 30.6% for the placebo. Furthermore, HPV clearance combined with regression from CIN 2/3 to CIN 1 or no disease occurred in 40.2% of VGX-3100 treated patients compared to just 14.3% of placebo patients. In sum, this study could demonstrate that Inovio's platform has merit.

Inovio has concerns, too
Of course, if Inovio didn't have any concerns then the stock wouldn't have stalled out this year. The way I view it, there are three reasons why some folks could be skeptical about Inovio.

To begin with, while the entire concept of cancer immunotherapies is promising, it's also highly unproven. Small-cap cancer companies have a historically poor track record of succeeding in phase 3 studies and/or getting the Food and Drug Administration to approve their cancer drug. Therefore, assuming one midstage study means Inovio's entire drug development platform has merit might be jumping the gun a bit.

We also can't discount the fact that Inovio's still a long way off from being profitable. Don't get me wrong, development milestones and contracts with global governments could net Inovio a quarter or two of profitability here and there; however, the company's losses currently put it on pace to be out of money by the beginning of 2018, give or take a few months. It's going to be difficult to push an unproven stock higher when it's about three years away from depleting its existing cash on hand.

That leads me to the final bearish point: Inovio loves to raise cash by selling its own stock. Though this does indeed help pay the bills, Inovio's outstanding share count has more than tripled in just the past five years, which has a negative effect on diluting existing shareholders. It's possible Inovio may continue to turn to share offerings as a way to buoy its coffers on any major rally in its stock.

Where will Inovio head next: $5 or $15?
Now that we've taken a closer look at both sides of the aisle, let's return to our original question: Is Inovio headed for $5 or $15 next?

Personally, I'm not sold on Inovio's platform just yet in spite of the midstage success of VGX-3100. However, having three full years of cash runway in its coffers, a collaboration with Roche that still stands despite recent modifications, and 11 possible indications in its pipeline, I'd say its chances of hitting $15 far exceed the potential for a retracement back to $5.

Investors will want to pay close attention to VGX-3100 as it moves into later-stage studies since it remains Inovio's most-advanced internal compound, and should devote extra attention to INO-5150 and INO-1800 as both could represent a key cash-generating component for Inovio later this decade. Still, investors would be wise to temper their expectations since Inovio does have a history of selling its stock into any major strength, and it is projected to lose money on an annual basis for years to come.