Please ensure Javascript is enabled for purposes of website accessibility
Log In Help Join The Motley Fool
Free Article Join Over 1 Million Premium Members And Get More In-Depth Stock Guidance and Research
By Matthew Frankel, CFP® – Dec 31, 2014 at 7:00AM

Some homebuilders and home improvement retailers performed very well in 2014. Should we expect a repeat? 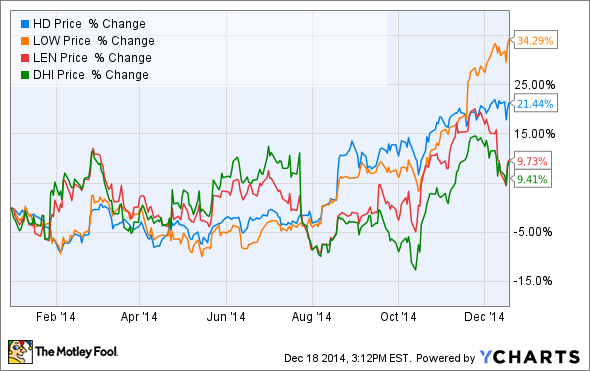 So let's take a look at why these four companies performed so well this year.

Lennar is in a similar situation, with new orders up by 23% and its backlog expanding 22%. The company is also branching out to new areas of the business, with the newly created Lennar Multifamily division completing the sale of its first two apartment properties this year.

As for Home Depot and Lowe's, a strong housing market and the improving U.S. economy have helped to boost sales significantly. Not only are people buying more new homes (29% more than five years ago), but they have more disposable income to make improvements and buy appliances and furnishings for their homes. In fact, over the past five years, per-capita disposable income has risen by nearly 15% in the U.S., with 3.5% growth in the past year alone.

The companies are also running more efficiently than they have in the past. Both companies are seeing strong same-store sales growth, and are growing some new and exciting areas of the business. For example, Lowes' recently launched ProServices program, which is targeted at contractors and other business customers, has been one of the strongest growth drivers in the company over the past three years. And, Home Depot has said it is experiencing increased spending on remodeling and renovation projects.

Home Depot expects to report 2014 sales growth of 4.8%, but it also expects 21% year-over-year earnings growth, including all of the costs related to the infamous data breach.And, Lowe's is also expecting to report sales growth in the 4% to 5% range, along with higher operating margins. This should produce earnings growth of about 24%, according to the consensus of analysts covering the company.

Will the strong performance continue in 2015?
All four companies seem to be optimistic that they will continue to outperform. Lowe's CEO Robert Niblock recently said, "We are at a great point in our company's evolution." He emphasized that Lowe's is planning to explore some potential high-growth markets in the near future, such underserved urban locations like Manhattan, where Lowe's is planning to open two new stores in 2015.

The company also intends to increase the global penetration of its brand by furthering its expansion into Canada and Australia. Thanks to ventures like these, Niblock expects return on invested capital to reach 19% by 2017 -- a 500-basis-point increase.

Meanwhile, Home Depot has done a great job of integrating its online business with its physical stores, and it will continue to do so in 2015. In fact, about 40% of the company's online orders in 2014 have been picked up in-store. Home Depot is seeing so much success in this area that it's adding dedicated storage bays in 550 stores solely for this purpose, according to CEO Craig Menear.

Stuart Miller, Lennar's CEO, said the company's $5 billion pipeline of multifamily housing will be a big contributor to the company's bottom line during the next couple of years. And D.R. Horton said its enormous backlog of business is giving the company a great start to 2015. The continued U.S. housing recovery alone should produce solid growth in both of these companies, and new home construction is expected to be one of the largest growth areas of 2015. In fact, Freddie Mac economists are predicting that homebuilding will increase by 20% in 2015.

So long as the U.S. economy continues to grow and the housing market remains healthy, these four companies should have another excellent year in 2015. And that's exactly what many real estate experts are predicting.

Matthew Frankel has no position in any stocks mentioned. The Motley Fool recommends Home Depot. Try any of our Foolish newsletter services free for 30 days. We Fools may not all hold the same opinions, but we all believe that considering a diverse range of insights makes us better investors. The Motley Fool has a disclosure policy.