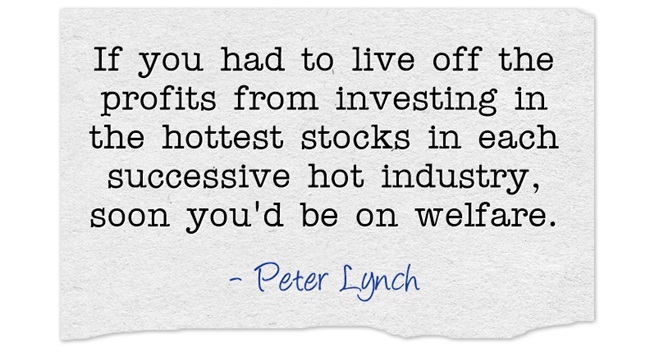 Source: One Up On Wall Street. Made with Quozio.com.

Legendary investor Peter Lynch wrote this in 1989, and gave the example that when he was growing up, carpeting was one of the hottest things to invest in. At the time, average carpet prices dropped from $28 per yard to $4 per yard, thanks to a new tufting process that drastically reduced the amount of fiber that went into a carpet and technological advances in automated looming -- the process of weaving threads together. According to Lynch, the emergence of lower prices sparked a boom in carpet sales, and the six major carpet producers, which initially grew like gangbusters and earned more money than they knew how to spend, were eventually joined by 200 new competitors that lowered their prices to win over customers. From that point forward, "nobody made another dime in the carpet business," as Lynch put it.

Being a 3D printing specialist, I'm beginning to wonder if the 3D printing industry could share a similar fate to what the carpet industry experienced in terms of industry profits -- a necessary component for sustainable long-term investing.

Attractive industry growth rates? Check!
According to Wohlers Report 2014, a comprehensive report on the state of the 3D printing industry in 2013, the industry is expected to grow by over 31% per year between 2013 and 2020, to eventually generate more than $21 billion in worldwide revenue. This forecast represents a 130% increase from Wohlers Report 2013, which called for the 3D printing industry to only generate approximately $9.1 billion in 2020. Wohlers has been tracking the industry for over 20 years, meaning the industry tends to put a lot of weight behind any updates to growth forecasts the company makes. 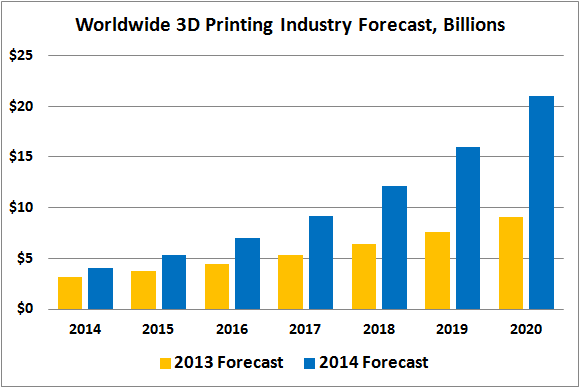 Increasing competition? Check!
Although they're not exhaustive, Wohlers has compiled lists of major 3D printing manufacturers, service providers, and 3D software developers, which together give the sense that the 3D printing industry is already crowded with established players. Throw in the prospect of Hewlett-Packard (NYSE:HPQ) and the likelihood of countless other lower-profile companies entering the space in the coming years, and it seems probable that competitive pressures could begin to weigh on average selling prices across the industry in the coming years. Echoing this sentiment, research company IDC expects that 3D printing average selling prices will decline through 2017. The upshot is that IDC also predicts that declining prices will drive higher adoption rates, meaning 3D printing companies could have an opportunity to grow their installed bases. As most 3D printing companies utilize a razor-and-blade business model, whereby the printers are the razors and the consumables are the blades, a growing installed base could help them drive larger streams of long-term recurring revenue. Historically, 3D printing consumables have carried a higher gross profit margin than the actual printers, which could help offset potential profitability headwinds as a result of declining printer average selling prices. Patent risk? Check!
In recent years, a variety of patents related to stereolithography, selective laser sintering, and fused deposition modeling 3D printing processes have expired. In every instance, it invited new competition that democratized access to 3D printing technologies previously reserved for the higher end of the market.

And who can forget the birth of the 3D printing maker movement, when patents around Stratasys' (NASDAQ:SSYS) fused deposition modeling expired?

In the coming year, additional stereolithography and SLS patents will expire, and although it remains unclear exactly how this will affect the 3D printing industry at large, it seems likely to further democratize access to previously patent-protected 3D printing technologies.

The threat of disruption? Check!
Compared to traditional manufacturing, 3D printing as a manufacturing process is inferior in terms of speed, surface quality, and the number of applications it can target. Arguably, these shortcomings make the industry ripe for disruption, and the prospect of a breakthrough 3D printing technology rendering existing technologies inferior likely remains high.

Aware of 3D printing's shortcomings, HP has plans to enter the space in 2016 with a homegrown technology it's calling Multi Jet Fusion, which it claims is up to 10 times faster than current material extrusion and SLS technologies. Perhaps more important than the implications of HP entering the space and the impact it may have is the reality that there's nothing to stop an innovative 3D printing technology from an external source hitting the market and making other 3D printing companies' technologies appear inferior. Of course, these companies' R&D budgets are aimed at preventing disruption to some degree by developing new technologies and patents, but it isn't a foolproof business strategy.

Unfortunately, it's unclear if there will eventually be too much competition in the 3D printing industry for entrenched companies to make sufficient profits over the long term. However, given the industry's strong growth trajectory, likelihood of increasing competition, key patents expiring, and threat of technological disruption, investors shouldn't rule out the possibility that profits may be difficult to come by for 3D printing companies in the long run.

After all, robust industry growth has yet to show up on the bottom line -- in the form of profits -- for many publicly traded companies in the space. As a result, 3D printing investors are being promised earnings growth in the future, but let's be clear: Delivering on a promise isn't guaranteed here. In the end, no one knows how this will all play out, and maybe not every area or 3D printing company will be affected by this potential industrywide risk.

Investors seeking to gain exposure to the industry and lower the risks outlined in this article could explore focusing on technology-agnostic businesses, like pure-play 3D printing service providers that simply adopt leading technologies rather than manufacture them. This approach could help lower the risks facing more traditional companies, because service providers can simply adapt to changes in the landscape more easily by introducing 3D printing-related services around new technologies.