Plunging crude oil prices in 2014 put $14 billion back into the pockets of American drivers instead of OPEC wallets.

My, how the tables have turned. For years, OPEC nations have manipulated the price of oil by setting production quotas. However, surging U.S. oil production from fracking has flooded the market with oil, driving down imports of oil from OPEC. We can see the dramatic shift in the chart below. 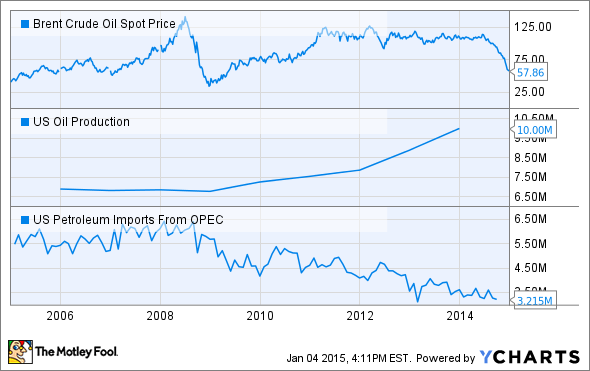 This shift has tipped the balance of power in the market, which led OPEC to declare a price war on American oil companies. That price war has trickled down to what we pay for gas: In 2014, American drivers saved a total of $14 billion at the pump, or $43.75 for every man, woman, and child in the country, according to AAA. Those savings could skyrocket this year if current oil prices persist.

Fracking finally broke the camel's back
High oil prices over the years have transferred vast sums of wealth from places like the U.S. to OPEC nations. For example, Saudi Arabia's foreign currency reserves topped off at $736 billion in cash as the kingdom has enjoyed budget surpluses since 2009. Other OPEC nations have also built up multibillion-dollar reserves on the back of budget surpluses; Algeria, for example, has more than $200 billion in the bank.

Those budget surpluses are now long gone; Saudi Arabia alone was expected to spend $14 billion more than it collected in 2014, and plunging oil prices are expected to blow a $38.6 billion hole in the kingdom's 2015 budget. Likewise, Algeria is expected to use its cash reserves to cover an expected budget deficit this year, and to freeze wages in an effort to keep costs in check. The North African nation's oil minister recently said that "OPEC has to intervene to correct the imbalance and cut production to bring up prices and defend the income of member states."

OPEC's pain is America's gain
OPEC has so far been willing to play a dangerous game of chicken with U.S. oil companies by refusing to curb production levels. So far, OPEC's results are mixed. Oil stocks have been pummeled over the past six months. U.S. oil companies have slashed spending, which will slow oil production growth next year and halt job growth in the industry. However, many shale plays remain profitable at oil prices below $40 per barrel, so American oil companies aren't close to halting drilling.

Meanwhile, the drop in oil prices is largely credited with boosting U.S. consumer confidence, which resulted in a big jump in retail sales this past November. And the U.S. economy enjoyed its strongest third quarter of growth in more than a decade. That could just be the start, as American drivers could save between $50 billion and $75 billion on gas prices this year, or up to $234 per person according to AAA. Those savings could be plowed back into the U.S. economy, further boosting retail sales, instead of fueling the economies of OPEC nations.

Final thoughts
Fracking, despite its flaws, has had a major positive impact on the United States. The technology unlocked vast supplies of oil trapped in tight rock formation underneath the ground, enabling the U.S. to finally break the grip OPEC had on our wallets. The $14 billion in savings last year is only expected to increase in the years ahead as more of our hard-earned money stays in America to fuel our economy.