After posting a big loss in the first half of 2014, SkyWest, Inc. is on the road to a comeback.

Top regional airline SkyWest, (SKYW -2.77%) had a tough 2014. The company has been struggling with some below-market contracts it inherited from its 2010 acquisition of ExpressJet (another regional airline). New pilot training and rest rules created an additional burden in 2014. Unusually severe weather last winter created even more headaches. 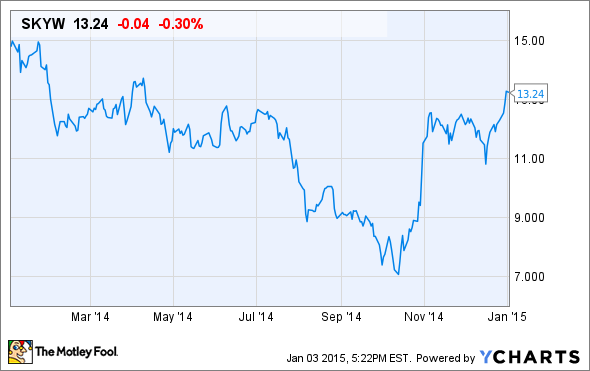 However, SkyWest has started to restructure its business to bolster its profitability. It is retiring smaller, inefficient aircraft and competing successfully for contracts to fly larger regional jets, which tend to offer high margins. This process should return SkyWest to profitability in 2015, and permit significant margin growth over the next few years.

Slimming down to boost earnings

As of the end of September, SkyWest had 751 aircraft in its fleet. This included 217 larger regional jets with 65-76 seats each; 491 smaller regional jets, most of which have 50 seats; and 43 turboprops with 30 seats each.

The larger regional jets are quite profitable, whereas SkyWest's smaller planes have become uneconomical to fly, for the most part. Big airlines like United Continental (SkyWest's top customer) prefer larger regional jets because they are more fuel-efficient, have lower non-fuel unit costs, and can be configured with first class sections in order to generate more revenue.

SkyWest will remove dozens of small regional jets from its fleet this year. Photo: The Motley Fool

Accordingly, SkyWest is working to reduce its turboprop and small regional jet operations as quickly as possible. As of late October, SkyWest planned to reduce its fleet count to 715 by the end of the year by permanently retiring several dozen of its smaller regional aircraft.

In November, SkyWest announced some other big moves to slim down. First, it decided to retire all of its remaining 30-seat turboprops by June, 2015. Second, it moved up the end date for ExpressJet's money-losing contract with United (covering more than 200 50-seat jets) from November 2020 to December 2017.

Focusing on the most profitable part of the business

Slimming down in this way will directly improve earnings at SkyWest, because the company is mainly dropping flights that are losing money today. However, it will also free up resources -- primarily pilot labor -- for SkyWest to expand its 76-seat jet operations, which remain highly profitable.

In May 2013, SkyWest signed a contract to fly 40 76-seat Embraer E-175 jets for United. About half of these planes entered its fleet during 2014, and SkyWest is scheduled to take delivery of the last 19 between now and August.

The new United and Alaska E-175 contracts will increase SkyWest's large regional jet operations by nearly 25% compared to the beginning of 2014. SkyWest is likely to get other opportunities to add large regional jets in the next few years, and is in active discussions with all of the legacy carriers today.

Meanwhile, SkyWest will radically shrink its fleet of small aircraft with 50 or fewer seats between now and the end of 2017. These operations are collectively losing money, so shrinking this part of the business will improve earnings.

By 2018, SkyWest is likely to be a much smaller, but much more profitable airline. This makes it a turnaround story worth keeping an eye on. With a more productive asset base, SkyWest should be able to close the big gap between its book value of roughly $1.4 billion and its market cap of less than $700 million, leading to solid gains for patient investors.