After enjoying banner years in 2013 and 2014, investors need to prepare for market volatility. While investors can't predict economic or market declines, they should examine how well their top holdings could fare in tough times.

Today, let's look at Wal-Mart (NYSE:WMT), a widely held stock that has disappointed investors recently. It may actually make sense in a conservative portfolio.

2014: A year of transition
Last year was tough on Wal-Mart investors. The stock underperformed the S&P by nearly 4%. The primary culprit was weak top-line sales, which were due to lagging foot traffic at U.S.-based Supercenters. There are, however, reasons to believe that brighter days may be ahead.

Wal-Mart CEO Doug McMillon has been very proactive in meeting the threat of e-commerce and smaller square-footage stores. While online sales still only make up less than 1% of Wal-Mart's sales, online sales grew 30% in 2013. Wal-Mart ranked fourth among all retailers in global e-commerce sales, according to trade publication Internet Retailer's 2014 list. (Amazon.com was No. 1 on that list.)

Thanks to a broad e-commerce strategy that allows customers to pick up items in the store or have them shipped to their homes, Wal-Mart recently had its busiest online sales day ever this past Cyber Monday, and its online sales were projected to grow 25% for 2014.

A potentially larger threat to Wal-Mart is the convenience market, which is dominated by smaller-format stores, including dollar stores, that allow customers to get in and out much faster than a typical Wal-Mart Supercenter (each about 182,000 square feet). That's why Wal-Mart has been pushing its smaller square-footage concepts.

With a new "to-go" convenience store concept and a drive-thru grocery concept in the works, Wal-Mart's strategy is clear: It wants to sell its products in any format its customers prefer.

While that's not a guarantee for success, it's a good place to start. Wal-Mart recently snapped a dreadful streak of six consecutive quarters with flat or negative same-store sales. For the most recent quarter, EPS rose 2%, and U.S. net sales rose 3.4%. While same-store sales were up only 0.5%, Neighborhood Market saw a 5.5% gain in same-store sales, and e-commerce sales rose 21%.

The results may not sparkle, but Wal-Mart is showing that it can adapt, and it should survive in any market.

Wal-Mart would survive a market crash
If the stock market crashed for any prolonged period of time, one would assume that the U.S. economy would be slumping, and consumers would turn to lower-priced goods. Believe it or not, Wal-Mart still often has the lowest prices.

A recent report by Wells Fargo Securities LLC, noted here by fellow Fool Travis Hoium, showed that Wal-Mart was 10% cheaper on comparable items than Amazon, and 5% cheaper than Target. It's reasonable to suspect that a recession would turn more customers toward Wal-Mart, or at least that the retailer could hold its own.

Looking at the period of 2008-2012, post-great recession, Wal-Mart stock performed admirably. Wal-Mart's free cash flow rose significantly, and its stock outperformed the S&P 500 during those years. 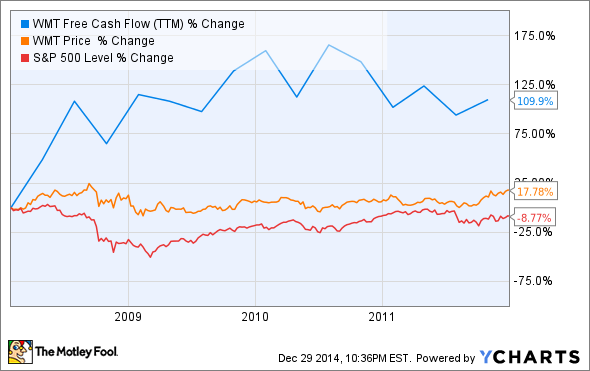 The stock market, of course, can also crash for no reason at all. While you shouldn't try to time the market and its sell-offs, stocks like Wal-Mart tend to do well in volatile times. Large-cap stocks are less volatile than small-cap ones, and dividend payers perform especially well in down markets.

According to research from BlackRock, S&P dividend-paying stocks outperform their non-dividend-paying brethren by more than 12% in bear markets. Today, Wal-Mart has a dividend yield of 2.3% -- higher than the S&P 500 average -- and a market capitalization of $276 billion.

Wal-Mart's stock does have risks. The negative perception of the brand by some is still its greatest risk. It has many competitors, and it trades at a high P/E of 17 for a low-growth business. But competition is not uncommon for retailers, and Wal-Mart's management has been proactive in meeting customers' demands. I believe that is reason to believe that the company will survive any market.

Further, Wal-Mart's brand identity as a low-price leader, along with its size and dividend, mean it would likely survive an economic downturn and remain a good stock if the market drops. This isn't a recommendation to buy the stock today. If you own it, however, you should feel comfortable that the stock will make it through tough times.