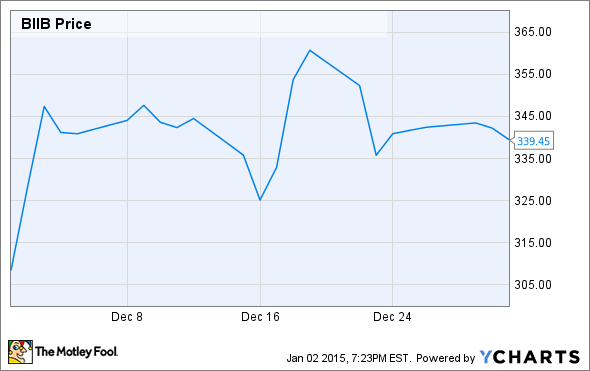 What: Shares of Biogen Idec (NASDAQ:BIIB), a biotech juggernaut primarily focused on treating multiple sclerosis and autoimmune disorders, scorched higher by 10% in December, based on data from S&P Capital IQ, on the heels of positive clinical data presented at the Deutsche Bank BioFEST Conference.

So what: The big impetus for Biogen's move higher was early stage data on BIIB037, a drug designed to treat Alzheimer's disease. In phase 1 studies, BIIB037 helped to improve cognition in patients exhibiting early stages of the disease when measured after 54 weeks, and it also led to dose- and time-dependent reductions in beta-amyloid levels in the brain. Beta amyloid is the material that's widely believed to lead to a degradation of cognitive function over time.

Because of its impressive results, BIIB037 is moving directly into phase 3 studies and is expected to deliver results sometime in 2016. The good news for investors is we'll be privy to the full 194-patient phase 1 data set later this year, which could give us even more clues to its efficacy.

Now what: The scope of Biogen Idec's move higher is simple: most Alzheimer's disease drugs fail in clinical studies. In 2012, two high-profile Alzheimer's disease drug hopefuls failed to meet their primary endpoint. Pfizer's and Johnson & Johnson's bapineuzumab was shelved completely, while Eli Lilly's solanezumab showed potential in early stages of the disease and is being further evaluated.

Alzheimer's patients have very few options to turn to when it comes to drugs approved by the Food and Drug Administration. What this means for Biogen, or any biotech developing an Alzheimer's drug for that matter, is a potentially long shelf life and substantial market share if an experimental drug succeeds in phase 3 trials. There are certainly no guarantees with BIIB037, but optimism is clearly high.

In the meantime, investors can focus on the dominance of Biogen's MS therapy Tecfidera and the recent launch of its duo of hemophilia drugs Eloctate and Alprolix. Biogen appears likely to grow its top- and bottom-line by double-digits over the next five years, making its forward P/E of 21 seem relatively inexpensive. There are certainly "cheaper" stocks in the biotech sector, but Biogen Idec's growth potentially may support an even higher stock price.