Falling oil prices were not the only reason why Denbury Resources' stock tanked in 2014. 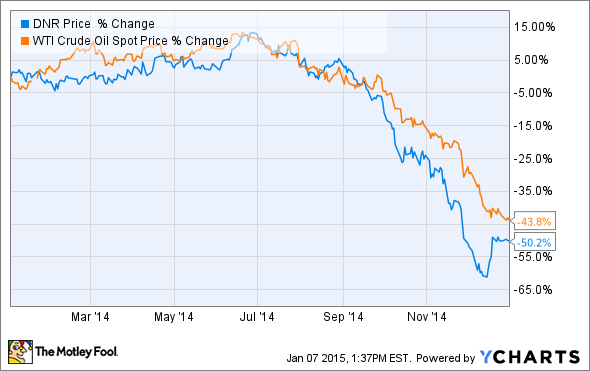 Denbury was far from the only oil stock to sell off in 2014. However, this chart shows that Denbury's stock took a particular walloping relative to some of its peers, such as Oasis Petroleum (OAS) and Concho Resources (CXO) . 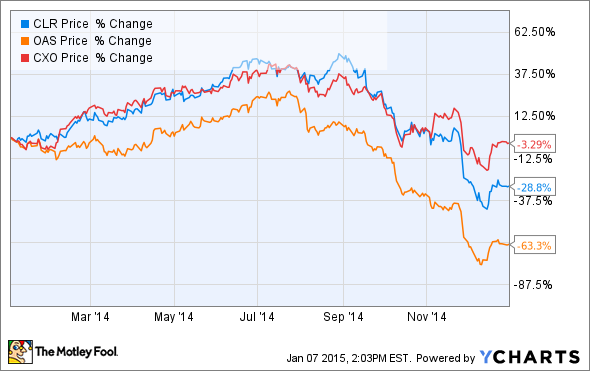 This is quite disconcerting because, all else being equal, Denbury's business model is a bit less risky than those shale-driven peers. That's because the company focuses on enhanced oil recovery, which produces high-margin and stable oil production, which is quite different from shale wells, where production declines at a rapid rate. That said, there's one key reason investors abandoned the stock last year.

Where's the growth?
In mid-November, Denbury Resources announced that its 2015 capital spending plan would be 50% lower than spending in 2014. The company thought that was the prudent course of action as the price of oil fell from about $100 to $75 per barrel. As the following slide shows, the plan would fund both the dividend and capital program with cash flow while providing the company with a little safety net of a few hundred million dollars of excess cash flow. 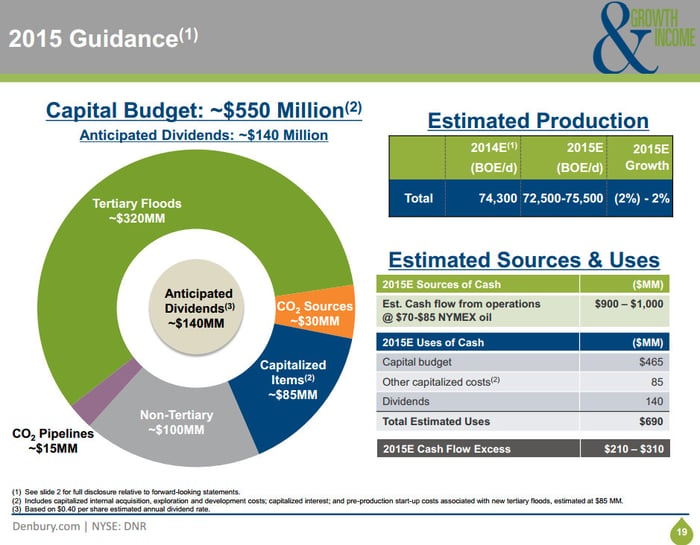 The problem is that this plan would keep production relatively flat this year, and likely would result in flat production in 2016 if oil prices stayed in the $75 per barrel range. Investors didn't like this lack of growth one bit; they promptly sold off the stock and have kept selling as oil prices continued to drop.

The big issue for investors is that the company no longer offered growth and income, just income. Moreover, that income wasn't likely to grow if oil stays depressed and it was less than investors can get from a master limited partnership. This low-yield, no-growth approach is quite the opposite of the strategy of other similarly sized shale-focused drillers. For example, both Continental Resources (CLR 0.15%) and Oasis Petroleum planned to slash capital spending by 50% in 2015. However, Continental Resources expected its production to grow by 16%-20% while Oasis Petroleum's production was expected to grow 5%-10% this year. Furthermore, Continental Resources underperformed Denbury last year only because of the company's brash decision to scrap all of its oil hedges. Meanwhile, Concho Resources is only reducing its capital budget by a third this year, but still plans 16%-20% production growth. Clearly, investors are valuing this growth potential much higher than Denbury Resources' somewhat limited income stream.

Why no growth might be a good idea
While investors are giving growth-focused oil companies a lot more credit these days, this does not mean they're right. These companies are increasing production, but cash flow likely won't budge due to the big drop in oil prices. Denbury Resources instead is saving its growth for when oil prices are higher. There is no reason for it to grow production this year while oil demand is weak and adding more oil to the market won't help improve prices.

Instead, Denbury can use whatever excess cash it produces to better position itself for when oil demand and pricing improve. It has two clear options right now: reduce its debt or look at acquisitions. Reducing its debt makes the most sense given the current uncertainty, as that would provide it with even more liquidity for a deal at some point in the future.

Investor takeaway
The market might not like Denbury Resources' decision not to increase oil production this year, but it makes sense not to add supplies to an already oversupplied market. Instead, the company will save the money it would have spent on growth. That could prove to be an important decision if oil prices stay low for an extended period of time, as Denbury will have the financial flexibility to survive when its peers might need to begin to backtrack.

Matt DiLallo owns shares of Denbury Resources. The Motley Fool owns shares of Denbury Resources. Try any of our Foolish newsletter services free for 30 days. We Fools may not all hold the same opinions, but we all believe that considering a diverse range of insights makes us better investors. The Motley Fool has a disclosure policy.