Rent is often the biggest expense that individuals and families face, but there's a simple way to save money the next time you sign a lease to rent an apartment: move in during the colder months.

Like many businesses, apartment rentals are seasonal. They peak during the summer months, tracking the school year. University students tend to move between the end and the beginning of the school year, and families also prefer to move in the summer because they don't want to take their kids out of school in the middle of the year. For those of us who live in colder climates, moving in warmer months is also easier than when it's chilly outside.

For all those reasons, turnover in the winter months is lower than at other times of year, and that means landlords have more trouble filling vacant apartments, so they are likely to lower prices rather than allowing a space that could be earning money sit empty. The best months to find a deal are between October and February, when property management companies will often simply lower the rent or offer deals such as a month or two of free rent, especially if they have a large number of vacancies to fill. If you're looking for a place with outdoor space, the savings can be even greater, as a terrace or backyard often carries a premium in the summer but is ignored in the winter. For similar reasons, the colder months are also the best time of year to renegotiate your lease. 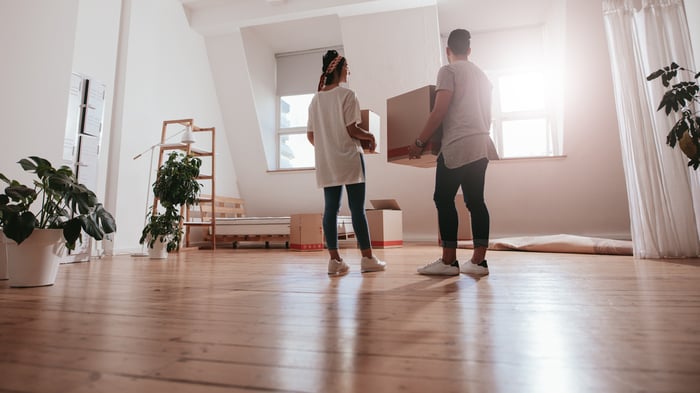 How to stretch your savings
To get an even better deal in the winter months, it's a good idea to target neighborhoods with new construction or properties that have just come on the market. Rents have boomed in the post-recession years following the housing bubble, but supply seems to have finally caught up with demand, as the apartment vacancy rate went up for the first time since 2009 in the third quarter of last year, ticking up to 4.2% from 4.1%. As more construction projects are completed, analysts expect vacancy rates to continue to increase in the near future.

What about buying a home?
Not surprisingly, some evidence shows that a similar pattern exists when it comes to buying a home, though the correlation may not be as strong. According to data from Trulia, one the country's largest real-estate websites, home prices peak in August and hit bottom in December, with prices moving by "several percentage points." A study that looked at home sales in St. Louis found that properties sold in July went for 95.1% of the original asking price, compared to 91.8% in December and January. On a $500,000 house, that difference would come out to $16,500, making it worth the wait.

Of course, there's a catch
For house hunters hoping to have a wide selection of properties to choose from, searching in the winter will bring limitations. Finding a home to rent is not always easy, so those with laundry lists of criteria may be better off shopping in the summer, when there are more properties on the market. Similarly, for those in the market to buy, the home-buying season is generally hottest in the spring and early summer, so inventory is also at its peak then.

Whether you're renting or buying, housing costs are likely to be one of the biggest, if not the biggest, expense you face. Looking for a home in the winter may not be as appealing as it is in the warmer months, but it's probably the easiest way to save money without compromising any other goals you may have for your new home.