Please ensure Javascript is enabled for purposes of website accessibility
Log In Help Join The Motley Fool
Free Article Join Over 1 Million Premium Members And Get More In-Depth Stock Guidance and Research
By Sean Williams - Jan 9, 2015 at 9:03AM

Instead of shrinking waistlines, VIVUS shareholders saw their shares shrink in value by 14% in December. Find out what troubled VIVUS in December and whether or not this dip represents a buying opportunity. 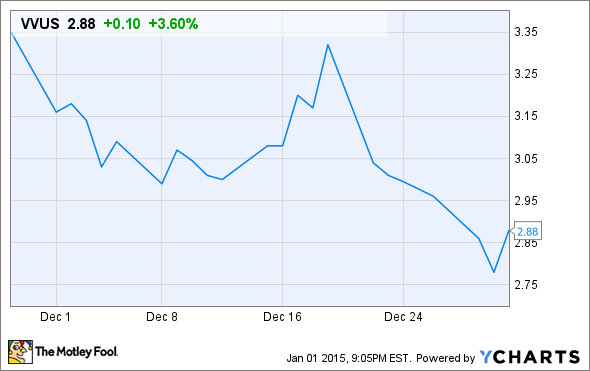 What: Shares of VIVUS (VVUS), a biopharmaceutical company focused on developing therapies to treat obesity and erectile dysfunction, tumbled 14% in December, based on data from S&P Capital IQ, after rival Orexigen Therapeutics (NASDAQ: OREX) received a favorable nod in Europe for its competing anti-obesity pill.

So what: The rough sledding continues for VIVUS with news in December that the Committee for Medicinal Products for Human Use, or CHMP, recommended Mysimba for approval. Mysimba is the European brand-name for Orexigen's recently approved anti-obesity drug Contrave.

If you recall, VIVUS brought Qsiva, the proposed brand-name for Qsymia, before the CHMP in 2012 and received a formal decision denying marketing authorization. Were that not bad enough, VIVUS was turned away again in Feb. 2013 when the EU examined VIVUS' appeal and once again denied a recommendation for approval of Qsiva. If the European Commission approves Mysimba, VIVUS shareholders will likely have to watch Orexigen enter Europe with a new weight control drug essentially without any competition.

Now what: VIVUS is really in a tough bind here, and I don't see things getting better anytime soon. Even though VIVUS gets to keep all of its Qsymia sales in the U.S. because it chose to market Qsymia on its own, it's already fallen behind the sales pace of Belviq from rival Arena Pharmaceuticals (ARNA), which is partnered with Eisai.

Furthermore, although a 52-week study comparing Qsymia, Belviq, and Contrave showed superior weight loss results for Qsymia, the drug is widely believed to be the least favorable of the three in terms of safety. The slow ramp up in Qsymia sales ($50 million per year extrapolated outward from its Q3 2014 results) would appear to imply this to be true.  Qsymia has struggled mightily to improve its insurance plan coverage and is also dealing with a less experienced marketing team.

Moving forward it's likely that sales for Qsymia will improve, and erectile dysfunction drug Stendra/Spedra will add to its top-line. However, I don't believe any of these products will get VIVUS anywhere near profitability. Cash burn remains a serious concern for VIVUS, with a potentially superior competing weight-loss product now on the market. Let's remember that Orexigen has nearly completed its 8,900-person cardiovascular outcomes study known as the Light Study, and interim data showed Contrave to be safe. With this safety data in its corner, Contrave could quickly become the drug of choice among physicians and patients.

In short, VIVUS remains a stock to avoid in my personal opinion until we see a clear reduction in its ongoing losses and an improvement in its remaining cash on hand.