Bargain hunters are often attracted to beaten-down biotech stocks because they sometimes rebound in astonishing fashion. That said, it can be extremely difficult to separate the wheat from the chaff when mulling over such companies, with many of them having little to no hope of ever reliving their glory days. 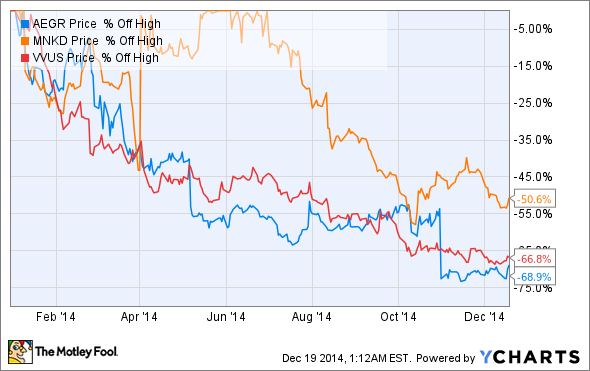 As such, they are likely garnering interest from so-called "bottom feeders" looking to pick up shares on the cheap. My view on their prospects moving forward, though, is that investing in them is more akin to making a bet in a burning house. Here's why.

Aegerion's troubles may only get worse going forward
After reporting disappointing sales of its rare disease drug Juxtapid for homozygous familial hypercholesterolemia, or HoFH, in the first quarter, we saw management repeatedly lower its annual guidance in subsequent quarters. Making matters worse, the potential commercial launch of a potent new class of lipid lowering drugs known as "PCSK-9 inhibitors" from Amgen and Sanofi could wipe out Juxtapid's sales altogether.

Management has tried to assuage investors' concerns by stating that these newer drugs will ultimately enlarge the entire HoFH market, but experts aren't so optimistic. The Street has Aegerion's shares valued at a staggering 104 price-to-earnings ratio on a forward-looking basis, meaning that Juxtapid's sales are believed to be in deep trouble next year.

Perhaps most worrisome is that management emptied the company's coffers in the fourth-quarter to acquire AstraZeneca's troubled rare disease drug Myalept, indicated for leptin deficiency in patients with generalized lipodystrophy. While management is forecasting $250 million in peak sales for Myalept, that estimate looks far too high after the drug failed to obtain a broad label including use as a treatment for partial lipodystrophy.

Looking ahead, Aegerion will have to raise money soon to both launch Myalept and cover the expenses of the required post-marketing studies, putting its stock under even more pressure.

MannKind's Afrezza must start strong
MannKind shareholders are always eager to tout the company's newly approved inhaled-insulin product Afrezza as a "game-changer" destined for blockbuster status. According to Afrezza's label, though, it looks more like an add-on product for certain types of diabetics needing more insulin, or as an alternative to needles for patients not yet taking injected insulin.

Such a niche market could indeed be profitable given the immense size of the insulin market. The issue, however, is that MannKind has already amassed a market cap of $2.2 billion and, as per the terms of a marketing partnership with Sanofi, is only in line to receive a 35% cut from Afrezza's profits, which translates into about 25% of total sales.

If Sanofi were somehow able to gain favorable reimbursement status with payers sooner rather than later, I think a really strong launch would still only rake in about $200 million in its first year on the market. That puts MannKind on track to recognize a mere $50 million in Afrezza sales.

Given that payers may end up balking at covering a medically unnecessary product such as Afrezza (it can't replace other insulins), there is a serious risk that this product stumbles -- instead of roars -- out of the gate.

VIVUS can't catch a break
Turning back the clock to 2012, VIVUS shareholders were reveling in FDA approval of the company's weight loss pill Qsymia. The drug was expected to quickly reach blockbuster status in light of the growing and epidemic nature of the obesity problem in the U.S., and VIVUS shares rose over 100% in just six months heading into Qsymia's regulatory decision: 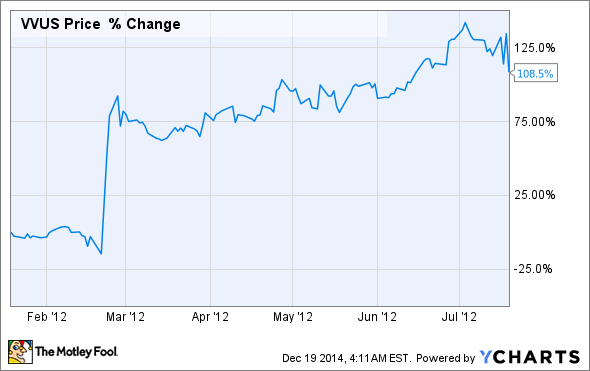 VIVUS's diet pill has failed to live up to expectations, however, with sales plateauing at around $50 million a year, according to the company's third-quarter earnings release. 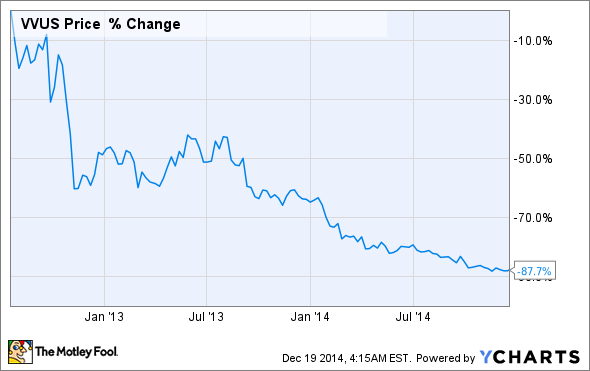 According to early reports, Contrave sales have already equaled that of Qsymia, due in no small part to Takeda's monster marketing effort, including a sales force of 900 reps.

Because of this increased competition, VIVUS's erectile dysfunction drug, Stendra, might end up being the company's saving grace. The problem, though, is that Stendra also hasn't lived up to the hype, with VIVUS only booking $23.5 million in total revenue from the drug this year.

Are any of these stocks worth the risk?
Beleaguered shareholders of the three companies may be holding out hope against hope that a turnaround is on the way. In each case, though, I think the odds aren't in their favor.

Aegerion's management appears to be repeating the same mistakes with Myalept as it did with Juxtapid (overestimating commercial potential); MannKind's licensing deal with Sanofi makes it hard to see a way forward in terms of value creation; and VIVUS has all the earmarks of a sinking ship.