Shares of VIVUS Inc. have crashed by over 60% in the past year. Is the stock still a good short sell?

Short selling is a high risk, high reward investing strategy that requires a rock-solid investing thesis to pull off successfully. Even then, short sellers often guess wrong and pay dearly in the form of a so-called "short squeeze."

Healthcare and biotech stocks tend to attract short sellers in droves because they often have a premium built into their share prices that reflects the commercial potential of their clinical pipelines. In other words, biotechs tend to trade at rich premiums for reasons that could evaporate in a hurry due to a clinical or regulatory setback.

VIVUS (VVUS) is presently the fourth most shorted stock in the healthcare sector, and for good reason. Specifically, the company's flagship diet drug, Qsymia, has been an unmitigated disaster in terms of its commercial performance to date. Despite over 30% of Americans meeting the criteria that define the term "obese," this new generation of weight-loss pills, that includes Qsymia, appear to have garnered less than 1% of their potential target market based on my estimates. 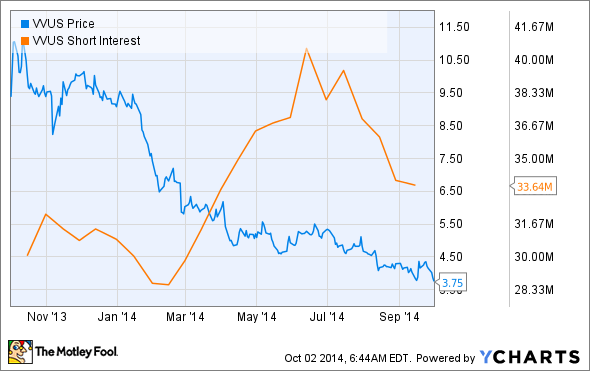 Given the nearly 60% drop in VIVUS's share price year to date, I think it's a good time to pose the question: Is this stock still a good short candidate or is the bottom finally here? With that in mind, let's take a look at the company's prospects moving forward.

VIVUS has long sought a top flight marketing partner for Qsymia but has failed thus far in inking an agreement. Arena and Orexigen, by contrast, have first rate sales teams financed by major pharma partners. And Novo Nordisk is no slouch when it comes to marketing either. In sum, I think Qsymia will continue to be marginalized due to a lack of a top-notch marketing partner, and newer, well-financed, competitors entering the obesity game.

Can Stendra save the day?
VIVUS's erectile dysfunction drug, Stendra, was approved by the FDA nearly two years ago. And despite licensing the drug to stronger marketing partners like Auxilium Pharmaceuticals, (NASDAQ: AUXL), the drug hasn't made much of an impact on VIVUS's bottom line so far. In the first half of this year, for instance, VIVUS booked only $23.5 million in milestone and licensing revenue from Stendra.

On the bright side, VIVUS and Auxilium recently announced that the FDA approved Stendra's label expansion application, allowing the drug to be taken only 15 minutes before sex. This could help Stendra gain market share against entrenched blockbusters like Viagra and Cialis. That being said, the jury is still out on whether Stendra can turn the tide for VIVUS.

Foolish conclusion
VIVUS's dramatic fall this year has shares valued close to the company's cash position, based on my estimates from last quarter's numbers. That's a pretty bearish valuation for any company, especially a biopharma. Even so, I tend to agree with the bears that Qsymia will never be much of a revenue generator, leaving Stendra as the main value driver going forward.

Like Qsymia, Stendra has oodles of commercial potential based on the sheer size of its target market. So, the real question is whether the drug can realize its potential?

My view is that Stendra's label expansion won't be good enough of a reason for consumers to switch brands en masse, making it unlikely that the drug will ever claw a significant portion of market share away from Cialis or Viagra. As such, I expect VIVUS's shares to continue their slide for the foreseeable future.

The 3 Most Disappointing Drug Launches of All Time

Forget About Ebola Stocks and Invest in This Instead