If you thought low gas prices could kill the electric vehicle revolution, the industry's record sales in December will come as a big surprise. According to InsideEVs, 12,874 EVs were sold in the U.S. during December, more than any month in history. This comes as gas prices were plunging toward $2 per gallon.

We shouldn't draw too many conclusions from a single month, but this could be a sign that EVs have become a sustainable business, driven by more than just high gas prices.

BMW's i3 is an all electric vehicle made with a carbon fiber frame. Source: BMW.

Incredibly, as gas prices fell, EV sales were constant to slightly higher, highlighted by record December sales of 12,874 units. Below, you can see how overall sales trended during 2014 versus gas prices. The correlation you might expect, of sales dropping as gas prices drop, hasn't come to fruition yet. 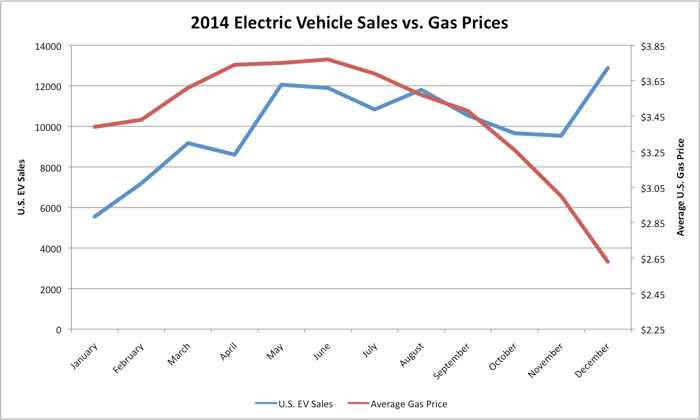 Part of that may be a lag between low gas prices and changing buying decisions, but SUV sales were up late in 2014, so other parts of the auto market adapted quickly to lower prices. Maybe EVs are becoming a mainstay in the auto industry?

Who is selling all those EVs?
Surprisingly, Tesla Motors (NASDAQ:TSLA) wasn't the leader in U.S. EV sales during 2014, despite leading the industry in headlines. The company sold and estimated 17,300 Model S during the year, less 15% of the market and only good enough for third place.

Sales growth in 2014 is great, and December's figure was impressive, but for EVs to be more than a bit player in the auto market, there still need to be more offerings and technology improvements that make them more competitive. That's where 2015 could bring some key advancements.

The Tesla Model S has become an icon of the EV market, but it doesn't lead the U.S. in sales.

How EVs can grow in 2015 and beyond
The last five years have shown that consumers are willing to trade in conventional vehicles for EVs if they can get where they need to go. The Chevy Volt, for example, is actually a hybrid, reducing EV range anxiety that buyers inevitably have. Tesla has answered the range question by offering nearly 300 miles in range in its high-end Model S. But further improvements have to bring adoption of EVs to an even wider audience. For now, it looks like most automakers are tiptoeing into the market with hybrids rather than betting the farm on a full EV.

In 2015, we'll see a number of new EVs hit the road, most notably in the SUV and crossover market. Tesla's all electric Model X is due out in the second half of the year and is the most anticipated EV of the year. The hybrid BMW X5 eDrive, Audi Q7 Plug-in, Volvo XC90 T8, and Mercedes-Benz GLE-Class Plug-in are a few others that could catch the attention of drivers.

Expanded product offering and investments by new EV players is good, but for EVs to grow significantly in 2015 and beyond, more companies need to advance EV range, beyond the 300 mile limit Tesla is bumping up against. To completely replace a conventional vehicle range anxiety can't be an issue, and even at 300 miles, it would be a stretch for long trips. To move beyond that, battery technology likely needs to take another leap forward, which may take a few years.

EVs are showing some staying power
The 2014 sales numbers for EVs are impressive, and new vehicles coming out in 2015 should expand the market incrementally. But the challenge competing against $2 per gallon gas will come down to offering a vehicle that can go far enough on a charge to ease range anxiety and offers better performance than a standard car.

I'm bullish on the future of EVs, but it may be a while before a majority of the population sees them as a real option when buying a vehicle. Until then, small steps forward in EV offerings and technology will slowly grow the market until range anxiety is a problem of the past.