Please ensure Javascript is enabled for purposes of website accessibility
Log In Help Join The Motley Fool
Free Article Join Over 1 Million Premium Members And Get More In-Depth Stock Guidance and Research
By Travis Hoium - Jan 10, 2015 at 9:30AM

The market has beaten up offshore drilling company Seadrill and now may be the perfect time to buy the stock.

There's no doubt that Seadrill (SDRL) stock is a big risk for investors to own today. Shares trade 75% below their 52-week high and if oil prices don't recover the stock may not either.

But if you think it's only a matter of time before oil recovers, there may not be a better way to play the energy market than Seadrill. The company is well positioned within the offshore drilling market and has the backlog to stay afloat until the price of oil does improve.

New rigs command the most work
One of the dynamics we've seen take center stage in offshore drilling lately is the bifurcation of new and old rigs. Energy explorers would much rather contract with a new rig that has improved capabilities and safety features than an old rig, meaning companies with newer rigs are in a great position. 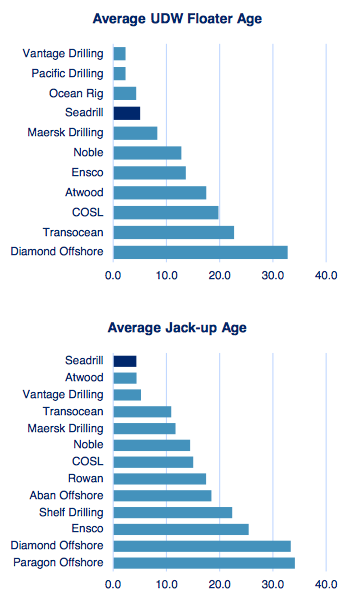 You can see in the charts on the right that Seadrill has one of the newest fleets in the industry and is therefore in a great strategic position.

Long term, the advantage of owning new rigs is that it'll be easier to find work and there's little risk a company would have to write a new rig off entirely. Rigs that are getting to be older than 30 years are in danger of being out of work. And if these older rigs aren't utilized for an extended period, companies are likely to scrap them as opposed to eating the cost to keep them in the fleet. Competitor Transocean (RIG -0.48%) said recently that it is scrapping seven older mid and deepwater rigs and may do more of the same with these older rigs in the future. There's little risk of scrapping for Seadrill and its fleet looks more attractive when competitors jettison old rigs.

Scrapping older rigs reduces overall supply in the offshore drilling market and improves the likelihood companies will find work at strong dayrates for newer rigs. That's where Seadrill has an advantage versus other drillers as long as it can wait long enough for drilling conditions to improve.

Backlog will keep Seadrill afloat
Taking a long-term view, Seadrill is in a great spot, but short term, Seadrill has to worry about simply paying the bills. But on that front, it is also well positioned. It has $24 billion in backlog for the full Seadrill Group and 2015 alone has more than $6 billion of contracted backlog, as you can see in the chart below. 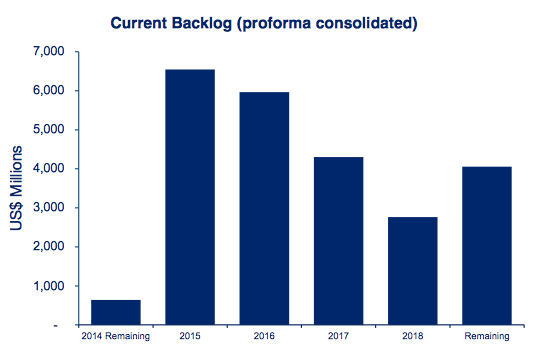 As of the end of the third quarter, 91% of available days in 2015 were contracted in the floater segment and 74% of the jack-up fleet was under contract. So, Seadrill has the contracted cash flow to keep operations going for the short term. It's 2016 and beyond that investors need to worry about.

Oil markets have to get really bad for a long time for Seadrill to sink
During a presentation in September, Seadrill's management gave us an idea of just how bad conditions would have to get for the company to be less than cash flow break-even. You can see in the image below that the floater fleet of drillships and semi-submersibles would have to see dayrates fall to about $359,000 to be breakeven, assuming 95% utilization.

The $156,000 cash cushion from today's dayrates allows management to accept much lower contract rates and still keep the company afloat. Remember that Petrobras signed an extension and a new contract for a total of four rigs in the third quarter, averaging over $500,000 per day for a three-year duration, so that's where the market was a few months ago.

Market conditions will have to get a lot worse for Seadrill to lose money. That's possible given oil prices near $50 today, but if you think oil is going to rise in the next one to three years, then Seadrill will be a big beneficiary.

Why the stock has huge upside
Seadrill is well positioned to profit if oil prices improve and with 16 rigs under construction as of the end of last quarter it has room for growth as well. But how high could the stock fly?

Below is a chart of Seadrill's enterprise value divided by EBITDA -- earnings before interest, taxes, depreciation, and amortization -- for the trailing 12 months of operations over the last five years. You can see that the valuation multiple has plunged as shares have fallen. 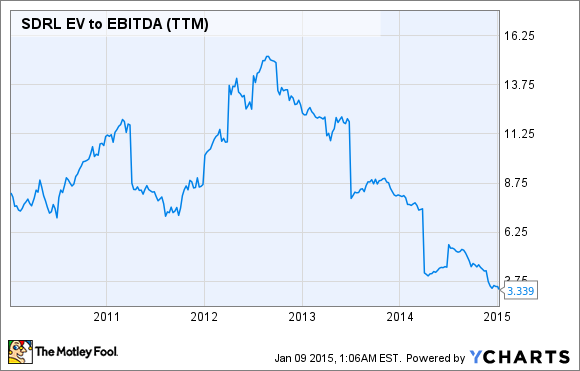 If we take the last 12 months' EBITDA of $3.6 billion and assume the stock recovers to an eight-time multiple, after pulling out $13.1 billion in debt the company should be worth about $15.9 billion. That's triple today's $5.1 billion market cap.

It's not a stretch to think shares will triple, or more, but keep in mind that there's a lot of risk in Seadrill. If oil stays below $50 per barrel for several years, the company could go bankrupt under the weight of its debt load. With high reward potential comes high risk, but I think Seadrill is worth it and I'm holding onto my shares.