Tesla Motors (TSLA 4.67%) stock hit an eight-month low Wednesday, trading at about $192 and down nearly 7% at the time of this writing. The day's decline follows a general downtrend for the stock since it hit an all-time high of $290.50 in the second half of 2014. 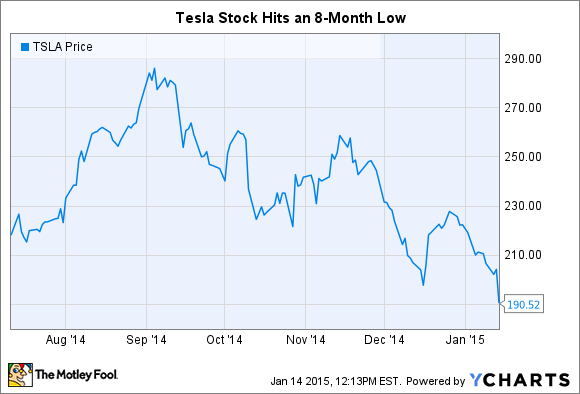 As has happened many times for Tesla stock, the volatility was triggered by some of the words spoken by CEO Elon Musk. Musk took the stage in Detroit Tuesday at the Automotive News World Congress. While he talked about a variety of topics, two particular comments from the CEO spooked investors.

Demand in China for the Model S isn't looking so hot
Perhaps the most notable surprise in Musk's interview was a comment about demand for Tesla vehicles in China.

While Musk explained that sales grew in North America and Europe during Q4, he said there was a slowdown in China.

"I'd say that China was certainly a lot weaker than expected. [This was] mostly -- I think -- about the misperception about the difficulty of charging, which we are correcting," Musk said. "And we are seeing now an uptick in our sales in China. They just weren't all that significant in the fourth quarter." He went on to say that he thinks the China situation is temporary.

But thanks to Tesla's overall global demand that continues to outstrip supply, Musk says any slower-than-expected growth in sales in China was "more than made up for in North America."

Musk has said that he believes the company could eventually sell as many cars, or more, in China as it does in the U.S. So, it's no surprise that the market doesn't seem to like this news. For long-term investors, however, it's nice to hear that he believes the blip really is temporary.

This charging issue is one of the reasons Tesla's vice president of operations in China, Veronica Wu, left the company in December, according to the Wall Street Journal.

Tesla says that its Supercharging network, which is currently within 150 miles of 80% of the U.S. population, has significant penetration in Europe, and is just beginning expansion in Canada, will cover most of China within two years.

For Model S owners, Tesla says Supercharging will be free for life. Owners can charge from a zero charge to an 80% charge in 40 minutes. When not traveling long-distance, Tesla recommends owners install a 240-volt outlet for overnight charging at home.

Net income won't come soon
Some analysts were predicting Tesla would begin to report profits under generally accepted accounting principles as early as this year. But this won't be the case, Musk says -- not even close. He predicts that Tesla won't be profitable on a GAAP basis until 2020, when the lower-cost Model 3 is in full production.

Tesla plans to launch the Model 3 in 2017, alongside the completion of its Gigafactory, which is purposed to build enough batteries for 500,000 cars per year by 2020. Tesla hopes that by 2020, sales volume of 500,000 vehicles per year will finally help the company report GAAP net income.

Musk was careful to explain that given the company's impressive gross profit margin, which he says will be in the mid-to-high 20-to-30-percentage-point range in Q4, Tesla would be able to report GAAP net income if it weren't investing aggressively in the growth of new areas like the Model X, the Gigafactory, and early work on the Model 3.

Depending on how investors look at this, it isn't exactly bad news. For a growth company like Tesla, more investments in growth often means more future earnings potential. Furthermore, Tesla's plan to invest aggressively enough that it won't report GAAP profits until 2020 is a sign that Tesla is likely extremely confident in the prospects for sales growth. Perhaps it's this same confidence that led Musk to say during the interview that he expects Tesla to be selling a few million cars per year by 2025. This makes Tesla's 2014 estimated sales of 33,000 vehicles look like almost nothing.

But along with big growth investments could come greater risk. If the future market for electric vehicles is not as optimistic as Tesla believes, spending so heavily on growth could put Tesla in a tough position.