Please ensure Javascript is enabled for purposes of website accessibility
Log In Help Join The Motley Fool
Free Article Join Over 1 Million Premium Members And Get More In-Depth Stock Guidance and Research
By Steve Symington - Jan 17, 2015 at 8:50AM

While McDonald's tries in vain to target Millennials, Burger King is being run by them.

Before Burger King officially completed its merger with Tim Horton's last month to form Restaurant Brands International (QSR 0.62%), comparing its stock to that of McDonald's Corporation (MCD -0.80%) was a perfect exercise in contrast: 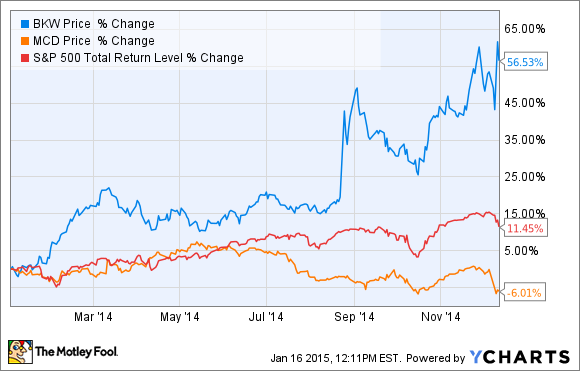 McDonald's millennial problem
It's no mystery that McDonald's is struggling right now. Given the killer combination of its complicated menu, consumers' perception of its food as low-quality, and increasingly fierce competition in the space, the world's largest fast-food chain has suffered seven straight months of comparable-store sales declines.

To its credit, McDonald's is working diligently to address these problems, most recently with a new streamlined menu and a scripted ad campaign aimed at answering questions about the quality and origins of its food. But one of the biggest challenges McDonald's faces today is the rejection of its wares by the millennial crowd -- that is, consumers roughly defined as being born from the early 1980s to the mid-2000s.

When asked during last quarter's conference call about their struggles to resonate with millennials, McDonald's CEO Don Thompson conceded the age group's use of the quick-service restaurant industry as a whole is declining. Consequently, he elaborated, McDonald's is working to win over these younger diners by creating an open dialog on Millennial-esque issues like food quality and supply chain transparency, as well as through the adoption of new digital mediums like mobile technology and kiosk-based ordering with its recently expanded "Create Your Taste" initiative.

So, what's the difference? While McDonald's strives in vain to target millennials, Burger King's CEO is one.

And he's not alone in his youth, either. As of last summer, Burger King CFO Joshua Kobza was just 28, and its head of investor relations, Sami Siddiqui, was only 29. In fact, the average age of Burger King's entire executive team is just 39.

Schwartz was initially swept into the world of fast food as part of a massive management overhaul brought on by Burger King's sale to investment firm 3G Capital in 2010. He subsequently spearheaded several key global initiatives as CFO and (later on) COO, including an aggressive international growth plan which heavily increased Burger King's focus on maximizing the potential of franchising. Schwartz also commissioned the company's effective North American restaurant image transformation program. After all, nobody wants to eat in a run-down restaurant when there are so many fresh, clean, contemporary options available.

But more importantly, even though Schwartz spent almost a decade on Wall Street after he graduated from Cornell, he's not afraid to get his hands dirty. Shortly after he was promoted to CEO in mid-2013, he spent his first months gaining valuable insight by actually working in local Burger King restaurants -- cooking Whoppers, taking orders, and even cleaning toilets -- all in an effort to better understand and improve the daily life of his employees.

After having trouble keeping up with orders from BK's own recently expanded menu at the time, for example, he promptly commissioned a simplified menu comprised of easy-to-assemble items while still offering sufficient variety to keep diners coming back for more. The menu also avoided the lowest margin items like Burger King's $1 double cheeseburger, which kept franchisees happy and their operations firmly in the black.

In short, Schwartz knows exactly what it takes to not just bolster his company's bottom line through streamlining efficiency, but also to please younger diners who other chains continue to find so difficult to lure. With that in mind, and with time on his side, I see no reason Burger King won't continue to thrive as McDonald's suffers.

Steve Symington has no position in any stocks mentioned. The Motley Fool recommends McDonald's. Try any of our Foolish newsletter services free for 30 days. We Fools may not all hold the same opinions, but we all believe that considering a diverse range of insights makes us better investors. The Motley Fool has a disclosure policy.