T. Boone Pickens has been in the oil business for about 50 years. Over that time he has seen his share of booms, busts, and subsequent recoveries. He thinks the current bust in the price of oil is just like all the rest: supply is out of whack, OPEC is talking tough, and the U.S. oil industry must brace for another ugly downturn.

That being said, Pickens doesn't think the latest bust will last all that long. In fact, in December he made a bold call that the price of will be back over $100 per barrel within the next 12 to 18 months. However, before oil can rebound, the price must hit bottom. Pickens, who has seen his share of oil market bottoms over the years, gave investors an important sign to look for that prices are at rock bottom. The sign, he said in a recent social media chat session, is a big drop in the number of operating drilling rigs.

During the chat, Pickens was asked, "what are the signs you will look for to determine that the oil [market] may be bottoming?" He responded: "too many to list here, but one key factor is [the] number of drilling rigs operated." He later elaborated in the answer to another question:

Pickens was referring to the U.S. rig count, which is the number of rigs active in drilling new oil and gas wells. His comments suggest that the price of oil will finally stop falling when a sufficient number of rigs are idled. This is because oil rigs are the key to adding new supply to the market, so a significant reduction in the number of rigs should start to contract the current oversupply of petroleum.

The following chart illustrates a compelling historical correlation between plunging rig counts and a bottoming in oil prices. 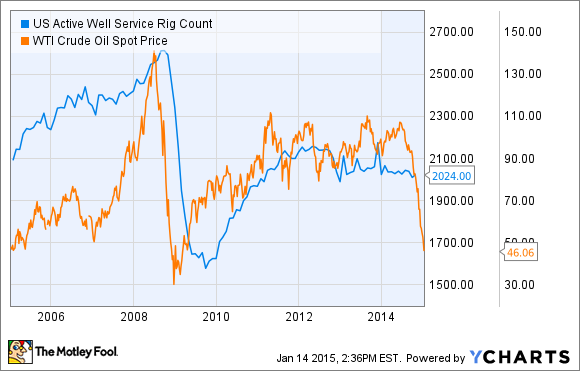 Note that in the 2008-2009 oil price plunge about 1,000 rigs, roughly 40% of active rigs at the time, went idle in a short period of time. However, the price of oil actually started to recover well before the rig count did. This is why Pickens thinks the rig count will only fall by 500-600 from the recent peak of around 2,000 rigs. before oil prices are ready to rebound. By his count the industry has already stopped operating about a third of the rigs necessary to put a bottom in oil prices.

Rigs are dropping like flies
Typically, the U.S. rig count changes rather slowly. Oil companies tend to sign a rig contract for months or even years, and they stagger the expiration dates of these contracts. But the current rig count is coming down fast. For example, the rig count in North Dakota's Bakken shale recently fell to its lowest point in four years -- down to 159 from the 183 rigs that had been drilling in the state in December. This is a direct result of massive capital expenditure reductions by oil companies: Bakken-focused drillers Continental Resources (NYSE:CLR), Oasis Petroleum (NYSE:OAS) and Halcon Resources (NYSE:HK) have all slashed capital spending by 50% from previous levels.

Oil companies are also increasingly bailing on rig contracts, often writing big checks not to drill new wells. Pioneer Energy Services (NYSE:PES) alone has been handed back seven rigs so far this year, and has been paid $22 million in early termination fees for these contracts. The company expects contracts for another 10 rigs will be terminated before the end of the first quarter. We can expect to see more announcements of early rig contract terminations, as oil drillers would rather pay the fee than lose big money on an unprofitable well.

Investor takeaway
While markets tend to be irrational, there are signs that a panic is subsiding and a market is bottoming. When it comes to oil prices, T. Boone Pickens suggests investors watch rig counts, which have a pretty direct correlation to the price of oil. He believes the U.S. needs to drop 500-600 rigs from its peak of around 2,000 before we hit bottom. According to the rotary rig count published by oil driller Baker Hughes, the total rig count for onshore and offshore assets stands at 1,729 as of Jan. 16. That suggests that we're likely going to see many rig reduction announcements over the next few months.