Many benefits have come from innovation, but the creation of cashless society may not be one of them. After a brief respite following the Great Recession, shoppers are increasingly embracing credit again, and monthly debt payments are piling up.

Heading higher
Consumer spending on clothes, cars, and condos has surged in the past few years as the unemployment rate has dropped and excessively tight bank lending standards have eased. 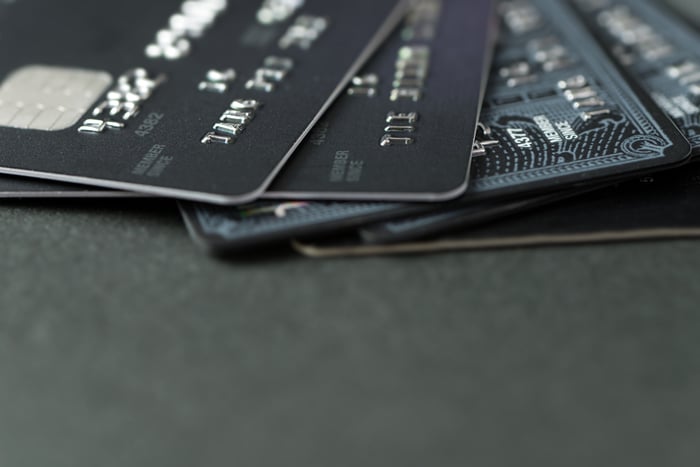 According to the Federal Reserve, the amount of revolving credit outstanding, which primarily reflects credit card debt, totaled $882.12 billion in November, up from $853.28 a year ago. That 3.3% growth outstripped the average American's income growth of 1.7% in the past year.

But consumers aren't just borrowing more on their credit cards; they're also taking on more student loan, auto, and mortgage debt, too. Student loan debt outstanding has climbed from $1.21 trillion to $1.3 trillion; auto loans outstanding have grown from $866.44 billion to $943.76 billion; and mortgage debt outstanding increased $35 billion between the second and third quarter to $8.13 trillion. As you can see in the following chart, growth in the dollar amount of student loans outstanding has ultimately remained pretty constant over the past five years, but the trend in borrowing for student loans, vehicles, and housing has climbed. How do you stack up?
According to the U.S. Census, there are 115.6 million American households in 2010. That means that if we divide the total revolving credit outstanding by the number of households, the average family has $7,630 in revolving debt. The U.S. Census also reports that in 2010 there were 234.56 million people over the age of 18 years old, which suggests that the average adult owes $3,761 in revolving credit to lenders. Across the average household, American adults also owe $11,244 in student loans, $8,163 on their autos, and $70,322 on their mortgage Making changes
If your debt balances are higher than those averages, don't despair. There's plenty of time to make changes to that could have significant impacts on your financial security down the road.

People who have higher than average debt should consider doubling their monthly minimum payments or doing an extra monthly payment over the course of the year. Those payments will go a long way toward helping you reduce those balances, especially on high interest credit cards. Consumers should also be aware that payments that are made above and beyond the minimum payment on a credit card are applied to the highest interest rate on the card. So if you have a card with a 0% rate on a balance transfer and a 13% rate on purchases, money paid above the minimum payment will go toward the 13% balance, not the 0% balance. Also, keeping a little cash in your wallet to pay for everyday items can keep those expenses from offsetting the headway you're making. Those suggestions won't eliminate your debt overnight, but they will go a long way toward stopping debt from piling up.