Please ensure Javascript is enabled for purposes of website accessibility
Log In Help Join The Motley Fool
Free Article Join Over 1 Million Premium Members And Get More In-Depth Stock Guidance and Research
By Lee Samaha - Jan 20, 2015 at 10:04AM

Three metrics that Boeing investors can monitor throughout the year.

Boeing (BA 1.26%) investors will be wondering what the stock price has in store for them this year. After a difficult start to the year, the stock has been range-bound roughly between $120 and $135. Can it break out in 2015?  To help readers answer this question, I've picked out three of the key indicators of Boeing's operations and end demand to watch this year.

Boeing's production ramp-up
As ever, Boeing investors will be closely following its orders and deliveries in 2015. The 737 is likely to remain the workhorse of the company's commercial aviation business (see the order table below), and investors should focus on how Boeing progresses in ramping up production.

On the third-quarter conference call, CEO Jim McNerney outlined Boeing's plan to boost production on the 737 "from the current rate of 42 per month to 47 in 2017 and then increase production again to 52 per month in 2018."

Turning to the 787, McNerney said Boeing was aiming for "production rate increases from today's 10 per month to the previously announced rate of 12 per month in 2016 and then up to 14 by the end of the decade."

As the table below demonstrates, the 737 is Boeing's most ordered airplane in recent years, while, as we shall see later, the 787 program is subject to concern about its production costs.

Conveniently, Boeing publishes data on current-year deliveries on its website. Along with the delivery numbers, investors should also follow the impact on operating margin of boosting production rates.

Boeing's order book and why the 777 matters
The following table of Boeing's historical net orders demonstrates the importance of the 737 and, increasingly, the 777 -- the key thing to look for in the order book.

However, not all 777s are made equal. The 777 model has a new plane, the 777X, which is scheduled for production beginning in 2017 and first delivery in 2020. Since production of the 777X won't begin for a couple of years, Boeing's challenge is to bridge the gap between production on the 777 and the 777X.

The issue is important, because at the time of this writing, Boeing only has 278 unfulfilled orders for the legacy 777. At the current production rate of around 100 a year, Boeing has almost three years of 777 orders in its backlog. However, the 777X isn't expected to be delivered until 2020 -- leaving the company with a potential gap in deliveries between the 777 and the 777X. In short, Boeing needs new orders on the 777, or it may have to slow production rates on the airplane.

McNerney said on the Q3 conference call: "We expect demand for the 777 to remain healthy through the end of this decade with an anticipated average order capture around 40 to 60 airplanes per year to support the transition to the 777X."

According to Boeing's order data website, sixty-three 777 aircraft were ordered in 2014. The chart below shows the split of 777 and 777X orders in the last few years. Investors should look for Boeing to hit McNerney's guidance for orders on the legacy 777 in 2015.

(For readers wishing to follow Boeing's progress in this area, data on 777 and 777X orders can be obtained from Boeing's website. Simply create a "user defined report" and choose the 777 in the "select model information" section.)

787 deferred production costs
Boeing's accounting allows it to spread out of costs on the 787 program over time in order to adjust for the huge initial capital investments needed for the new model. Deferred production costs simply represent the difference between the estimated average cost of the program and its current costs. (Readers wanting more information on this can look to this useful article on the subject, from fellow Fool Daniel Ferry.)

On the third quarter conference call, Boeing CFO Greg Smith said the company increased its deferred production cost on the 787 in Q3 by "$947 million to $25.2 billion, largely driven by the increase of 787-9 production and the continued inventory pull ahead."

As noted earlier, the deferred production cost will start to decline when its current costs are lower than the estimated average cost of the program. However, it's already at $25.2 billion, and on the Q3 conference call,  management made no firm commitment that it would start to come down from this figure in short order. 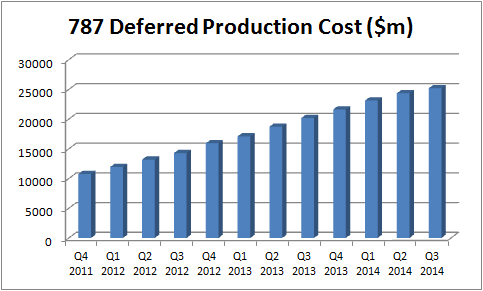