For the manufacturer General Electric (NYSE:GE), the fourth quarter of every year tends to overshadow the first three periods. In the home stretch, large corporate customers are spending, earnings are more robust, and investors are eager to digest the company's forecast for the year ahead.

As GE officially wraps up fiscal year 2014 on Friday, the announcement of fourth-quarter results should be particularly interesting. The lead story will undoubtedly be tumbling oil prices, but investors will also gain insight into the Alstom merger and the banking and appliance spinoffs. Each of these will influence how 2015 unfolds for GE.

In addition, here's what you need to keep your investing eye on when GE presents on Friday morning.

First, the financials
Let's begin by dissecting the earnings outlook. Over the last year, GE's made a habit of meeting or beating the Wall Street consensus earnings predictions each quarter.

In the first and third periods of 2014, GE surpassed bottom-line expectations by a penny; in the second, it matched the average posted by Wall Street analysts. Looking at the final quarter, GE is expected to deliver earnings per share of $0.55, which compares to actual results of $0.53 per share in 2013's last quarter. 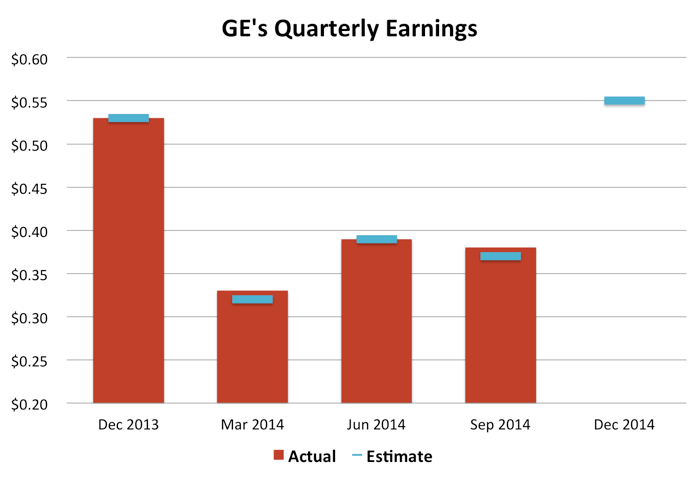 There's good reason to believe GE will report earnings that meet or beat this target. For one thing, an earnings increase of $0.02 per share year over year is not a very tall order, even though the company's in the midst of a substantial restructuring.

What's more, during a December investor update that took into account significant declines in oil prices, CEO Jeff Immelt indicated that the company was "on track" for 2014 targets.

It's not that GE won't experience a setback in its oil and gas equipment business, but that the company could actually benefit if the drop in energy prices spurs economic growth in its most important geographies -- notably the U.S., Europe, and China.

Finally, as laid out at the beginning of the year, GE expects to hit the following targets for its industrial and banking businesses:

An increase on the industrial side of things coupled with a decline in GE Capital puts GE one step closer to its desired earnings ratio of 75% industrial and 25% banking by 2016. And over the next 12 months, advancements in three major deals -- Alstom, Synchrony, and GE Appliance -- will also push the company closer to this overarching objective.

A look into the crystal ball
With 2014 winding down, we should learn more about what's in store for GE in 2015. And even though economic forecasting is more of an art than a science, here's what was on the radar when GE presented in December.

The big buzzwords are oil, the U.S. economy, and China. Yes, there are plenty of other variables at play, but these will be the challenging ones to predict as we peer into the future. GE also laid out a dozen or so additional factors that will play into top-line growth in 2015 in the following slide: 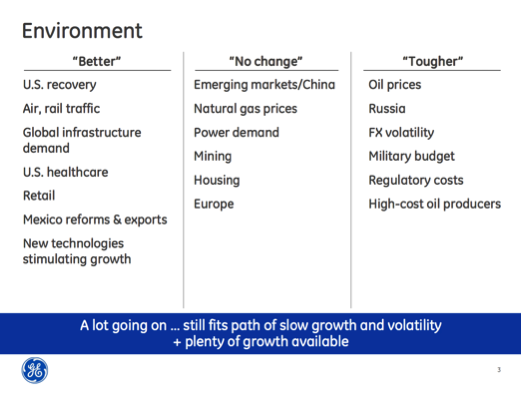 As for the U.S. economy and China, a shift seems to be under way: China's growth is slowing as the U.S. continues to hum along nicely. This trend, according to an economist from Nuveen Asset Management, could have serious implications. For the first time in nearly a decade, the U.S. economy could contribute more to global GDP growth than China will in 2015. That's good news for GE. Even though it's typical for investors to associate emerging markets with growth opportunities, the truth is that U.S. multinationals like GE are still heavily tied to their domestic operations.

As for the oil markets, it's a tough call how this will play out for GE in 2015. My colleague Eshna Basu pointed out that GE has adopted a "worst-case scenario" forecast for 2015 that calls for a leveling off at around $60 to $65 per barrel during the year. Within this range, GE's projected earnings in its industrial segments are achievable targets.

However, the spot price of a barrel of Brent crude is currently hovering around $50 per barrel, or 20% below the midpoint of that projected range. Obviously, this worst-case scenario hypothetical was established before the latest plunge, or else GE is skeptical that such low prices can be sustained.

GE's built-in hedge
While this Friday's earnings announcement won't provide a crystal-clear forecast for where energy prices are headed in 2015, it will be important to watch how the commodity is affecting GE's oil and gas division. This division accounted for roughly 18% of revenue and 15% of profits through the first three quarters of 2015, but there's reason to believe it could be partially shielded from steep price declines. For instance, 60% of the segment's revenue stems from equipment related to measurement and controls, turbomachinery, and downstream operations, none of which (according to GE) would be susceptible to a downturn if the price continues to drop.

All things considered, oil is unlikely to make or break the next fiscal year for GE. As Immelt likes to say, this is a company that's seen its fair share of crises and stumbling blocks in recent years. And volatility is par for the course at this $146 billion global company.

What investors want to see is constant profit margin improvement, a streamlined portfolio that makes sense for a manufacturer, and steady cash flow generation. If GE can deliver in these areas and reveal a path to more revenue growth, long-term investors will be content to stick with this stock.