Please ensure Javascript is enabled for purposes of website accessibility
Log In Help Join The Motley Fool
Free Article Join Over 1 Million Premium Members And Get More In-Depth Stock Guidance and Research
By Todd Campbell - Jan 22, 2015 at 8:03AM

Rite Aid's (RAD 5.59%) restructuring has already taken it from the brink of bankruptcy back to profitability, but the company's net income could head considerably higher over the next couple years as interest payments plummet.

Back on solid ground
Drowning in debt tied to its acquisition of Eckerd in 2007 and facing stagnating sales due to the Great Recession, many investors labeled Rite Aid a has-been retailer destined for the dust bin. But what a difference a couple years can make.

Thanks to savvy financing moves and an economic recovery, Rite Aid has gone from losing $2.5 billion in 2009 to making $249 million in fiscal year 2014. That profit surge has carried over into fiscal 2015 with the company reporting trailing 12-month earnings of $329.5 million exiting its fiscal third quarter. 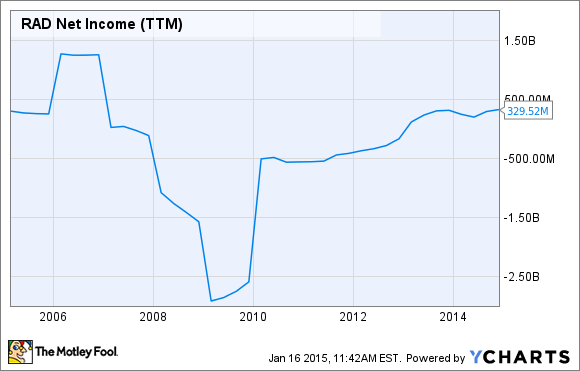 Less debt and better rates
The company's turnaround is impressive, and as a result Rite Aid's share price has jumped from less than $1 to more than $7, but investors could be right to expect the company's profit to head even higher. That's because Rite Aid continues to strengthen its balance sheet by restructuring its debt load and reducing its interest expense, which has dropped 28.9% since 2010. Rite Aid expects its interest payments will head even lower next fiscal year thanks to its recent decision to bump up its credit revolver from $1.8 billion to $3.7 billion. That move allows Rite Aid to extend out its debt maturity from February 2018 to January 2020. Importantly, restructuring its higher-cost debt to lower-cost debt will save the company $20 million a year in interest payments now and another $30 million per year once it refinances its 8% first lien notes in August. To put that $50 million in annual interest savings in perspective, consider that if those savings dropped dollar-for-dollar down to net income it would increase the company's current trailing 12-month earnings by 15%.

Reinvesting in growth
The debt savings are likely to help boost margins, but ultimately investors may be better served if Rite Aid uses some of those savings to ramp its growth plans. If so, remodels, new services, and new stores could all drive revenue and earnings significantly higher in the coming years.

For example, the company's top performing stores are those that have been updated to its Wellness format, so using savings to quicken the pace of its remodel plans could offer a big pay-off; especially since the company has only remodeled 1,529 of its 4,570 locations so far. Investing more money into new services, including chronic care health care programs for indications such as diabetes, smoking-cessation programs, and building more in-store health care clinics could help Rite Aid's sales grow, too.

Tying it together
Debt restructuring has been a key reason for Rite Aid's turnaround, but if Rite Aid hopes to transition itself from a restructuring story into a growth story it will need to strike a balance between margin growth and revenue growth. Rite Aid's trailing 12-month 2.91% operating margin is significantly below peers CVS Health's(CVS 0.35%)6.43% and Walgreens Alliance Boots' 5.49% levels, and both those competitors are arguably much further ahead of Rite Aid in their plans to tap into the revenue potential offered by aging baby boomers. Catching up to CVS Health and Walgreens won't happen overnight, but Rite Aid's friendlier balance sheet may give investors the right to be optimistic.

Todd Campbell is long Rite Aid. Todd owns E.B. Capital Markets, LLC. E.B. Capital's clients may or may not have positions in the companies mentioned. The Motley Fool recommends CVS Health. Try any of our Foolish newsletter services free for 30 days. We Fools may not all hold the same opinions, but we all believe that considering a diverse range of insights makes us better investors. The Motley Fool has a disclosure policy.