The problem with mutual funds

This is a great explanation of what's wrong with so much of the finance industry:

"The industry is about making profit for the fund advisor and fund advisors make profits by drawing and holding assets, and the way you draw and hold assets is by not scaring people," Snowball explained. "So if you can get a couple of decent years together and a decent story and then slide quietly into mediocrity, it's a recipe for success for your fund company, and a recipe for disappointment for investors."

Noise coming from your truck's engine might be fake:

Stomp on the gas in a new Ford Mustang or F-150 and you'll hear a meaty, throaty rumble — the same style of roar that Americans have associated with auto power and performance for decades.

It's a sham. The engine growl in some of America's best-selling cars and trucks is actually a finely tuned bit of lip-syncing, boosted through special pipes or digitally faked altogether. And it's driving car enthusiasts insane.

The yield on 1-year Swiss debt is now negative 1%: 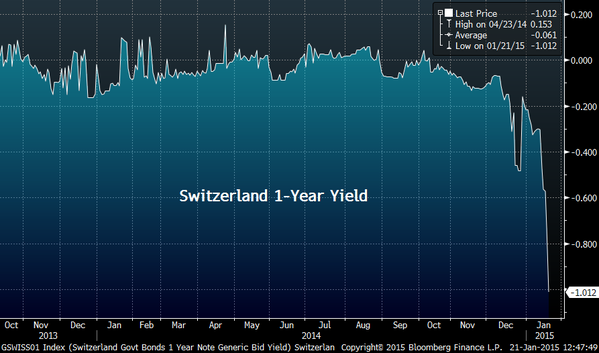 Here's an inevitable side effect of legalizing marijuana in the U.S.:

The supply of marijuana grown in the United States has become so abundant and cheap that in the regions of northern Mexico, where it used to be grown, farmers have taken to burning their crops.

Because of the increased domestic supply, it is no longer profitable for these Mexican farmers to grow, reap, and transport weed across the border.

They've decided there is more money in burning down their crops down and planting something else instead.

Millennials are about to take over baby boomers:

Americans are feeling much better about the economy: Smoking is increasingly a poor-person's habit:

In a 2008 Gallup poll of over 75,000 Americans, the rate of smoking among people making less than $24,000 a year was more than double that of those making $90,000 or more. In the era portrayed in Mad Men, smoking was a normative behavior that was not associated with poverty. Indeed, because they had less money and were more religious, the poor if anything were somewhat less likely to smoke than middle-class people. But once the health risks of smoking became widely known, the better-off began kicking the habit: high-income families decreased their smoking by 62 percent from 1965 to 1999, versus only 9 percent for low-income families.

McDonald's (MCD 1.12%) explains why it has 19 ingredients in its french fries. Watch and try not to barf:

Have a good weekend.

More from The Motley Fool: Where are the customers' yachts?

Morgan Housel has no position in any stocks mentioned. The Motley Fool recommends McDonald's and has a disclosure policy.