The slide clearly indicates Intel expected to have its 10-nanometer manufacturing technology in production by the end of 2015. Assuming such a product takes about two quarters to go from the start of manufacuturing to the shelves, this timeline suggested investors should expect 10-nanometer products to be available in the second quarter of 2016.

A year later, at its November 2014 investor meeting, Intel didn't say much about its 10-nanometer production timelines. In fact, both Krzanich and CFO Stacy Smith made these comments during one question-and-answer session:

Krzanich: We felt like we went out a little early with 14-nanometers as far as timing, performance, and features, and we saw, actually, competitors adjust to that. So we're going to be a little more prudent, smarter about signaling to the industry exactly when, what, and where.

Smith: On the spending side, it's a fairly normal cadence of spending, and I'm not going to be any more discreet than Brian was; we do think we've been giving too much insight too far in advance and so we'll talk about 10-nanometer sometime in the next 12-to-18 months, and when it's appropriate.

At first glance, this seems like a plausible explanation, but upon further reflection I'm not entirely sure it holds up. Let's take a closer look.

Just about everything in that list is typical for a new manufacturing technology generation. I'm not sure what competitors such as Taiwan Semiconductor (NYSE:TSM) and Samsung (NASDAQOTH: SSNLF) might have gleaned about 14-nanometer from this presentation that they didn't already know.

In fact, Intel didn't make a serious technical disclosure on its 14-nanometer process in terms of performance, power, or density until late this year at the International Electron Devices conference.

In fact, Intel probably said too much about 10-nanometer
With all this in mind, if Intel did disclose "too much," it might have been about its 10-nanometer technology. At the 2013 investor meeting, Intel claimed it would actually accelerate its cost-per-transistor improvements at the 10-nanometer node relative to the 14-nanometer node: 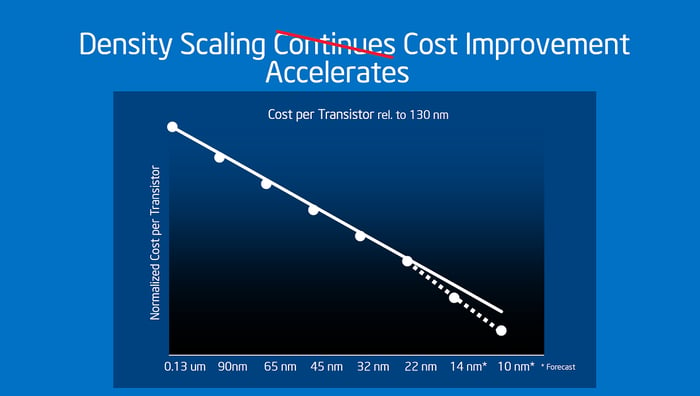 Intel also presented a slide in which it flat-out said that 10-nanometer would go into production during 2015. The cat is out of the bag, so to speak.

The mystery continues
At this point, I'm not entirely sure what Intel gains by keeping quiet on 10-nanometers. The company already disclosed its initial plans for 10-nanometer in 2013, and I don't think there's much chance it will accelerate its plans there. All this really does, then, is raise suspicion that Intel might be having "issues" with its 10-nanometer node similar to those seen with its 14-nanometer node.

But wait! In a recent interview with EE Times, Intel Senior Fellow Mark Bohr said the company doesn't expect to run into the issues that plagued 14-nanometer at 10-nanometer. The odds seem good that Intel's 10-nanometer development is progressing well enough.

I am truly stumped. What does Intel get out of keeping quiet about 10-nanometers after it has already made significant disclosures about cost-per-transistor and launch timing?