McDonald's (NYSE:MCD) has a problem that even $3 billion can't fix. The company made it official last week by announcing that global sales dipped in 2014. That was the first time since 2002 that the fast-food giant produced negative worldwide comps. 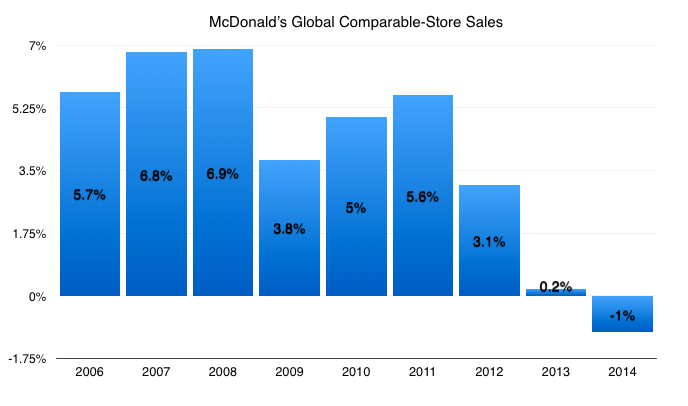 The prior year wasn't much better: Comps ticked higher by a miniscule 0.2% in 2013 while guest traffic fell by 2%. With fewer guests filing into its restaurants every month, it was just a matter of time before McDonald's growth streak hit a wall.

Changing the strategy
Sure, management has a plan for getting things back on track. It calls for reducing the complexity of the menu and increasing food customization, among other moves -- basically taking a page from Chipotle's winning playbook. The burrito slinger recently posted an amazing 20% comps improvement for its fiscal third quarter, its best result on that metric since going public in 2006.

But McDonald's knows menu tweaks and other operational improvements won't be enough to quickly turn things around. So the Golden Arches is making big changes to its financial strategy as profit growth slows. In particular, the company's new capital spending plan for 2015 shows just how fundamental its challenges really are.

McDonald's will invest just $2 billion on new store openings and in-store improvements this year, compared to $3 billion in each of the last three years. That would be Mickey D's lowest annual capital spending since 2009.

How to save $1 billion

The savings will mostly come from fewer new store openings. McDonald's plans to add just 1,000 locations around the world in 2015, 33% less than it targeted at the same time last year. CEO Don Thompson said in a conference call with investors that the paring back will focus on markets where the company is struggling the hardest, mainly the United States, Germany, Russia, and China. That should put less selling pressure on existing locations and allow the company to focus on returning them to solid growth before ramping store expansions up again.

Slicing $1 billion out of capital expenditures will also boost profitability, at least over the short term. For example, McDonald's dividend now has more room to march higher even if operating profits stall again this year. There will also be extra cash to spend on share repurchases, which totaled $3.2 billion in 2014. This new capital spending plan, in addition to the company's refranchising strategy, means McDonald's can easily deliver on its goal of returning as much as $14 billion in cash to shareholders in the next two years.

Still, as a shareholder I'm not excited about those returns. Yes, dividends and stock buybacks should stay strong over the next few years. But the money is not coming from a rebound in operations as much as from lower investments in the business. You could argue this is the right move while Mickey D's struggles through slower growth in the industry. But it's hard to see how reduced capital investment now will set McDonald's up for any better growth down the line.