Gold has had a good start to 2015, rising 7.4% through Friday and leaving the S&P 500 (SNPINDEX:^GSPC) trailing in its wake (see chart of the SPDR Gold Shares ETF (NYSEMKT:GLD) below). Recently, with traders anticipating the European Central Bank's, or ECB's, announcement of a landmark bond-buying program, the price of the yellow metal broke above $1,300 for the first time since August. (The ECB didn't disappoint, announcing a trillion-euro program.) As the market digests the significance of the ECB's dive into monetary experimentation, gold bulls see a reason to believe 2015 could end gold's two-year losing streak. 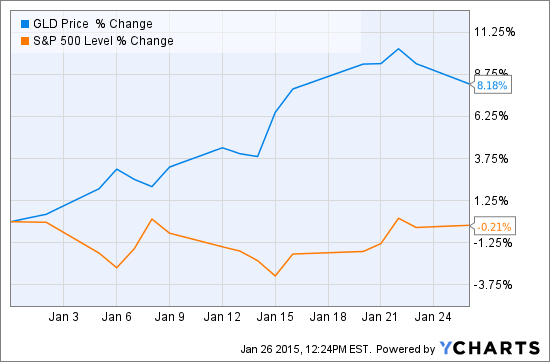 A positive narrative for gold

I think it entirely possible that this year will prove favorable to gold, as the divisions in the world economy come into sharper contrast. While the U.S. economy appears to be achieving "takeoff" velocity, the eurozone remains stuck in the doldrums. The start of quantitative easing in the eurozone coincides with a normalization of monetary policy in the U.S. Investors are still navigating treacherous waters, as oil's massive recent decline and this month's "Swiss surprise" illustrate.

Of course, the growing strength of the U.S. economy could be a prominent part of an opposite narrative that would see gold continue its long-term decline, its recent strength notwithstanding. Even were gold to put in a winning performance this year, however, what are its longer-term prospects? Gold faces two long-term headwinds: rising interest rates in the U.S. and "valuation."

The rate cycle reverses
The U.S. Federal Reserve is expected to begin raising interesting rates off their zero bound at some point this year. Empirically, we know the price of gold is inversely related to real interest rates, which is consistent with economic logic: Gold offers no yield; thus, as real interest rates increase, the opportunity cost of owning gold increases, making the metal less attractive. Most members of the Fed's monetary policy committee believe the federal funds rate will be somewhere in the range of 2%-4% at the end of next year (against zero now).

Second, gold is already "overpriced" -- I put the term between quotes, as I did with "valuation" above, because one cannot assign an intrinsic value to an asset that generates no cash flow. Nevertheless, if we compare the current price of gold to a long-term price series, adjusted for inflation, it will give us some idea of where we stand. The following chart shows: 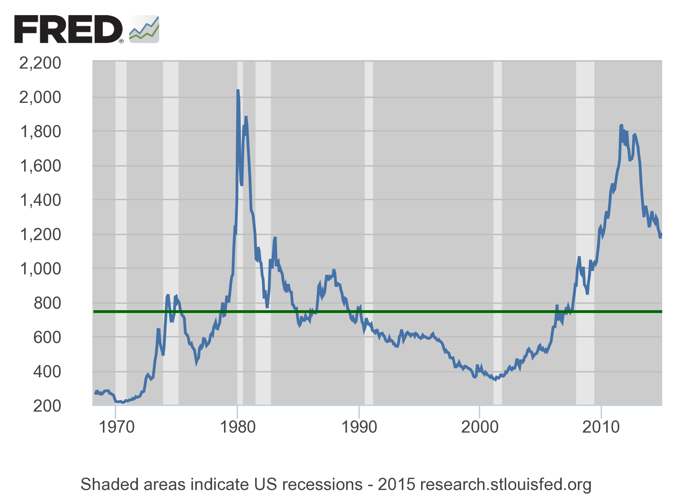 As the chart makes clear, at $1,300 per ounce, gold remains significantly above its long-term average price, in real terms, despite having fallen sharply from its September 2011 peak.

Cash flow over "cash no"
A value investor -- that is, a genuine investor -- is generally averse to the notion of owning gold because it has no intrinsic value (none that one can begin to estimate, in any event). There is no reason to alter that stance today; instead, one ought to continue to focus on owning outstanding businesses with pricing power.