Verizon Communications (VZ -2.80%) reported its fourth-quarter earnings last week. While it beat analyst estimates on the top line, posting revenue of $31.07 billion for the quarter, its earnings per share fell below analysts' expectations by a penny, coming in at $0.71. The company added 2 million net postpaid connections with the majority being tablets, a growth driver for the company going forward.

After the earnings release, CFO Fran Shammo spoke with analysts on a conference call. Here are five of the most important takeaways from Shammo's comments.

At a 1.14% churn rate, you should take that as we did not go to places where we do not financially want to go to save a customer.

Last quarter, Verizon's 1.14% churn was notably higher than its recent past. Verizon's previous two-year high for churn rate was 1.07% in the first quarter of last year. 1.14% is significantly higher than the 0.96% churn rate the company experienced in the same period in 2013 and the 0.95% in the strong upgrade cycle in the fourth quarter of 2012.

One driving force for churn may have been the iPhone upgrade cycle. As mentioned, many customers upgraded to a new iPhone in 2012 with a two-year contract. With those contracts expiring last quarter, some customers chose to go to competitors like AT&T (T -0.65%) or T-Mobile (TMUS -0.44%).

T-Mobile has put pricing pressure on the industry, and AT&T has started offering more value for the dollar in response. Verizon, meanwhile, has largely tried to position itself as a premium product with premium pricing, and Shammo says it's not going to change that.

Revenue growth is coming from upgrades

78% of our upgrades are what we would call strategic quality upgrades, and that means a 3G to 4G or basic to 4G.

Verizon added 1.5 million new 4G customers during the fourth quarter, and the company ended the year with about 54.7 million 4G smartphone customers. The goal for the company is to get nearly all of its customers on 4G smartphones. It currently has about 66% of postpaid connections on its 4G network, so there's still room to grow.

Converting 3G customers (of which Verizon has about 13 million) to 4G customers carries additional benefits besides higher revenue. Its 4G network is more efficient, so costs are reduced, and upgrading customers allows Verizon to re-appropriate its 3G spectrum.

Tablets are very, very good because, one, they make it more sticky at the account level; two, we get a recurring revenue stream, albeit lower than a smartphone but the subsidy on that is much reduced. ... It also increases the amount of usage and video uptake on the network, which is what we're driving to is the more usage to benefit on the bundles.

Tablets represent an opportunity to move customers up the ladder in its data plans, encouraging them to pay more for more data. As a result of the increased number of tablet users, More Everything subscribers used an average of 50% more data last quarter than the year-ago period. So, Verizon is able to grow revenue from adding new devices and upgrading data plans at the same time.

To be successful, companies need to generate free cash flow, which can be invested in their networks to attract and retain customers by providing a quality experience.

This is an obvious shot by Shammo at players like T-Mobile, which has been operating with negative free cash flow for more than a year now as it offers heavy promotions to attract customers. Meanwhile, AT&T has seen a decline in free cash flow as well, falling below Verizon's levels (which are boosted by its acquisition of Verizon Wireless). 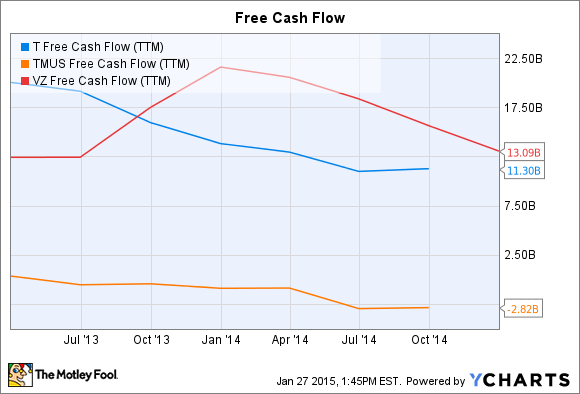 While Shammo didn't give any forward guidance on cash flow, he guided for an increase of at least 4% in revenue with consistent margins. Meanwhile, T-Mobile's management forecast positive free cash flow for 2015 at an investor conference earlier this month.

[What] we are planning for right now is that our Edge take rate probably increases to around 34%, 35% take rate.

Shammo projected that Edge -- which allows customers to upgrade early and pay for their device over 24 months rather than paying for it all upfront --  will grow even more popular this year. Last quarter, the percentage of phone activations on the Edge program reached 25%, more than double its third-quarter level.

Edge customers carry a couple of key benefits. First, subsidy costs disappear, and Verizon is able to book revenue for the full cost of the phone under device sales. Second, it actually makes the customer stickier. In AT&T's second-quarter earnings report, it noted the average customer lifespan on its Next program (which is similar to Edge) was 116 months versus 98 months on the subsidy model.

Nothing surprising
Verizon didn't report anything particularly surprising, and Shammo didn't make any comments that were out of the ordinary. While the company missed on the bottom line, it wasn't a big miss, and its outlook for 2015 remains largely unchanged. Shammo did a good job of outlining the important things to keep an eye on.

Adam Levy has no position in any stocks mentioned. The Motley Fool recommends Verizon Communications. Try any of our Foolish newsletter services free for 30 days. We Fools may not all hold the same opinions, but we all believe that considering a diverse range of insights makes us better investors. The Motley Fool has a disclosure policy.