Please ensure Javascript is enabled for purposes of website accessibility
Log In Help Join The Motley Fool
Free Article Join Over 1 Million Premium Members And Get More In-Depth Stock Guidance and Research
By Todd Campbell - Feb 1, 2015 at 7:03AM

Sales and dividend growth at these five companies could make them top stocks to own.

Last June, expanding Medicaid enrollment tied to the Affordable Care Act and retiring baby boomers embracing Medicare Advantage plans allowed UnitedHealth to boost its dividend by 34% to an annual rate of $1.50 (the following chart doesn't reflect the full year benefit of this increase yet). Whether or not UnitedHealth ups its dividend again this year isn't certain, but ongoing Medicare Advantage demand, additional states embracing Medicaid expansion, and UnitedHealth's decision to increase its participation in the ACA exchanges this year from four states to 23 suggest another increase could be in the cards. 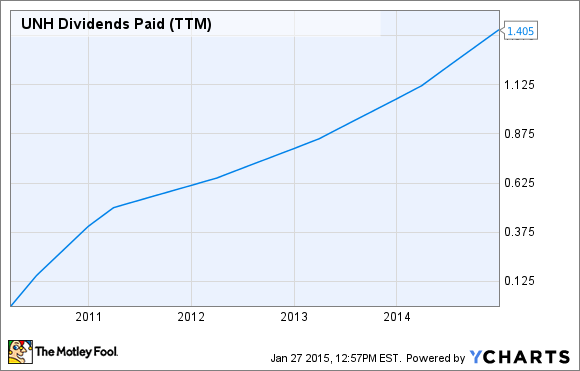 2. St. Jude Medical (STJ)
Investors who chose to avoid medical device companies over fears that healthcare reform, including the medical device tax, would derail them may want to reconsider them again.

That momentum should continue given that St. Jude's focus on heart disease means that demand for its devices should climb alongside the "graying of America." If so, St. Jude should be able to continue returning money to investors via dividends. After all, despite headwinds tied to healthcare reform, St. Jude's annual dividend payout has still increased 28.5% from $0.84 in 2010 to $1.08 in 2014. Again, the following chart doesn't yet reflect the full benefit of increases in the past year, but it serves to show just how dramatically dividends at the company have been growing. If the company continues to offset reform risk, then St. Jude could be in a position to deliver another dividend increase in 2015. 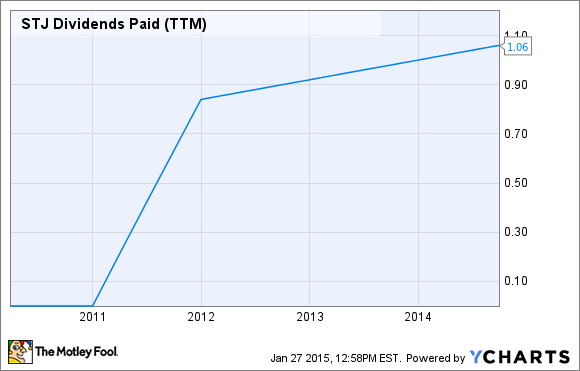 The company's top line sales growth has expanded by a compounded 14% annually since that year, leading to 15% compounded annual growth in earnings per share. That's a pretty impressive showing for a stodgy insurer. Even more impressive, however, might be Aetna's commitment to returning money to investors. During that span of time, it's paid out $1 billion to investors through dividends and another $7.4 billion through share buybacks.

Aetna expects to deliver full year EPS of between $6.60 and $6.70 for 2014, handily higher than the $6.25 forecast it issued last January. In the future, Aetna thinks that its total revenue opportunity from the healthcare insurance exchanges could be $7.5 billion in 2018, which would lead to $375 million in pretax operating profit that year (at mid-single-digit margins), and potentially deliver $10 per share in EPS. If the company can grow its premium revenue from the exchanges, Medicare Advantage, and Medicaid, it should be able to hit those targets and keep increasing its dividend -- something that its done pretty consistently over the past five years. 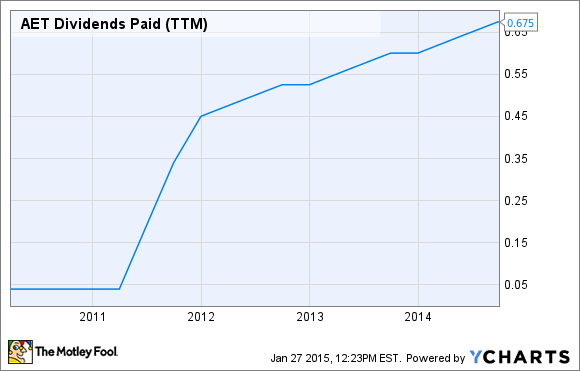 4. Omnicare (OCR.DL)
The Centers for Medicare and Medicaid Services, or CMS, estimates that drug spending will grow by 6.5% annually between 2015 through 2022. If so, drug distributor Omnicare could return even more money to investors through dividends. Older Americans consume far more prescription medications than younger Americans, and a great deal of that prescription volume comes from patients living in long-term care settings, where Omnicare is the largest drug distributor.

In addition to its leading position in the long-term care market, Omnicare is also enjoying rapid growth thanks to specialty drug programs and services. In 2010, specialty care represented just 9.5% of Omnicare's sales, but in 2014, specialty care revenue accounted for 26.4% of revenue. In the past year, the number of specialty drug scripts filled by Omnicare increased by 13%. Thanks to solid client retention rates in long-term care markets and specialty care sales growth, Omnicare's total revenue improved by 6.1% year over year to $1.608 billion and its adjusted EPS grew 6.8% year over year to $0.94 in the third quarter. As a result of that success, Omnicare has returned 29% more to investors via dividends per share through the year ending September 2014 than it did in the comparable period in 2013.

5. Shire Pharmaceuticals (NASDAQ: SHPG)
Investors have been increasingly intrigued by Shire in the past year, but not because of its rapid dividend growth. Interest has instead stemmed from AbbVie's (ABBV -0.06%) failed bid to acquire it.

Although Shire's product portfolio continues to make it an intriguing buyout candidate, investors might be better served focusing on how Shire's growth is allowing it to return increasingly more money to investors. Since 2011, Shire's trailing 12-month dividends paid has nearly doubled to $0.623 per share. 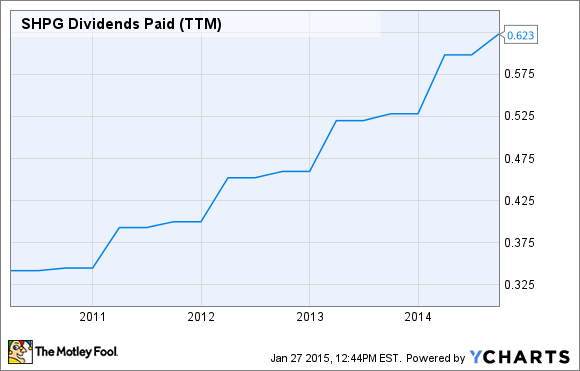 Shire's dividend-friendly policy owes thanks to a rapidly growing product line of drugs that have Shire predicting that its sales will double from $5 billion to $10 billion by 2020. Through the first nine months of 2014, Shire's revenue totaled $4.33 billion, up 25% from 2013. That growth came in part from seven different medicines that posted quarterly sales of roughly $100 million that each grew 19% or more year over year in the third quarter. The combination of rapid sales growth and operating efficiency that allows Shire to boast one of the best EBITDA to sales rates in the industry should allow Shire to increase its payout in the years ahead.

Tying it together
All five of these companies have one thing in common: They're all benefiting from healthcare's significant revenue tailwinds. There's always the risk that rapidly rising global healthcare spending will prompt measures that impact the profitability of these companies, but for now it appears that each is successfully navigating industry changes in a way that could make dividend investors confident in their ability to pay out even more money in dividends in the future.

Todd Campbell has no position in any stocks mentioned. Todd owns E.B. Capital Markets, LLC. E.B. Capital's clients may or may not have positions in the companies mentioned. My legal beagles won't let me ask them and their legal beagles won't let them tell me. The Motley Fool recommends UnitedHealth Group. Try any of our Foolish newsletter services free for 30 days. We Fools may not all hold the same opinions, but we all believe that considering a diverse range of insights makes us better investors. The Motley Fool has a disclosure policy.