Harley was back in the saddle once it returned the Road Glide to its lineup. Photo source: Harley-Davidson.

Harley-Davidson (NYSE:HOG) turned in a fourth-quarter earnings performance that might not have shown its engines revving, but at least indicated the motorcycle maker was not broken down on the side of the road. However, that might not be the case for much longer.

That was largely due to a 1.6% drop in U.S. motorcycle sales in the fourth quarter, which was too much for Harley to make up despite enjoying a more than 9% gain in international sales.

That should give investors a hint of the troubles lurking ahead for Harley-Davidson.

Whether it was the 260,000 bikes sold or the 270,000 shipped, its numbers remain down some 20% from the peak reached in 2006, when the company shipped almost 349,000 bikes and sold 344,000 of them. While Harley has certainly picked itself up after running off the road during the recession, that slowing sales growth rate signals trouble. 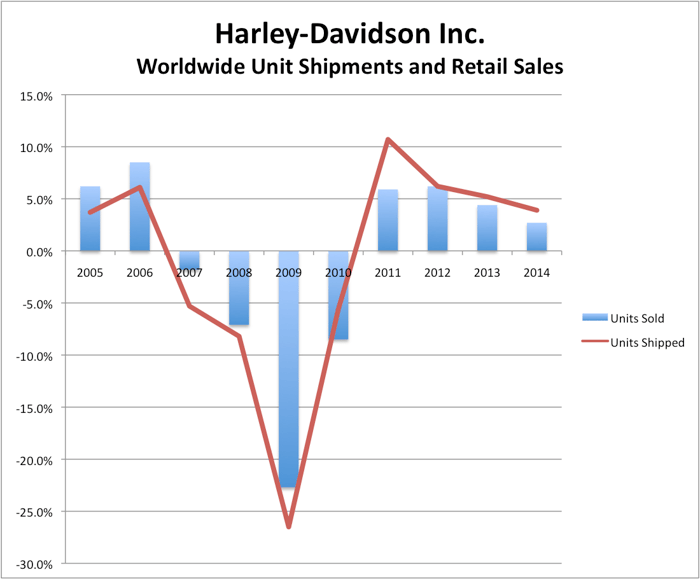 I would not go so far as to accuse Harley Davidson of channel stuffing, but considering the number of bikes it sold in the U.S. during the fourth quarter -- remember that domestic sales were down year over year -- it actually shipped 5% more motorcycles to U.S. dealers during that quarter. No doubt the company felt it was necessary to reach that bare minimum guidance for bikes shipped.

The international market continues to provide growth opportunities for Harley -- particularly in India, where sales doubled in 2014. In fact, Harley experienced all-time-high retail sales for the EMEA, Asia-Pacific, and Latin America markets. The one downer was Canada, where it experienced a 10.8% decline in retail sales for the year, undoubtedly exacerbated by some hefty price increases the company needed to implement to counteract currency effects.

Even so, Harley still derives almost two-thirds of its retail sales from the U.S., so the health of that market is paramount. And it is beginning to look weak again.

Shipments have only risen 4% in the U.S. over the past two years, and Harley is forecasting a 4% to 6% increase in shipments in 2015. Considering the push it had to make just to reach its downgraded guidance for last year, it would not be surprising to see Harley scale back that estimate as the year progresses.

Two points of light
Not everything in the recent report was so gloomy for Harley-Davidson. Two of its newest introductions remain popular: the Street bikes and the Road Glide.

The Street 750 and Street 500 runabout models were introduced in late 2013, targeted at younger, urban riders. In the fourth quarter, Harley reported double-digit sales growth of the Sportster and Street models. More important, those buying the Street are by and large new to the Harley brand.

Faster than a speeding train? The Street 750 was certainly first off the line in terms of sales in 2014. Photo source: Harley-Davidson.

The Road Glide also had a big comeback in 2014. The absence of this touring classic from the product lineup in the fourth quarter of 2013 caused Harley to record poor U.S. sales at the time. Indeed, the company lost 1.6 points of market share last year, primarily because the Road Glide was not available for the first six months.

Since its return, however, sales have been robust and represented about 14% of total U.S. retail sales in the fourth quarter.

Another speed bump
But that raises another problem for Harley. Based on the strength of the Street bikes and the Road Glide, and what Harley plans to ship for 2015, it indicates that much of the remainder of its bike lineup is weak.

That poses some difficult questions for investors. At 16 times 2014 earnings and under 15 times estimates for 2015, Harley-Davidson is not particularly expensive. But considering analyst expectations for earnings growth and factoring in what appears to be a dangerous slowdown in its sales growth rate, the bike maker is at best fairly valued.

I think this American icon has added a lot of mileage and wear since the Great Recession, and I'd wait for a discount before hopping on this iron horse.