Believe it or not, these numbers are much better than they were a decade ago.

Read the financial news with any regularity and you know we Americans could probably do a better job of saving money. But most people don't know that we're actually living within our means far better than we did just a decade ago.

According to Moody's Analytics, in 2006, the median American below the age of 54 -- which most of us are -- actually had a negative savings rate. Even worse, those age 44 and under averaged a savings rate worse than negative 10%!

Apparently, many folks have learned since the financial crisis that we don't need to finance our future to afford a house we don't need. 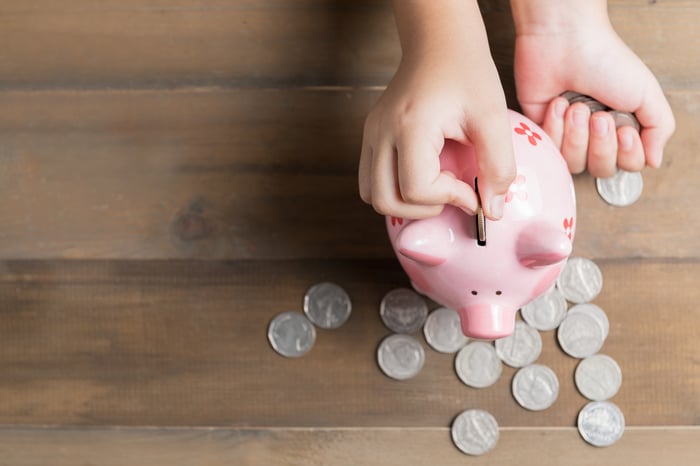 So how much does the average American now save? Instead of giving you just one number, we'll break out the data a bit more. The first two variables we need are the typical savings rate by age (provided by Moody's Analytics) and the median household income by age (courtesy of the U.S. Census Bureau).

Here's what we get:

As you can see, individuals under the age of 35, commonly referred to as millennials, presently have a negative savings rate. This wasn't always the case, as this age group was able to sock away as much as 5.2% of income in 2009. Since then, however, there's been a steady shift downward -- with some pointing the finger at heavy debt burdens from student loans.

That has led the typical American under the age of 34 to lose money annually for the past couple of years. So if you're young and putting away money right now, you're doing better than most.

The important thing to recognize here is that any money saved this year and invested in the stock market could return about 6.9% after adjusting for inflation, using historical returns as the benchmark.

Even investing small amounts of money can make a big difference, particularly for the younger generations. Consider: If a 35-year-old saved the average amount ($1,690) last year and invested it in the stock market for 30 years, it would be worth $12,500 in today's dollars by the time he or she retired.

There are lots of ways to boost your savings beyond the averages for your age. The lowest hanging fruit is to be very conscious about major purchases: things like your college education, a car, and a home. Our own Morgan Housel has detailed a way to make it through college without copious debt levels. He's also demonstrated -- convincingly -- that owning a home should be about the social/emotional benefits, not the financial ones.

Beyond these big ticket items, I'm a big proponent of finding your "Enough" level -- the baseline of what you need to live a happy, healthy, balanced life. Once you find that level, any increases in salary can go immediately into savings and investments.

If you can start these processes today and slowly increase the amount you're saving, it can go a long way in helping you reach financial independence. Of course, there are other, lesser-known ways of helping you retire comfortably, as highlighted below.

The $60K Social Security bonus most retirees completely overlook
If you're like most Americans, you're a few years (or more) behind on your retirement savings. But a handful of little-known “Social Security secrets” could ensure a boost in your retirement income of as much as $60,000. In fact, one MarketWatch reporter argues that if more Americans used them, the government would have to shell out an extra $10 billion… every year! And once you learn how to take advantage of these loopholes, you could retire confidently with the peace of mind we're all after. Simply click here to receive your free copy of our new report that details how you can take advantage of these strategies.