Amazon has finally pointed out that it's actually spending far more than it lets on.

Shares of Amazon (AMZN 0.15%) surged after the company reported its fourth-quarter earnings on Jan. 29, with investors focusing mainly on the small profit that Amazon managed during the holiday season. For the full year, Amazon posted a net loss of $241 million despite both double-digit revenue growth and generating nearly $2 billion of free cash flow.

Free cash flow has long been the metric Amazon points to as the best way to measure the company's performance, and Amazon certainly delivered on that front. But there's a problem with Amazon's free cash flow numbers: They ignore billions of dollars in spending that the company is financing through capital leases. Despite the impressive-looking free cash flow, Amazon is actually losing a tremendous amount of money, no matter how you slice it. I pointed this out in a previous article, which includes an explanation of exactly how Amazon accounts for its capital leases.

A funny thing happened during Amazon's conference call a few days ago. Instead of just touting its free cash flow figures and moving on, as it usually does, the company actually mentioned these massive capital leases, pointing out that it finances some of its spending in addition to the capital expenditures reported on the cash flow statement. The biggest piece of this financing is for Amazon Web Services.

Why does this matter? Here's a slide from Amazon's earnings presentation showing the company's reported free cash flow: 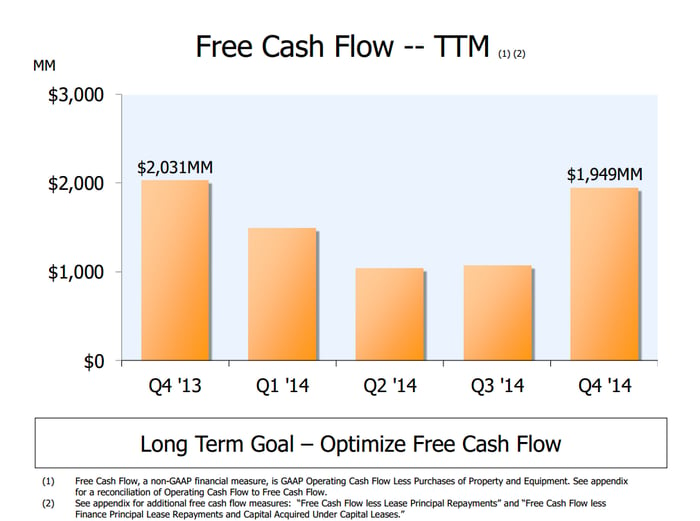 This is essentially the same slide that Amazon shows every quarter, with one important difference: The second footnote points to some additional free cash flow measures in the appendix, including one which adjusts for its massive spending via capital leases. This is the first time that Amazon has actively pointed out its capital lease activity beyond the required disclosures in its financial statements. What does this slide look like? 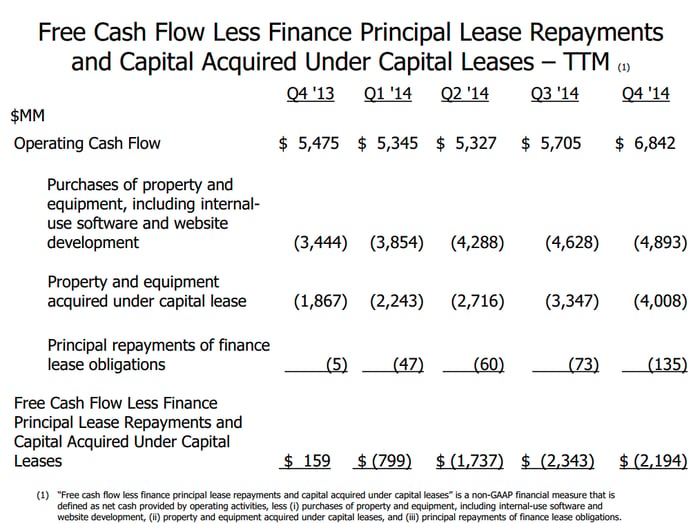 This changes the story pretty dramatically. Along with the $4.9 billion Amazon spent directly on capital expenditures during the past year, it also committed an additional $4 billion through capital leases. While this $4 billion doesn't represent a cash expense today, these capital leases will have to be paid for during the next few years.

During the past 12 months, Amazon paid about $1.3 billion in capital lease payments, erasing most of its reported free cash flow. These payments are considered financing cash flows, therefore excluding them from the free cash flow calculation.

These payments are only going to rise as Amazon finances more of its spending. Next year, Amazon expects to spend a little more than $2 billion paying for these capital leases, according to its 10-K, excluding any additional capital leases that the company enters into next year. This will effectively wipe out any reported free cash flow, and these payments will continue to rise unless Amazon curtails its capital lease activity.

The second slide above shows how much Amazon is truly investing in its business. Unlike other companies with big public cloud business, like Microsoft and Google, Amazon doesn't have billions of dollars in profit coming in from other businesses to finance all of this growth. During the past 12 months, Microsoft spent $5.3 billion in capital expenditures, with much of this going toward growing its cloud business. Google spent a staggering $9.7 billion.

If Amazon wants to remain competitive in cloud computing, it can't slow down its spending. But it also can't afford to keep spending as heavily as it has been. Amazon's reported free cash flow numbers make it seem like the company can invest heavily and still manage to generate cash. Well, it can't. Not even close.

Amazon's long-term goal is to optimize free cash flow; but its reported free cash flow is meaningless if it doesn't adjust for capital leases, or at the very least, payments on those capital leases. I applaud Amazon's management for finally pointing out these capital leases to investors, as they are extremely important in order to truly understand Amazon's business. But the company is still touting its nearly $2 billion in free cash flow as if it means something. It doesn't.

If Amazon keeps doing what it's doing, the company is going to be taking on a lot more debt during the next few years. It paid $210 million in interest during 2014, completely wiping out its operating income for the year, and this number will only rise if this heavy spending continues.

It turns out that Amazon isn't some sort of magical cash machine, able to generate $2 billion of free cash flow while reporting far lower, or even negative, earnings, all the while investing heavily in capital-intensive businesses. Instead, it's a company that's borrowing billions of dollars in order to finance its growth, using lease accounting to make it appear profitable on a free cash flow basis. There's nothing wrong with what Amazon is doing, but investors need to wise up to these sorts of accounting games.