Apple's (NASDAQ:AAPL) first-fiscal quarter of 2014 couldn't have gone any better. The company crushed all expectations. While there were a number of impressive numbers from the release, one of the most intriguing metrics was Apple's gross profit margin. The higher-than-expected figure joins an ongoing story about Apple's monstrous level of profitability, vouching for the company's pricing power and economies of scale.

What drove the awesome performance behind Apple's gross profit margin? While a number of factors likely played a role in the gain, Apple's huge iPhone sales during the quarter are undoubtedly central to the company's big gain in profitability. As the company's most profitable business segment, soaring iPhone sales is good for Apple's profitability. iPhone unit sales soared 46%, and iPhone average selling price jumped from $637 to $687. The result was iPhone sales swelling to 68.6% of revenue, up from 56% of revenue in the year-ago quarter.

Are high profit margins sustainable after all?
The good quarter for Apple's gross profit margin metric joins a string of year-over-year gains in the important metric that began the second quarter of 2014, following a long period of negative year-over-year comparisons that had investors worrying whether or not the tech giant could sustain its high levels of profitability as cheap smartphones flooded the market.

In a chart, Apple's profitability story looks like this. 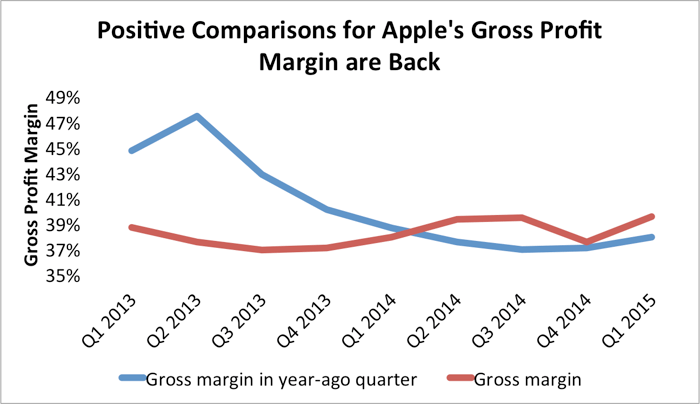 As it turns out, cheap smartphones weren't Apple's doom after all.

Obviously positive comparisons for gross profit margin are not sustainable forever. Indeed, Apple is guiding for a gross profit margin midpoint of 37.5% in Q2, a figure 40 basis points lower than its year-ago gross margin. And with Apple achieving such a high level of profitability in recent quarters, year-over-year comparisons going forward are going to be tough.

But the important takeaway is that Apple's gross profit margins are clearly not on the decline, as some Apple critics argued they were in 2012 and 2013. Apple's loyal customer base, pricing power, and economies of scale may be more sustainable than the market imagined. And if this is the case, it begs the question: Should Apple really be trading at just 16.1 times earnings?