a buffer against a sluggish European market and collapsing oil prices. In fact, lower oil costs could be a boon for the maker of everything from Scotchgard to Post-it Notes heading into 2015.

To get a sense of what's driving 3M's growth, let's take an in-depth look at three insights from the recent report.

1. All five businesses boosted 3M's revenue
Steady, evenly spread sales growth is becoming a fixture among 3M's five key businesses. Included in this portfolio are industrials, safety and graphics, electronics and energy, health care, and consumer, all of which posted positive organic revenue growth for the sixth consecutive quarter.

Like other multinational companies, however, currency fluctuations rained on 3M's parade. In local currencies, organic growth came in at 6.3%. But with the conversion to a strengthened U.S. dollar taken into account, sales only inched up by 2% for the quarter.

Still, earnings per share rose 11.7% year over year to $1.81, besting the average of analysts' estimates by a penny: 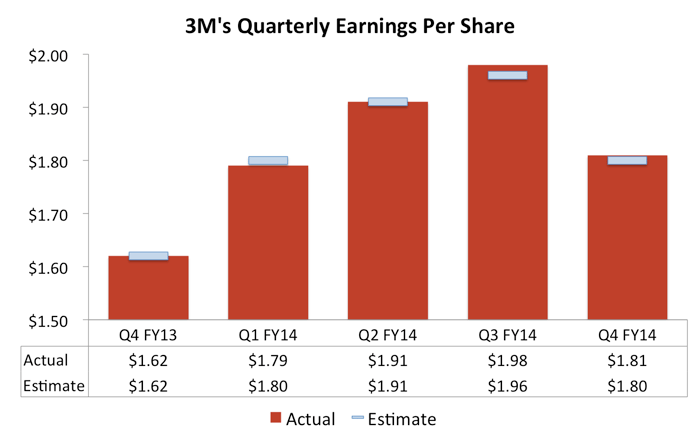 Again, this quarter was defined by a balanced performance. All of 3M's geographies increased sales by at least 3%, with the Latin America/Canada segment leading the way with 9% year-over-year growth. And four out of the five business groups generated operating margins greater than 20%, while overall operating margins were up 0.6 percentage points to 21.5%.

For investors, consistently rising operating margins tell a promising story. 3M has incredible pricing power relative to its peers, a tight grip on costs, and thus an operating margin that towers over the industry average of 15%.

2. Lower oil, bigger opportunity
Most investors prefer stability to drastic, inexplicable price fluctuations. So oil's recent dip has been met with some hysteria. That's not how one should look at plunging oil prices when evaluating a company like 3M.

As my colleague Bill Barker described in an excellent piece on recent energy trends, a sustained drop in the oil market can present as much opportunity as it does pain for your portfolio, depending on how you place your bets. 3M's management made it clear that they see this trend in commodity prices in a positive light; Gangestad said in the conference call, "Raw materials were again lower versus last year's comparable quarter. Commodity prices declined as we closed out Q4 and we expect these tailwinds to accelerate in 2015."

3. Dividends, buybacks and other rewards for investors
3M's earnings growth is all the more admirable when it's translating into cold, hard cash for investors. That implies that the company is converting cash flow, investing in internal growth initiatives, and setting aside a healthy amount for shareholders.

In 2014, 3M generated $6.6 billion in operating cash flow and dedicated $1.5 billion of that to capital expenditures. Then it allocated a sum of $7.8 billion to shareholders: $2.2 billion in dividends and $5.6 billion in share repurchases. The amount dedicated to dividends and buybacks exceeds cash flow because 3M has embarked on a significant buyback initiative that involves taking on additional debt. With a debt-to-equity ratio of 0.32, this is not cause for concern at a company like 3M. But shareholders who think the stock is a little rich could feel queasy about the buyback spree. Management sees it differently, however, and hopefully that bodes well for the share price.

What's ahead for 3M
3M is proving that it's not a company that's tightly bound to economic growth, but one that continues to innovate and carve out new pockets of growth. Investors have been on a joyride over the past two years as a result: In 2013 and 2014, the diversified manufacturer stock outperformed the S&P 500 by an average of 13.65% and bested its industrial peers by an average of 16.3%. Even after 113 years in business, the conglomerate out of St. Paul, Minnesota, still has legs, and I think it will continue on its impressive run.