Even as orders from Europe and "growth" markets dipped during the quarter by 9% and 7%, respectively, an 18% order increase in the U.S. illustrated how important the domestic market remains for GE. On the bottom line, the conglomerate posted an earnings-per-share figure that was a penny more than analysts' expectations, as shown in fourth-quarter 2014 below: 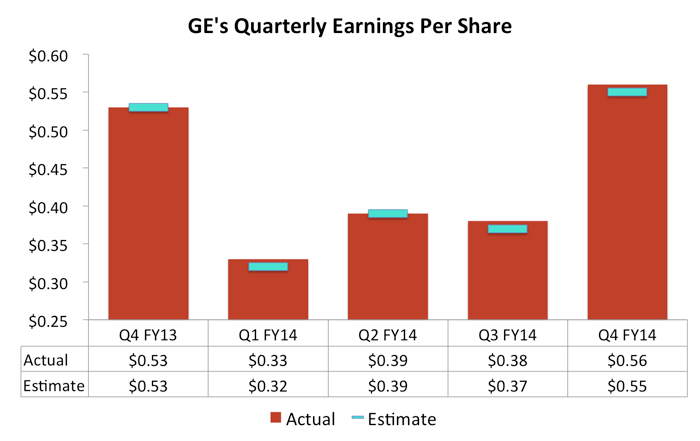 For investors, it was a reassuring quarter given the volatility in the global oil market. Looking ahead, this will be one of a handful of key stories to watch in 2015. With that in mind, let's take a closer look at what we learned from GE on Friday.

1. Tumbling oil prices are a burden...
Low oil prices will dampen the results for GE's oil and gas segment, but not as significantly as you might expect. During the quarter, this segment posted a sales decline of 6% and a 1% uptick in profits, yet these figures are slightly misleading. If you remove the effects of foreign currency exchanges and a one-off "disposition impact," oil and gas actually delivered flat revenue and a 6% increase in profits. These might seem like modest results, but they're quite impressive when you consider that oil prices collapsed by 40% from June to December 2014.

Looking ahead, GE's oil and gas business will probably face a challenging environment in 2014 -- orders already dipped 10% in the fourth quarter -- but this segment contributes only 15% of industrial earnings. CFO Jeff Bornstein noted that a "potentially tougher oil and gas scenario is manageable" given GE's goals for 2015. And based on my observations thus far, there's good reason to believe the drag on growth won't be too severe.

2. ...but electrical power is fueling growth
If one energy market is slumping, another could pick up the slack. GE power and water -- the company's largest segment -- continues full steam ahead. Revenue increased 22%, and segment profit increased 13% year over year in this business.

Power and water revenue of $9.4 billion equated to 30% of GE's industrial segment revenues for 2014. If all goes according to plan with the integration of the assets from France's Alstom, GE forecasts that power and water operating profit will grow by double digits in 2015.

3. For GE, U.S. economy is strongest in years
While it's difficult to quantify, there's no question that lower oil prices can serve as a catalyst for consumer spending and the U.S. economy at large. And that's probably why GE seems confident about 2015. CEO Jeff Immelt remarked on the conference call that "the U.S. [market] is the best we've seen since the financial crisis."

What's more is that management attached a number to revenue expectations during the December investor outlook -- the first time the company has done so in years. Immelt suggested GE would be able to grow the top line by 2% to 5% in 2015, which would mark the second straight year of revenue growth. GE's revenue had fallen steadily for five straight years up until 2014's 4% sales increase.

There were no revisions made to that guidance as part of Friday's earnings release, which implies that further declines in oil prices have not derailed expectations.

4. GE's cost cuts are boosting margins
Apart from GE's pivot from banking to industrial, the company had a lot of success in streamlining its back-office functions. On a year-to-year comparison, corporate operating costs decreased by $953 million from 2013 to 2014. This "cost out," as GE puts it, includes reductions in pension expenses and overhead at its headquarter offices. Steady progress for two straight years should give investors confidence that GE can continue to boost margins by getting more efficient through 2016, as indicated below: 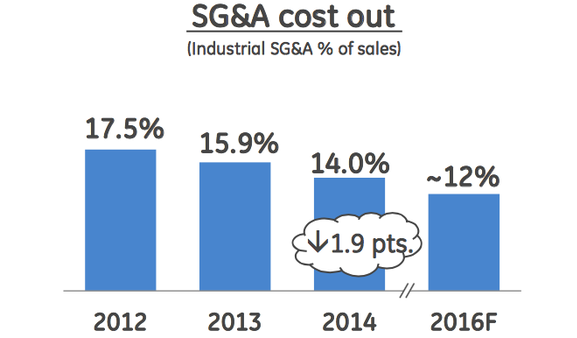 5. Synchrony could fund a roughly $9 billion dividend in 2015
GE's dividend has been a hotly debated topic since the company was forced to cut the payout in 2009. Since then, however, management has steadily reversed that trajectory year after year. The latest report revealed two interesting insights into GE's cash-generating ability and payout strategy:

A payout propelled by Synchrony: As GE looks to split off its remaining interest in Synchrony Financial, shareholders could receive a handsome payout as a result. GE forecasts a $9 billion dividend and a total of $10 billion to $30 billion returned to investors during 2015 (including buybacks). This compares to a combined total of $11 billion in 2014.

What a Fool believes
Though the year has come to an end, there's still a lot of unfinished business from 2014 that GE will have to tend to in the year to come. This includes the Synchrony spinoff, the integration of Alstom, and the appliance business spinoff. GE expects all of these to be wrapped up by the end of 2015.

These won't be easy tasks, but fortunately for investors, management has shown it can deal with complexity and volatility with poise. As a shareholder, I continue to believe GE's push to become a simpler and more focused company will pay off in the long run.