Microsoft (NASDAQ:MSFT) and Intel (NASDAQ:INTC) are often considered the two halves of the "Wintel" PC empire. Their core businesses are obviously different, but the two companies also share similarities -- both are "mature" tech stocks, both are diversifying away from their core competencies by investing in new technologies, and both pay decent dividends to income investors. 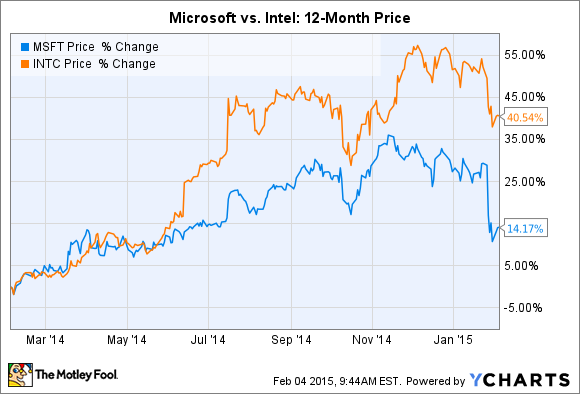 Microsoft and Intel currently pay forward annual dividend yields of 3.1% and 2.9%, respectively. But as income investors know, a bigger yield doesn't necessarily make for a better dividend stock. Instead, we should also compare payout ratios, historical dividend growth, and earnings growth. Therefore, let's take a closer look at Microsoft and Intel to see which tech titan is the better long-term income stock.

Payout ratio and dividend growth
A stock's payout ratio, or the percentage of its earnings paid back to investors as dividends, is generally considered a measure of a company's "generosity." However, lower payout ratios also indicate a company has more room to comfortably raise its dividend, while higher payout ratios can mean the dividend might be unsustainable.

Over the past 12 months, Microsoft has paid out 46% of its earnings as dividends, while Intel has paid out 42%. This tells us both companies have plenty of room to increase their payouts.

However, an interesting pattern becomes apparent when we compare the companies' history of dividend increases -- Microsoft's year-to-year dividend increases have consistently been higher and more frequent than Intel's over the past decade. 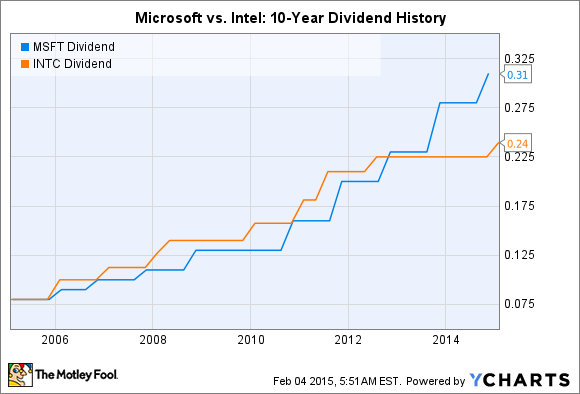 The Wintel Empire strikes back
But without solid earnings growth, boosting dividends can be tough. Both Microsoft and Intel were caught by surprise when mobile devices -- powered by Apple (NASDAQ:AAPL) and Google (NASDAQ:GOOG) (NASDAQ:GOOGL) operating systems and running on ARM Holdings (NASDAQ:ARMH) designed processors -- disrupted their core PC market over the past few years.

To keep up in the mobile race, Microsoft acquired Nokia's (NYSE:NOK) handset division last year, dramatically slashed Windows license prices, gave out free trials of Office 365, launched free Office apps for iOS and Android, and is offering Windows 10 as a free upgrade. In other words, it started valuing user growth over market share, in hopes of tethering more users to its cloud-based ecosystem. But all of those strategies weighed down its bottom line. Last quarter, Microsoft's Windows OEM Pro and non-Pro revenue fell 13% year over year, and its earnings per share slipped 9%.

Meanwhile, Intel has been buying its way back into the mobile market by heavily subsidizing OEMs for making Atom-based smartphones and tablets. Those subsidies, which include co-marketing agreements, financial assistance to help OEMs redesign logic boards, and steep discounts on Atom chips, caused Intel's mobile segment to post a $4.2 billion loss in 2014 -- down from a loss of $3.1 billion in the previous year. On the bright side, its core PC and data center businesses posted strong double-digit growth, profit at its fledgling Internet of Things, or IoT, group climbed 12%, and its EPS improved by 45%.

Earnings expectations
Wall Street analysts, on average, expect Microsoft's earnings to decline by 7% year over year in fiscal 2015 before bouncing back 20.5% in 2016. As Microsoft consolidates the PC market with the launch of Windows 10 and generates more revenue from its cloud-based services, earnings should rise again.

Intel's earnings are expected to improve by less than 3% year over year in 2015 and by nearly 10% in 2016. That growth depends on Intel's ability to keep dominating the PC and server markets -- both tough markets for ARM to crack due to their dependence on legacy x86 software. Meanwhile, Intel's mobile losses are expected to widen as it swaps margins for market share, but it's still a small market for the company. Recent investments in wearable tech and IoT chips could also pay off as that market grows.

The verdict
I believe both Microsoft and Intel are solid income stocks. However, Intel narrowly tops Microsoft due to two main reasons.

First, Intel's trailing P/E of 15 is slightly cheaper than Microsoft's 17. Second, Microsoft faces more bottom-line risks as it gives away more free products to wage its asymmetrical war against Google. Intel is fighting an asymmetrical war of its own against ARM with mobile subsidies, but its mobile business represents a much smaller part of its top line than do Microsoft's Windows and Office cash cows.

For more predictable price and income performance over the foreseeable future, I'd pick Intel over Microsoft.